Urban Wetlands: A Review on Ecological and Cultural Values
Previous Article in Journal

Assessment of the Contribution of Rainwater Collection to Crop Production on Udo Island, Korea

The assessment of the degree to which biological communities in streams impaired by acid mine drainage (AMD) are restored by passive treatment has focused primarily on eukaryotic-cell organisms and microbial processes. The responses of microbial community structure to passive treatment have received much less attention, even though functional processes such as nutrient cycling and organic matter decomposition depend on taxonomic composition. Our objective was to determine the degree to which passive treatment restored microbial communities in three types of habitats: aqueous, leaf, and sediment. To assess their recovery, we compared the community composition in these habitats based on 16S rRNA gene sequencing at three different stream sites: an untreated AMD site (U), a remediated site below AMD passive treatment (T), and an unimpaired reference site (R). The acidity, conductivity, and soluble metal concentrations at T were found to be elevated compared to R, but generally 1–2 orders of magnitude less than at U. Microbial community composition was found to be synergistically affected by habitat type and AMD impact, with the similarity among communities in the three habitats increasing with the severity of the AMD. Sediment- and leaf-associated microbial communities at U were characterized by taxa that are tolerant to severe AMD. The absence of the nitrogen oxidizing bacterium Nitrospira in sediment communities at T and U was found to correspond to higher NH4+ concentrations compared to R, possibly because of the presence of iron oxyhydroxide precipitate. In contrast, the microbial composition was found to be similar between the T and R sites for both aqueous and leaf communities, indicating that passive treatment was more able to restore these communities to the reference condition than sediment communities. The remediation of AMD streams should consider the habitat-specific responses of microbial community composition and be guided by future studies that empirically couple changes in taxonomic composition to measured functional processes. View Full-Text
Keywords: anoxic limestone drain; nitrification; leaf decomposition; mining restoration; stream microbes; stream bacteria; biofilms anoxic limestone drain; nitrification; leaf decomposition; mining restoration; stream microbes; stream bacteria; biofilms
►▼ Show Figures 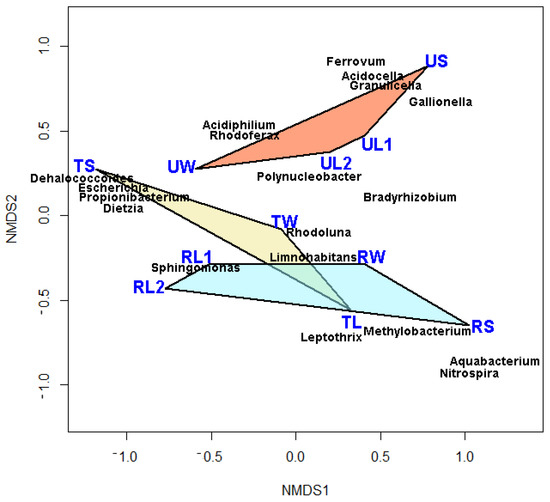