The MWDs involved in the study are considered “point of use”, meaning that they are connected to a main potable water network (Figure 1).
A dedicated pipeline containing a removable filter with a pore size of 1 mm was used to remove particulate matter that could be delivered from the municipal water. The main water flowed through an internal activated carbon filter with a pore size of 0.5 µm, which reduced tastes, odors, and various organic and inorganic substances (e.g., clays, chlorine, etc.), as well as potentially disinfectant chemicals used in municipal water. The MWDs showed an approximate capacity of 20–28 L/h and were provided by a single, low-pressure UV lamp at the output water supply point. The lamp consisted of a small, glass tube encircled with a power of 1.5 W. The MWDs provided water at room temperature, sparkling water (by carbon dioxide gas cylinder), and hot water, via a circular supply point (nozzle). The water was supplied by a single nozzle located at the base of the dispenser, which had a capacity of 30 cL. The technical characteristics of MWDs were provided in the manufacturer’s manuals and conformed to the Italian directives [11].
The MWDs involved in this study were installed in several industrial sites (e.g., coffee break areas, offices, recreational points, etc.) and the intended use was especially to provide drinking water in common or private spaces, not catering use, as admitted. Moreover, in Italy, it is mandatory to notify the presence and use of MWDs to the Public Health Authorities [31] only when these devices are in use in hotels, canteens, restaurants, and cafés; therefore, their presence in other facilities often is underestimated, with a lack of authority control.

An established program of routine and extraordinary maintenance procedures of MWDs is considered a key factor to prevent bacterial growth and the colonization of MWDs’ pipelines or the point of use, to guarantee water quality and safety for consumers.
The results obtained in our previous study [30], where two different typologies of MWDs (Type A and Type B) were compared to test their performance on drinking water treatment, demonstrated how the MWDs called Type B showed a higher microbial contamination for all parameters tested. Considering the number of these devices located in the company (n = 57), a specific WSP was developed according to the Company’s environmental heath safety office.
Following the manufacturer’s instructions, the MWDs were subjected to a follow-up study from 2017 to 2021, to evaluate the WSP effectiveness, through water quality supply monitoring.
The WSP consisted of various maintenance and sanitation procedures, as well as the water quality assessment.
In the following bullet points are reported the activities undertaken:
Given that the chemical products used for this procedure contained corrosive acid and alkaline substances, it was important to provide the staff involved with protective equipment (e.g., gloves, visor, etc.) in addition to considering the disinfection concentration, contact time, and the volume of water supplied.
A qualified and professional staff were identified and informed regarding the chemical and microbiological risk, in order to safely perform MWDs’ functional and maintenance protocols. Moreover, each of above bullet points were recorded on a maintenance register, validated by the Maintenance office.

All statistical analyses were performed using R software (version 4.0.5, “Shake and Throw” R Foundation for Statistical Computing, Vienna, Austria). DataMaid R package was used to generate a baseline descriptive analysis, including frequency, median, mode, and interquartile range values on numeric and categorical variables [40]. A Shapiro–Wilk test evaluated if the data of temperature and HPCs’ variables came from a normally distributed population. Spearman’s rho rank test was calculated to detect a possible correlation between temperature and HPCs. Graphical representations of HPCs’ contamination trend during the years were elaborated with ggplot2 [41].
A Wilcoxon–Mann–Whitney test was used to compare the two groups of HPCs at 36 °C and 22 °C values above and below the 25 °C temperature value established by the Guidelines for Drinking-Water Quality. The same test was used to compare the heterotrophic bacteria contamination detected from the beginning (2017) to the current data (2021) of the drinking water surveillance program, and to compare contamination levels pre-COVID (2019) and post-COVD (2021) lockdown periods, included in this study.
Bacteriological data were expressed as mean contamination ± standard deviation (SD) of positive samples. The p-values (p) < 0.05 were considered statistically significant.

The outcomes of this work prove the long-term effectiveness of the WSP followed by the company and the consumers, in addition to the role of a multidisciplinary approach established to assure the drinking water quality, according to the International and National directives. In addition, this study suggests a need to implement more rigorous microbiological monitoring to apply to MWDs’ environment, underestimated to date, despite the large diffusion of these devices in the communities.
Lack of awareness and knowledge on these issues, in addition to missing systematical control by users as well as by public health authorities, can lead to a high risk to human health, especially in hospitals and, in general, in all health-care settings, where the use of MWDs is already widespread and the presence of immunocompromised people could increase the risk of infections.
Moreover, these findings assume a relevant importance even across new scenarios: the higher request for plastic reduction, the introduction, starting from January 2021, of the new European Directive 2184/2020 on the quality of water intended for human consumption focused to implement a WSP approach in all facilities, and the introduction of new microbiological parameters in order to assure the water quality, such as, for example, Legionella spp. [45]. Considering the habitat, the pathogenic role, and the impact on public health demonstrated for these bacteria, the sanitation and maintenance procedures of MWDs will play a relevant role to preserve the water quality.

S.C. and M.M. conceived the study, designed the experiments, and wrote the paper. S.S. performed the statistical analyses. M.R.P., L.G., and G.C. performed the sample collection and experiments. All authors have read and agreed to the published version of the manuscript.

The authors would like to thank the Company for the sampling and Water Safety Plan drafting and Federica Marino for suggestions. 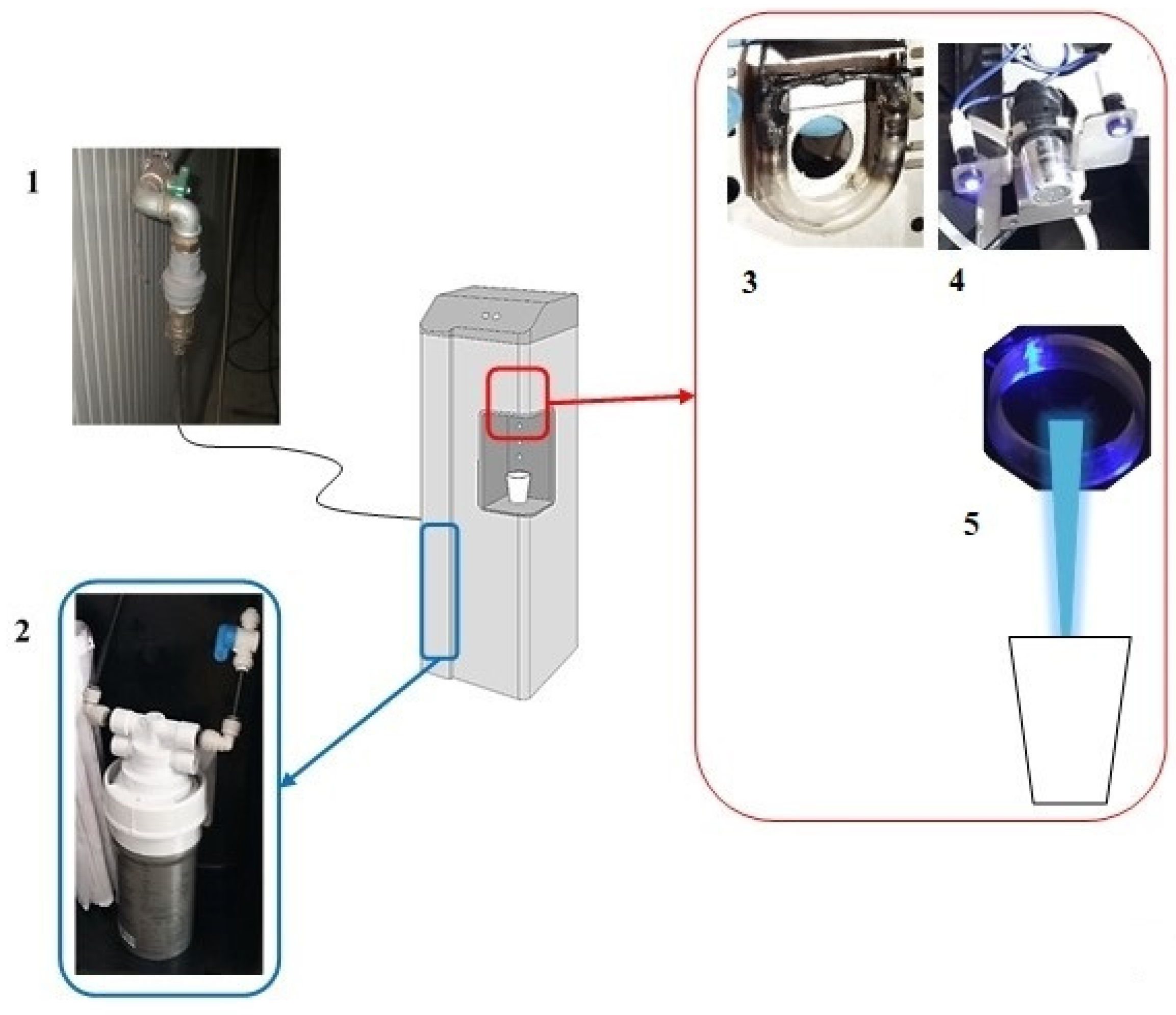