The impact of climate change on droughts in the Lake Titicaca, Desaguadero River, and Lake Poopo basins (TDPS system) within the Altiplano region was evaluated by comparing projected 2034–2064 and observed 1984–2014 hydroclimate time series. The study used bias-corrected monthly climate projections from the fifth phase of the Coupled Model Intercomparison Project (CMIP5), under the Representative Concentration Pathway 8.5 (RCP8.5) emission scenarios. Meteorological, agricultural, and hydrological droughts were analyzed from the standardized precipitation, standardized soil moisture, and standardized runoff indices, respectively, the latter two estimated from a hydrological model. Under scenarios of mean temperature increases up to 3 °C and spatially diverse precipitation changes, our results indicate that meteorological, agricultural, and hydrological droughts will become more intense, frequent, and prolonged in most of the TDPS. A significant increase in the frequency of short-term agricultural and hydrological droughts (duration of 1–2 months) is also projected. The expected decline in annual rainfall and the larger evapotranspiration increase in the southern TDPS combine to yield larger projected rises in the frequency and intensity of agricultural and hydrological droughts in this region. View Full-Text
Keywords: drought; climate change impacts; Titicaca basin; Andes; Altiplano drought; climate change impacts; Titicaca basin; Andes; Altiplano
►▼ Show Figures 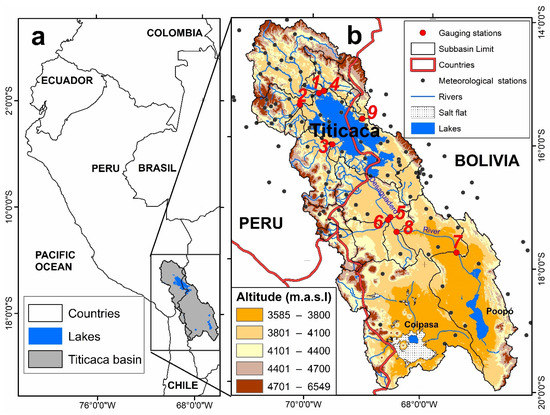