Efficient management of water distribution networks (WDNs) is currently a focal point, especially in countries where water scarcity conditions are more and more amplified by frequent drought periods. In these cases, in fact, pressure becomes the fundamental variable in managing the WDNs. Similarly, WDNs are often obsolete and affected by several points of water losses. Leakages are mainly affected by pressure; in fact, water utilities usually apply the technique of pressure management to reduce physical losses. It is clear how pressure plays a fundamental role in the management of WDNs and in water safety. Even though the technologies are quite mature, these systems are often expensive, especially if a capillarity monitoring system is required; thus, water managers apply the measurement of the flow rate and pressure at very few points. Today, the implementation of the Internet of things (IoT) can be considered a key strategy for monitoring water distribution systems. Once the sensors are installed, in fact, it is relatively easy to build a communication system able to collect and send data from the network. In the proposed study, a smart pressure monitoring system was developed using low-cost hardware and open-source software. The prototype system is composed of an Arduino microcontroller, a printed circuit board, and eight pressure transducers. The efficiency of the proposed tool was compared with a SCADA monitoring system. To investigate on the efficiency of the proposed measurement system, an experimental campaign was carried out at the Environmental Hydraulic Laboratory of the University of Enna (Italy), and hydrostatic as well as hydrodynamic tests were performed. The results showed the ability of the proposed pressure monitor tool to have control of the water pressure in a WDN with a simple, scalable, and economic system. The proposed system can be easily implemented in a real WDN by water utilities, thus improving the knowledge of pressure and increasing the efficiency level of the WDN management. View Full-Text
Keywords: Arduino microcontroller; information and communication technologies (ICT); water distribution network; experimental pipe network Arduino microcontroller; information and communication technologies (ICT); water distribution network; experimental pipe network
►▼ Show Figures 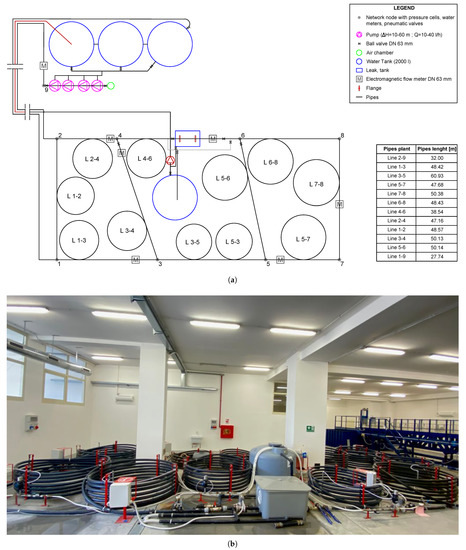