Comparative Use of Hydrologic Indicators to Determine the Effects of Flow Regimes on Water Quality in Three Channels across Southern Florida, USA
Previous Article in Journal

Integration of In Situ and Remote Sensing Measurements for the Management of Harmful Cyanobacteria Blooms. A Lesson from a Strategic Multiple-Uses Reservoir (Lake Occhito, South Italy)
Previous Article in Special Issue

Snow cover is a unique environmental medium in cold regions that can cause potential risks to the ecological environment, due to the release of pollutants that are stored in it. In this study, the Qixing River wetland, located in the Sanjiang Plain of China, was taken as the target research area. Heavy metals in snow cover, including Cu, Ni, Cr, Cd, Pb, and Zn were measured at 19 sampling sites. The results showed that the average concentrations of heavy metals were: Zn (103.46 ± 39.16) > Pb (13.08 ± 4.99) > Cr (11.97 ± 2.82) > Ni (9.55 ± 4.96) > Cu (6.19 ± 1.79) > Cd (0.55 ± 0.25) μg·L−1. Cr and Zn were between Class I and Class II in the “Environmental Quality Standards for Surface Water” of China (GB3838-2002). Pb in snow exceeded the upper limit of Class II, and was significantly higher than concentrations measured in water samples from the Qixing River wetland (p < 0.05), indicating that atmospheric deposition during winter was the major source of Pb. The water pollution index (WPI) indicated that 61.0% of samples could be considered of “clean” status, while the contribution of Zn, Pb, and Cr to WPI were 33.3%, 21.0%, and 19.3%, respectively. A preliminary evaluation of heavy metal inventory in snow cover showed that the residue level of Zn was the highest (2313.57 ± 1194.67 μg·m−2), while Cd was the lowest (13.91 ± 10.45 μg·m−2). The areas with high residues of heavy metals were all located near the buffer zone of the wetland (except for Zn), where snow depth tended to be greatest. Exposure analysis indicated that the risks to winter resident birds from snow ingestion was minimal, but it should be noted that the exposure risk was higher in birds with lower bodyweights. This study provides important information and scientific knowledge on the pollution characteristics and residue inventory of heavy metals in wetland ecosystems, while the results can also provide a monitoring method, reflecting atmospheric environmental quality at a local or regional scale. View Full-Text
Keywords: wetland; snow cover; heavy metals; residue inventory; risk assessment wetland; snow cover; heavy metals; residue inventory; risk assessment
►▼ Show Figures 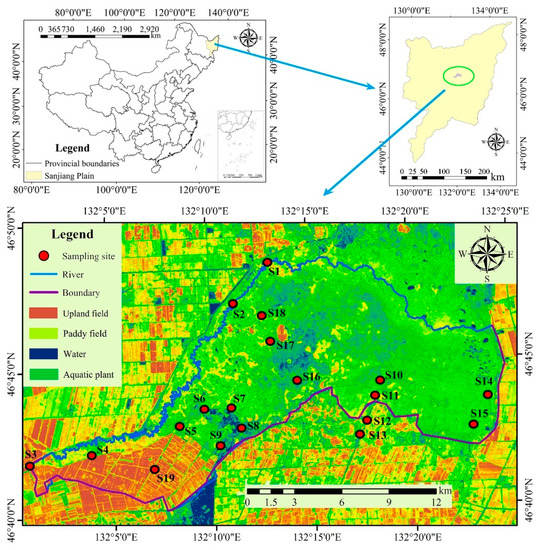