Application of the Kilimanjaro Concept in Reversing Seawater Intrusion and Securing Water Supply in Zanzibar, Tanzania
Previous Article in Journal

Density, temperature, salinity, and hydraulic head are physical scalars governing the dynamics of aquatic systems. In coastal aquifers, lakes, and oceans, salinity is measured with conductivity sensors, temperature is measured with thermistors, and density is calculated. However, in hypersaline brines, the salinity (and density) cannot be determined by conductivity measurements due to its high ionic strength. Here, we resolve density measurements using a hydrostatic densitometer as a function of an array of pressure sensors and hydrostatic relations. This system was tested in the laboratory and was applied in the Dead Sea and adjacent aquifer. In the field, we measured temporal variations of vertical profiles of density and temperature in two cases, where water density varied vertically from 1.0 × 103 kg·m−3 to 1.24 × 103 kg·m−3: (i) a borehole in the coastal aquifer, and (ii) an offshore buoy in a region with a diluted plume. The density profile in the borehole evolved with time, responding to the lowering of groundwater and lake levels; that in the lake demonstrated the dynamics of water-column stratification under the influence of freshwater discharge and atmospheric forcing. This method allowed, for the first time, continuous monitoring of density profiles in hypersaline bodies, and it captured the dynamics of density and temperature stratification. View Full-Text
Keywords: hydrostatic densitometer; density measurement; hypersaline brine; coastal aquifer; fresh–saline water interface; diluted plume hydrostatic densitometer; density measurement; hypersaline brine; coastal aquifer; fresh–saline water interface; diluted plume
►▼ Show Figures 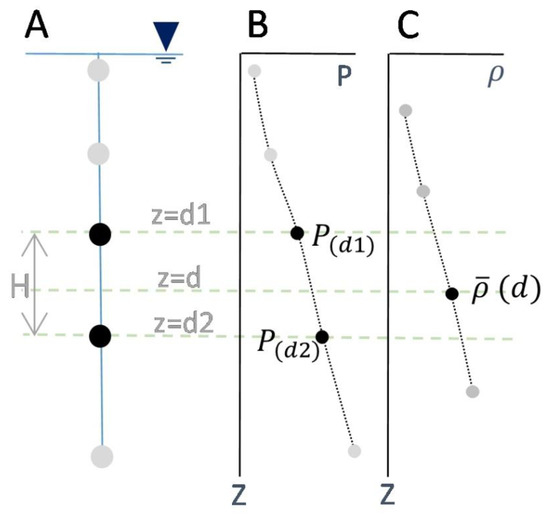