Developing the Food, Water, and Energy Nexus for Food and Energy Scenarios with the World Trade Model
Previous Article in Journal

Water Footprint and Virtual Water Trade of Maize in the Province of Buenos Aires, Argentina

Agriculture is the largest fresh water consuming sector, and maize is the most produced and consumed crop worldwide. The water footprint (WF) methodology quantifies and evaluates the water volumes consumed and polluted by a given crop, as well as its impacts. In this work, we quantified for the first time the green WF (soil water from precipitation that is evapotranspired) and the green virtual water exports of maize from Buenos Aires province, Argentina, during 2016–2017, due to the relevance of this region in the world maize trade. Furthermore, at local level, we quantified the green, blue (evapotranspired irrigation), and grey (volume of water needed to assimilate a pollution load) WF of maize in a pilot basin. The green WF of maize in the province of Buenos Aires ranged between 170 and 730 m3/ton, with the highest values in the south following a pattern of yields. The contribution of this province in terms of green virtual water to the international maize trade reached 2213 hm3/year, allowing some water-scarce nations to ensure water and water-dependent food security and avoid further environmental impacts related to water. At the Napaleofú basin scale, the total WF of rainfed maize was 358 m3/ton (89% green and 11% grey) and 388 m3/ton (58% green, 25% blue, and 17% grey) for the irrigated crop, showing that there is not only a green WF behind the exported maize, but also a Nitrogen-related grey WF. View Full-Text
Keywords: water footprint; virtual water trade; maize; Buenos Aires province; water-use sustainability; water quality; water savings water footprint; virtual water trade; maize; Buenos Aires province; water-use sustainability; water quality; water savings
►▼ Show Figures 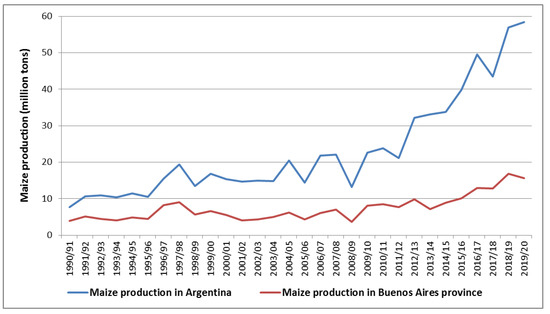