Due to rapid eutrophication, sustainable water quality management and supply are essential in drinking water sources and aquatic biota in large reservoirs. We evaluated the potentially crucial factors influencing the algal chlorophyll (CHL-a), nutrients, and the links between the rainfall and other vital elements in a large multipurpose reservoir (Yongdam Reservoir) during 2013–2019. We developed the empirical models on algal CHL-a, total phosphorus (TP), total nitrogen (TN), and TN:TP’s ambient ratios considering the maneuvering influence of Asian monsoons. The intensive rainfall during the monsoon months strongly impacted the nutrient regime and other vital factors. The seasonal patterns of algal CHL-a varied in response to the nutrient contents (TN, TP), suspended solids, and ambient N:P ratios along the longitudinal gradient. The conditional plot analysis, empirical modeling, and observations supported an overall P-limitation scenario, as was evident from the magnitude of N:P ratios (R2 = 0.36, F = 24.9, p < 0.001). Furthermore, the reservoir’s trophic status alluded to the larger particles and blue-green algae during the monsoon and postmonsoon months. The correlation analysis, Mann–Kendall trend test, and principal component analysis illustrated compelling links between CHL-a, TP, and rainfall regime. The outcomes suggested the reservoir was primarily controlled by phosphorus limitation, with an increasing CHL-a tendency along with nitrogen dilution. However, a slight decline in phosphorus was also detected. The Yongdam Reservoir is under the threat of recurrent eutrophication events that could jeopardize this vital drinking water facility due to increasing agricultural and anthropic activities. View Full-Text
Keywords: monsoon regime; trophic state indicators; eutrophication; drinking purpose reservoir; water quality; total phosphorus monsoon regime; trophic state indicators; eutrophication; drinking purpose reservoir; water quality; total phosphorus
►▼ Show Figures 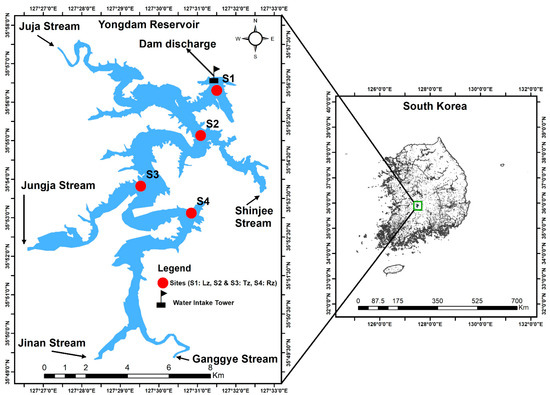