The basic principle of infilling missing data is based on the relationship between missing and observed variables and the specific value of the observed variable. Probabilistic estimation of missing data is made possible through constructing the multivariate probability model of missing and observed variables. Copulas offer flexibility to decompose the multivariate probability model by marginal distributions and the link between them.
Let L and Q denote the continuous random variables of suspended sediment load and streamflow discharge, respectively. FL(l) and FQ(q) are the corresponding cumulative distribution function (CDF) of L and Q, respectively. The Sklar theorem [54] states that if FL(l) and FQ(q) are continuous, then there is a unique copula such that the joint cumulative distribution function (JCDF) of L and Q can be written as where C(·) is the copula function. The corresponding joint probability density function (JPDF) of L and Q thus becomes where fL(l) and fQ(q) are the probability density functions (PDF) of L and Q, respectively; and c(·) is the copula density, which is obtained by where u and v denote two dependent CDFs.
The two-stage maximum likelihood method, called the method of inference for margins (IFM) proposed by Joe [55], is adopted in this study to estimate parameters of marginal distributions and copulas since less computational intensive. This method consists of separate estimations of the parameters of univariate marginal distributions, followed by an estimation of copula parameters.
Three copulas commonly used in constructing bivariate model of sediment and discharge, including Clayton, Frank, and Gumbel-Hougaard, are employed in this study [18,48,49,50,51,52,53]. These three copulas and the corresponding copula densities are summarized in Table 1 [56]. The Kolmogorov-Smirnov (K-S) test and the Cramér-von Mises (C-M) test are conducted for accessing goodness-of-fit of the marginal distributions and copulas, respectively [57]. The best-fitted marginal distributions and copula are determined by the minimum AIC (Akaike Information Criterion).

4.1. The Best-Fitted Marginal Distributions and Copulas

Four different methods based on the derived copula-based CPDF and CCDF associated with sediment rating curve are used to estimate the suspended sediment loads given the observed discharge for the period of 2001–2019 in this study. The estimations of these methods are compared with recorded data, shown in Figure 4, and evaluated in terms of root mean square error (RMSE), mean absolute percentage error (MAPE), Nash-Sutcliffe efficiency (NSE) [59], and modified Nash-Sutcliffe efficiency (MNSE) [60], which are defined below, respectively. where n denotes the number of data; and denote the ith observed and estimated sediment data, respectively; and denotes the mean observed sediment.
The model with smaller RMSE and MAPE and close-to-1 NSE and MNSE denotes that it has better capability to infill missing data and has fewer deviations from the observed data. The results of RMSE, MAPE, NSE, and MNSE of these five infilling methods for the calibration (1960–2000) and validation (2001–2019) periods are reported in Table 4. The results indicate that sediment rating curve has best performance in RMSE and NSE. On the other hand, copula-based models (Methods 1–4) generally outperform in MAPE and MNSE and Method 1 (infilling missing value by mode) is the best model. Sediment rating curve is obtained by the least squares regression with minimized least squared deviations from the recorded data. It thus leads to better performance in criteria with the square term such as RMSE and NSE. Conditional distribution-based infilling methods, on the other hand, outperform in the other criteria.

Different evaluations on these sediment estimations are explored in this section. The estimated sediment of the periods of 1960–2000 (calibration), 2001–2019 (validation), and 1960–2019 are categorized as low, moderate, and high flows with 30, 40 and 30% of data in each flow state. Evaluations in terms of RMSE, MAPE, NSE, and MNSE of these sediment estimations for various periods are summarized in Table 5. Similar performances of these estimation methods are observed for various periods. Sediment rating curve loses its dominance in all indices for the low- and moderate-flow states. In contrast, Method 4 (median of 10,000 sediment estimations based on CCDF) outperforms other methods in several indices for these two flow states. However, sediment rating curve is the best model in RMSE and NSE and Method 1 outperforms in MAPE and MNSE of high-flow state for various periods.
Different performance evaluations between Table 4 and Table 5 are attributed to different infilling schemes used in various methods. The worse performances of sediment rating curve in low- and moderate-flow states are caused by its overestimations of sediment. The overestimations in low- and moderate-flow states do not produce greater squared deviations from the recorded data due to smaller sediment loads in low- and moderate-flow states. Fewer deviations in high-flow states lead to the sediment rating curve with better performance in RMSE and NSE of high-flow states for various periods (Table 5).
Methods 1 to 4 depend on the derived conditional distributions to estimate the sediments in all flow states. No clear overestimations for these conditional distribution-based methods are observed in low- and moderate-flow states (Figure 3) and induce better performance for all indices. However, less squared deviations for the sediment rating curve observed in high-flow state lead to only Method 1 (infilling missing value by mode) outperforming in MAPE and MNSE.
Figure 5 illustrates the frequency histograms of observed sediment data and the estimations of various infilling methods for the period of 1960–2019. The results indicate that the sediment rating curve produces a histogram contradicting the histogram of the observed sediment data. This contradiction is induced by overestimations for smaller sediments, which are evidently observed for the low-flow state in Figure 4 and Table 5. In contrast, copula-based Methods 1–4 generate high frequencies in smaller sediments and low frequencies in greater sediments. However, similar histograms among Methods 2–4 are close to the histogram of recorded sediments when sediments exceed 1000 ton/day. Only Method 1 (infilling missing value by mode) reflects the similarity in all scopes of suspended sediment load. This similarity between histograms of recorded sediments and the estimated sediments by Method 1, especially when sediment <1000 ton/day, is attributed to the right-skewed CPDFs shown in Figure 3. Method 1 estimates sediments using the mode of the CPDFs, which is clustered in smaller sediments due to right-skewed CPDFs and leads to high frequencies in smaller sediments.
Shojaeezadeh et al. [9] and Guo et al. [50] indicated that greater discharges are associated with larger intervals of conditional marginal distribution of sediments. Further, the relationship between discharge and sediment is nonlinear and highly stochastic. That is, a similar discharge can yield hugely different sediments. These properties of probabilistic sediment estimations are in line with the results of copula-based CPDFs shown in Figure 3. Bezak et al. [18] revealed that a copula-based estimation model yields the worst fit (greatest RMSE) when compared with the results of multiple regression and exponential models in some cases. However, a copula-based model produces the smallest residuals and better results in low-medium-flow events. These findings are consistent with the results of this study reported in Table 5.

Based on the daily paired sediment-discharge data at Jenshou station located in eastern Taiwan for the period of 1960–2019, probabilistic and four single-value estimation models of sediment data are constructed using copulas. The Gumbel-Hougaard copula (Figure 2c) is used to model the joint probability distribution of discharge and sediment data with best-fitted lognormal distributions (Figure 2a,b) as the marginal distributions.
The copula-based CPDF (Figure 3) and CCDF of sediments given various observed discharges provide probabilistic properties of estimated sediments such as the highly likely range of estimations, probabilities of sediments greater than or less than certain values, and various quantiles of specific probabilities. The derived CPDFs at Jenshou station shift toward the right and become flatter with increasing discharge. This phenomenon implies that the estimated suspended sediment load is distributed in a very large range for a greater discharge. That is, greater uncertainties exist in an estimation of suspended sediment load for the condition of large discharge.
The results of single-value sediment estimations for various infilling methods indicate that no single method outperforms in all evaluation criteria. The sediment rating curve has the best performance in RMSE and NSE, while copula-based methods generally outperform in MAPE and MNSE and Method 1 (infilling missing value by mode) is the best model among these copula-based methods. However, the frequency histogram of infilled sediments by the sediment rating curve contradicts the frequency histogram of recorded sediment. In contrast, the infilled sediments of the copula-based methods preserve a similar frequency histogram as noted in the recorded sediments. That is, high frequency is observed in small sediment and low frequency occurs in great sediment. Among these four methods, the frequency histogram of Method 1 is close to that of recorded sediment data.
Infilling missing sediments to have long and continuous data provides the necessary information for design and operation of water-resources engineering. Statistical methods alleviate the need for physical factors of watersheds and rivers to infill sediments. However, uncertainties existing in estimated sediments are attributed to the proposed statistical models using discharge only. Incorporating additional available parameters such as rainfall and maintaining models to increase the accuracy of infilled sediments remain as topics for further extending this study. Additionally, selecting the best estimation method among the conflicting indices using the multi-criteria evaluation approach is also important in model construction processes.

The suspended sediment load and streamflow data used in this study are provided from Water Resources Agency, Taiwan (https://www.wra.gov.tw (accessed on 18 June 2021)).

Financial support for this study was graciously provided by the Ministry of Science and Technology, Taiwan, ROC (MOST 108-2221-E-006-016). Valuable comments from three anonymous referees for improving presentation are greatly appreciated. 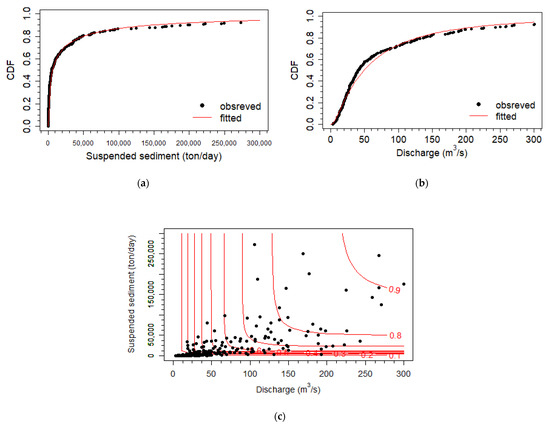 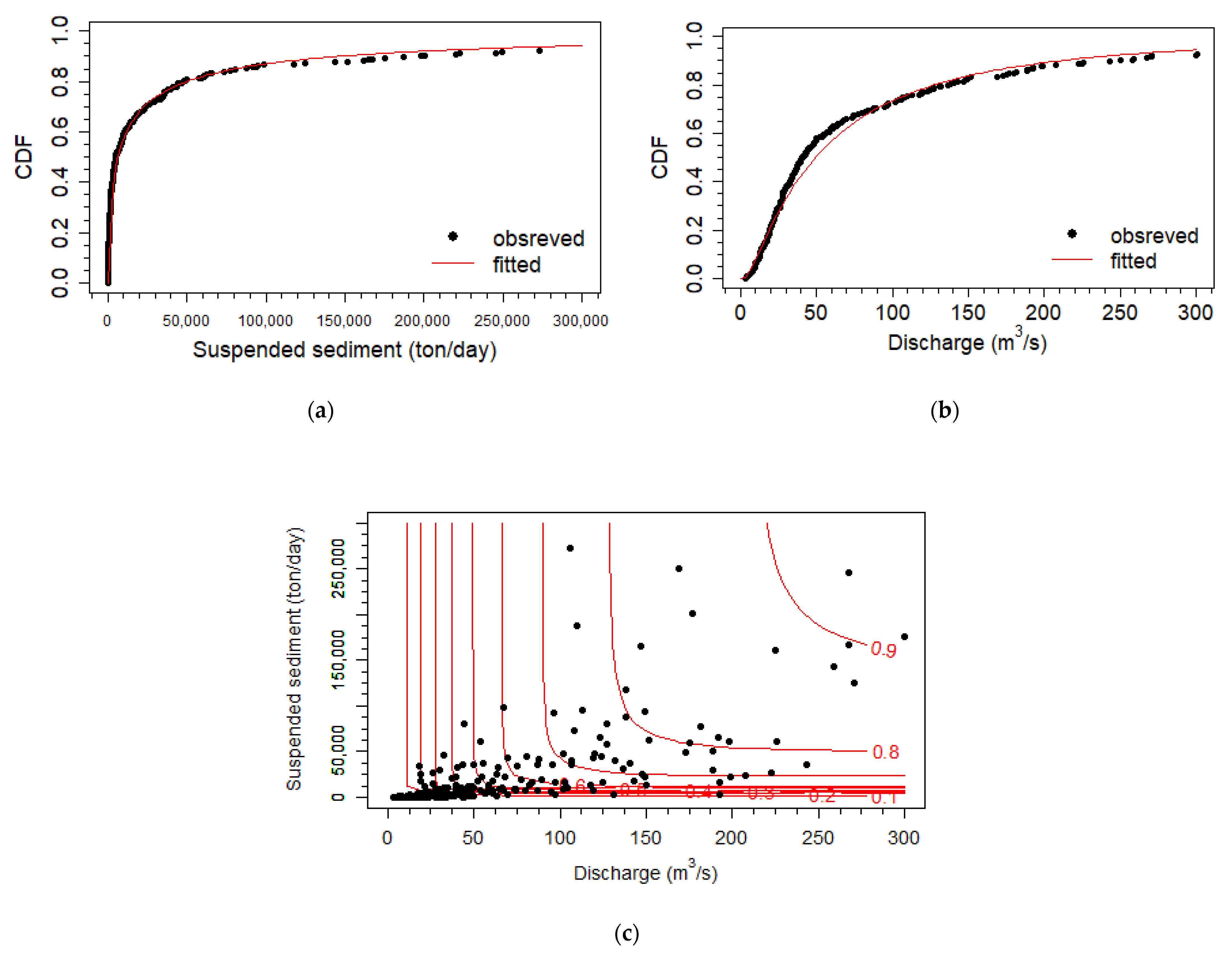 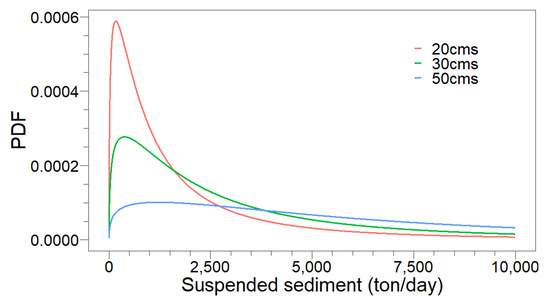 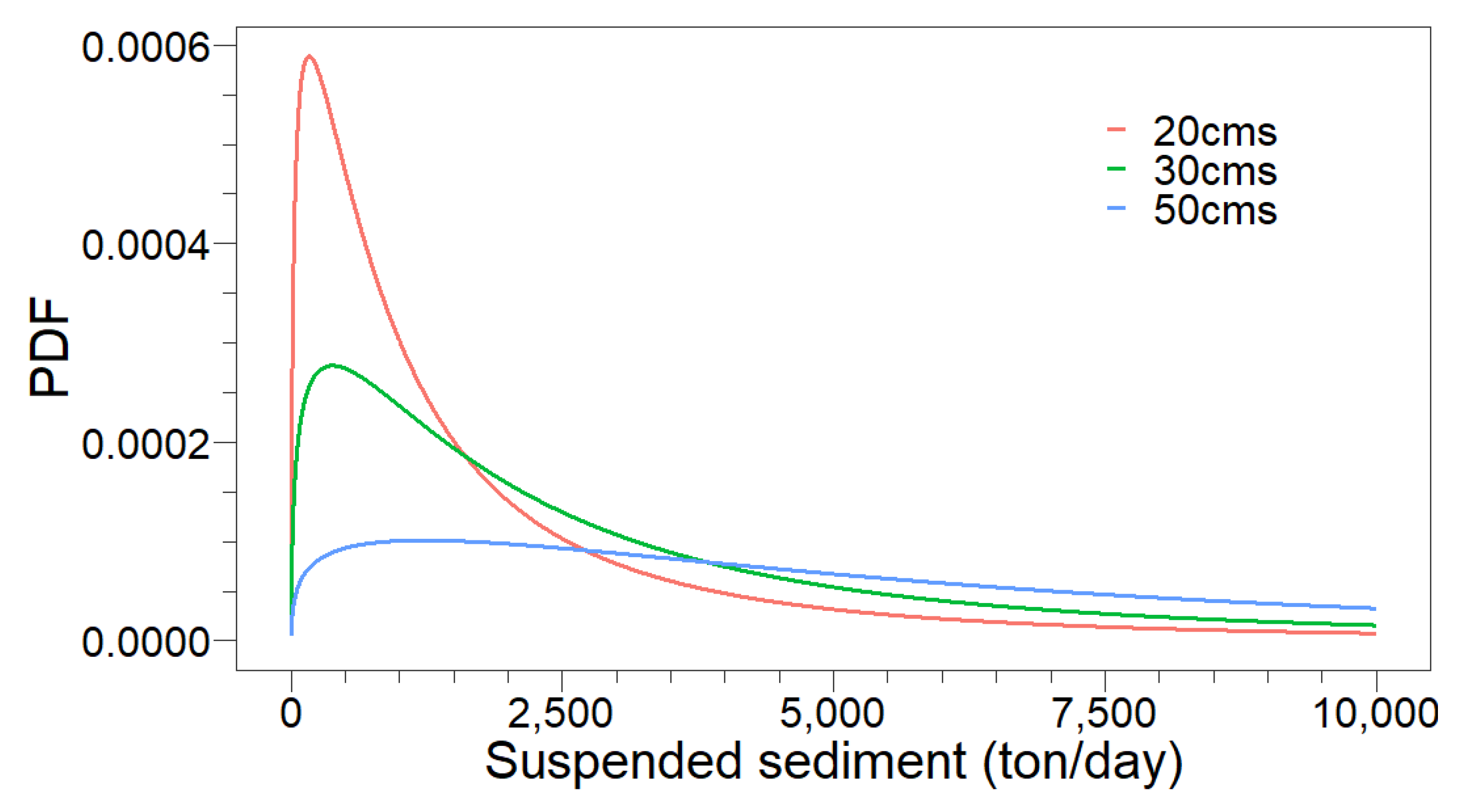