A Comparative Study of the Effects of the 1872 Storm and Coastal Flood Risk Management in Denmark, Germany, and Sweden

Debris flows tend to erode sediment from or deposit sediment on the bed, which changes their volume and, thus, in turn, affects their rheological properties. However, previous modeling studies on debris flows mostly ignore sediment erosion/deposition. Here, three models are presented: a debris model without bed deformation, which is similar to traditional models in that it does not consider sediment erosion/deposition but uses the Herschel–Bulkley formulation to describe the non-Newtonian nature; a debris model with bed deformation, which is better improved than the traditional model in that it considers sediment erosion/deposition; and a turbidity current model, which is further simplified from the debris model with bed deformation by ignoring the non-Newtonian nature. These models, formulated in the same modeling framework, are solved by a shock-capturing finite volume method. These models were firstly validated against three laboratory experiments, which indicated that the debris models with and without bed deformation with reasonably well-specified parameters can give satisfactory agreements with the measurements, whereas the turbidity current model overestimated the experimental result due to its lack of yield stress and dynamic viscosity. Moreover, a hypothetical field application was used to explain the difference between a turbidity current and debris flows with and without bed deformation. It was shown that debris flows and turbidity currents are capable of impacting the bed significantly. However, turbidity currents have thinner tails, less shear stress, and form horizontal deposits on the bed, while debris flows have a thicker tail, high shear stress, and form vertical deposits on the bed. Finally, sensitivity analyses were carried out to study the impact of sediment size, bed slope, concentration, and porosity on the deformation of the bed after debris flow where they all showed a positive correlation. View Full-Text
Keywords: subaerial and subaqueous muddy debris flow; erodible and non-erodible bed; numerical modeling; erosion; and deposition; bed deformation subaerial and subaqueous muddy debris flow; erodible and non-erodible bed; numerical modeling; erosion; and deposition; bed deformation
►▼ Show Figures 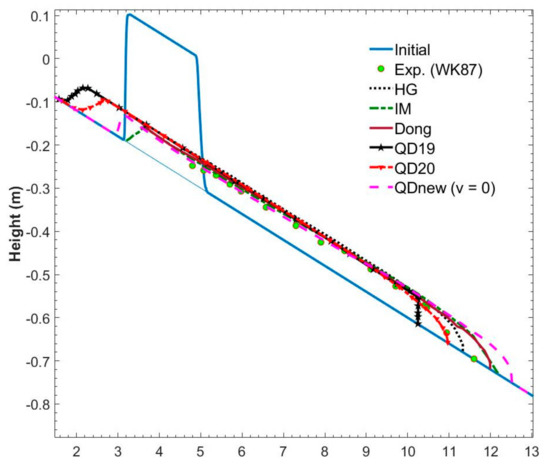