Arsenic in Petroleum-Contaminated Groundwater near Bemidji, Minnesota Is Predicted to Persist for Centuries

We used a reactive transport model to investigate the cycling of geogenic arsenic (As) in a petroleum-contaminated aquifer. We simulated As mobilization and sequestration using surface complexation reactions with Fe(OH)3 during petroleum biodegradation coupled with Fe-reduction. Model results predict that dissolved As in the plume will exceed the U.S. and EU 10 µg/L drinking water standard for ~400 years. Non-volatile dissolved organic carbon (NVDOC) in the model promotes As mobilization by exerting oxygen demand, which maintains anoxic conditions in the aquifer. After NVDOC degrades, As re-associates with Fe(OH)3 as oxygenated conditions are re-established. Over the 400-year simulation, As transport resembles a “roll front” in which: (1) arsenic sorbed to Fe(OH)3 is released during Fe-reduction coupled to petroleum biodegradation; (2) dissolved As resorbs to Fe(OH)3 at the plume’s leading edge; and (3) over time, the plume expands, and resorbed As is re-released into groundwater. This “roll front” behavior underscores the transience of sorption as an As attenuation mechanism. Over the plume’s lifespan, simulations suggest that As will contaminate more groundwater than benzene from the oil spill. At its maximum, the model simulates that ~5.7× more groundwater will be contaminated by As than benzene, suggesting that As could pose a greater long-term water quality threat than benzene in this petroleum-contaminated aquifer. View Full-Text
Keywords: arsenic; surface complexation; oil; biodegradation; iron reduction; sorption; reactive transport modeling arsenic; surface complexation; oil; biodegradation; iron reduction; sorption; reactive transport modeling
►▼ Show Figures 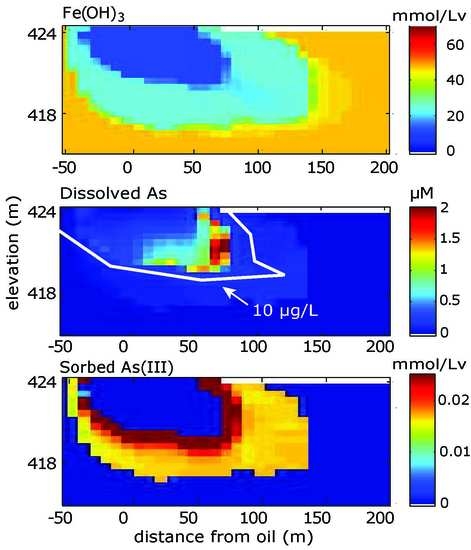