Physiological, Developmental, and Biomarker Responses of Zebrafish Embryos to Sub-Lethal Exposure of Bendiocarb

Recent studies suggest that photophysiological parameters for intact substrates with depth (e.g., periphytic biofilms, microphytobenthos) are overestimated by pulse-amplitude modulated (PAM) fluorometry. This overestimation results from depth-integration effects, following the activation of deeper photosynthesizing layers by an attenuated light signal. To mitigate this error, we propose a novel slide-based thin-film technique in which fluorescence is measured on a vertically representative subsample of the biofilm, spread evenly on a microscope slide. We compared bias and precision for photosynthetic parameters estimated through conventional PAM fluorometry on intact biofilms and through our novel slide-based technique, both theoretically and empirically. Numerical simulations confirmed the consistent overestimation of key parameters for intact biofilms, with relative errors up to 145%, compared to, at most, 52% on thin films. Paired empirical observations likewise demonstrated that estimates based on intact biofilms were consistently higher (up to 248%, ) than estimates from thin films. Numerical simulation suggested greater precision with the slide-based technique for homogeneous biofilms, but potentially less precision for heterogeneous biofilms with improper subsampling. Our empirical comparison, however, demonstrated some improvement in precision with the slide-based technique (e.g., the coefficient of variation for the maximum electron transport rate was reduced 30%, ). We recommend the use of the slide-based technique, particularly for biofilms that are thick or have small light attenuation coefficients. Care should be taken, however, to obtain vertically representative subsamples of the biofilm for measurement. View Full-Text
Keywords: periphyton; biofilm; pulse-amplitude modulated fluorometry; photophysiology; photosynthetic efficiency periphyton; biofilm; pulse-amplitude modulated fluorometry; photophysiology; photosynthetic efficiency
►▼ Show Figures 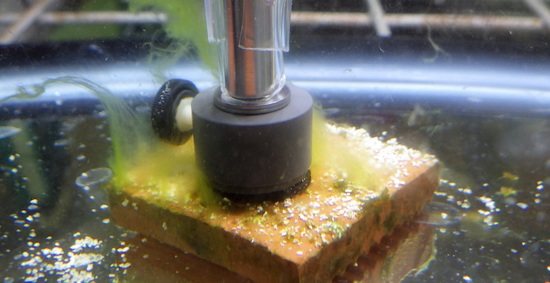