Assessing Reservoir Performance under Climate Change. When Is It Going to Be Too Late If Current Water Management Is Not Changed?
Next Article in Special Issue

The Impacts of Hydropower Dams in the Mekong River Basin: A Review
Previous Article in Journal

Identifying Indicators to Evaluate Community-Managed Freshwater Protected Areas in the Lower Mekong Basin: A Review of Marine and Freshwater Examples

A Meta-Analysis of Environmental Tradeoffs of Hydropower Dams in the Sekong, Sesan, and Srepok (3S) Rivers of the Lower Mekong Basin

In Mekong riparian countries, hydropower development provides energy, but also threatens biodiversity, ecosystems, food security, and an unparalleled freshwater fishery. The Sekong, Sesan, and Srepok Rivers (3S Basin) are major tributaries to the Lower Mekong River (LMB), making up 10% of the Mekong watershed but supporting nearly 40% of the fish species of the LMB. Forty-five dams have been built, are under construction, or are planned in the 3S Basin. We completed a meta-analysis of aquatic and riparian environmental losses from current, planned, and proposed hydropower dams in the 3S and LMB using 46 papers and reports from the past three decades. Proposed mainstem Stung Treng and Sambor dams were not included in our analysis because Cambodia recently announced a moratorium on mainstem Mekong River dams. More than 50% of studies evaluated hydrologic change from dam development, 33% quantified sediment alteration, and 30% estimated fish production changes. Freshwater fish diversity, non-fish species, primary production, trophic ecology, and nutrient loading objectives were less commonly studied. We visualized human and environmental tradeoffs of 3S dams from the reviewed papers. Overall, Lower Sesan 2, the proposed Sekong Dam, and planned Lower Srepok 3A and Lower Sesan 3 have considerable environmental impacts. Tradeoff analyses should include environmental objectives by representing organisms, habitats, and ecosystems to quantify environmental costs of dam development and maintain the biodiversity and extraordinary freshwater fishery of the LMB. View Full-Text
Keywords: hydropower planning; fish; hydrologic alteration; biodiversity; 3S Basin; connectivity hydropower planning; fish; hydrologic alteration; biodiversity; 3S Basin; connectivity
►▼ Show Figures 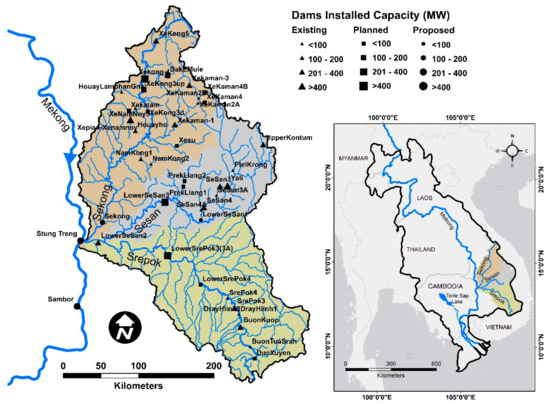