Projection of Droughts as Multivariate Phenomenon in the Rhine River

Drought is a complex phenomenon whose characterization is best achieved from a multivariate perspective. It is well known that it can generate adverse consequences in society. In this regard, drought duration, severity, and their interrelationship play a critical role. In a climate change scenario, drought characterization and the assessment of the changes in its pattern are essential for a proper quantification of water availability and managing strategies. The purpose of this study is to characterize hydrological droughts in the Rhine River in a multivariate perspective for the historical period and estimate the expected multivariate drought patterns for the next decades. Further, a comparison of bivariate drought patterns between historical and future projections is performed for different return periods. This will, first, indicate if changes can be expected and, second, what the magnitudes of these possible changes could be. Finally, the underlying uncertainty due to climate projections is estimated. Four Representative Concentration Pathways (RCP) are used along with five General Circulation Models (GCM). The HBV hydrological model is used to simulate discharge in both periods. Characterization of droughts is accomplished by the Standardized Runoff Index and the interdependence between drought severity and duration is modelled by a two-dimensional copula. Projections from different climate models show important differences in the estimation of the number of drought events for different return periods. This study reveals that duration and severity present a clear interrelationship, suggesting strongly the appropriateness of a bivariate model. Further, projections show that the bivariate interdependencies between drought duration and severity show clearly differences depending on GCMs and RCPs. Apart from the influence of GCMs and RCMs, it is found that return periods also play an important role in these relationships and uncertainties. Finally, important changes in the bivariate drought patterns between the historical period and future projections are estimated constituting important information for water management purposes. View Full-Text
Keywords: multivariate drought events; hydrological modelling; climate change; copulas multivariate drought events; hydrological modelling; climate change; copulas
►▼ Show Figures 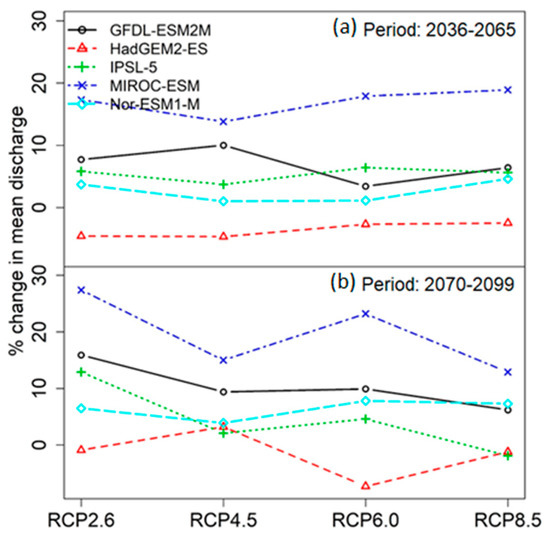