Comparison of the MUSLE Model and Two Years of Solid Transport Measurement, in the Bouregreg Basin, and Impact on the Sedimentation in the Sidi Mohamed Ben Abdellah Reservoir, Morocco

The evaluation and quantification of solids transport in Morocco often uses the Universal Soil Loss Model (USLE) and the revised version RUSLE, which presents a calibration difficulty. In this study, we apply the MUSLE model to predict solid transport, for the first time on a large river basin in the Kingdom, calibrated by two years of solid transport measurements on four main gauging stations at the entrance of the Sidi Mohamed Ben Abdellah dam. The application of the MUSLE on the basin demonstrated relatively small differences between the measured values and those expected for the calibrated version, these differences are, for the non-calibrated version, +5% and +102% for the years 2016/2017 and 2017/2018 respectively, and between −33% and +34% for the calibrated version. Besides, the measured and modeled volumes that do not exceed 1.78 × 106 m3/year remain well below the dam’s siltation rate of 9.49 × 106 m3/year, which means that only 18% of the dam’s sediment comes from upstream. This seems very low because it is calculated from only two years. The main hypothesis that we can formulate is that the sediments of the dam most probably comes from the erosion of its banks. View Full-Text
Keywords: modeling; MUSLE; erosion; solid transport; dam; Bouregreg; Morocco modeling; MUSLE; erosion; solid transport; dam; Bouregreg; Morocco
►▼ Show Figures 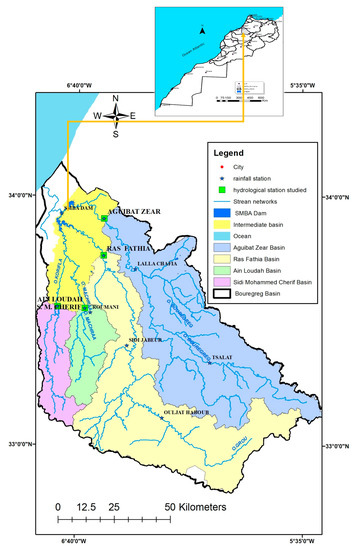 
Ezzaouini, Mohamed A., Gil Mahé, Ilias Kacimi, and Abdelaziz Zerouali. 2020. "Comparison of the MUSLE Model and Two Years of Solid Transport Measurement, in the Bouregreg Basin, and Impact on the Sedimentation in the Sidi Mohamed Ben Abdellah Reservoir, Morocco" Water 12, no. 7: 1882. https://doi.org/10.3390/w12071882