Given that the analysis of past monthly rainfall variability is highly relevant for the adequate management of water resources, the relationship between the climate-oceanographic indices, and the variability of monthly rainfall in Southwestern Colombia at different time scales was chosen as the research topic. It should also be noted that little-to-no research has been carried out on this topic before. For the purpose of conducting this research, we identified homogeneous rainfall regions while using Non-Linear Principal Component Analysis (NLPCA) and Self-Organizing Maps (SOM). The rainfall variability modes were obtained from the NLPCA, while their teleconnection in relation to the climate indices was obtained from Pearson’s Correlations and Wavelet Transform. The regionalization process clarified that Nariño has two regions: the Andean Region (AR) and the Pacific Region (PR). The NLPCA showed two modes for the AR, and one for the PR, with an explained variance of 75% and 48%, respectively. The correlation analyses between the first nonlinear components of AR and PR regarding climate indices showed AR high significant positive correlations with Southern Oscillation Index (SOI) index and negative correlations with El Niño/Southern Oscillation (ENSO) indices. PR showed positive ones with Niño1 + 2, and Niño3, and negative correlations with Niño3.4 and Niño4, although their synchronous relationships were not statistically significant. The Wavelet Coherence analysis showed that the variability of the AR rainfall was influenced principally by the Niño3.4 index on the 3–7-year inter-annual scale, while PR rainfall were influenced by the Niño3 index on the 1.5–3-year inter-annual scale. The El Niño (EN) events lead to a decrease and increase in the monthly rainfall on AR and PR, respectively, while, in the La Niña (LN) events, the opposite occurred. These results that are not documented in previous studies are useful for the forecasting of monthly rainfall and the planning of water resources in the area of study. View Full-Text
Keywords: Southwestern Colombia; nonlinear principal component analysis; monthly rainfall variability; climate-oceanographic indices; wavelet analysis Southwestern Colombia; nonlinear principal component analysis; monthly rainfall variability; climate-oceanographic indices; wavelet analysis
►▼ Show Figures 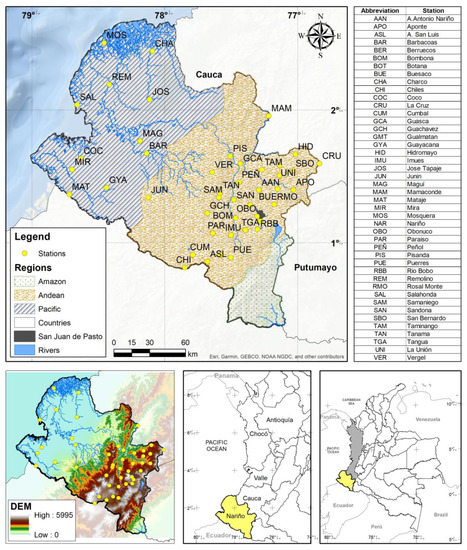