The Impact of Agricultural Production and Policy on Water Quality during the Dry Year 2018, a Case Study from Germany

The hot summer of 2018 posed many challenges with regard to water shortages and yield losses, especially for agricultural production. These agricultural impacts might further pose consequent threats for the environment. In this paper, we deduce the impact of droughts on agricultural land management and on water quality owing to nitrate pollution. Using national statistics, we calculate a Germany-wide soil surface nitrogen budget for 2018 and deduce the additional N surplus owing to the dry weather conditions. Using a model farm approach, we compare fertilization practices and legal restrictions for arable and pig breeding farms. The results show that, nationwide, at least 464 kt of nitrogen were not transferred to plant biomass in 2018, which equals an additional average nitrogen surplus of 30 kg/ha. The surplus would even have amounted to 43 kg/ha, if farmers had continued their fertilization practice from preceding years, but German farmers applied 161 kt less nitrogen in 2018 than in the year before, presumably as a result of the new implications of the Nitrates Directive, and, especially on grassland, owing to the drought. As nitrogen surplus is regarded as an “agri-drinking water indicator” (ADWI), an increase of the surplus entails water pollution with nitrates. The examples of the model farms show that fertilization regimes with high shares of organic fertilizers produce higher nitrogen surpluses. Owing to the elevated concentrations on residual nitrogen in soils, the fertilization needs of crops in spring 2019 were less pronounced than in preceding years. Thus, the quantity of the continuously produced manure in livestock farms puts additional pressure on existing storage capacities. This may particularly be the case in the hot-spot regions of animal breeding in the north-west of Germany, where manure production, biogas plants, and manure imports are accumulating. The paper concludes that water shortages under climate change not only impact agricultural production and yields, but also place further challenges and threats to nutrient management and the environment. The paper discusses preventive and emergency management options for agriculture to support farmers in extremely dry and hot conditions. View Full-Text
Keywords: climate change; nitrogen budget; nitrogen balance; water quality; land management; extreme weather events climate change; nitrogen budget; nitrogen balance; water quality; land management; extreme weather events
►▼ Show Figures 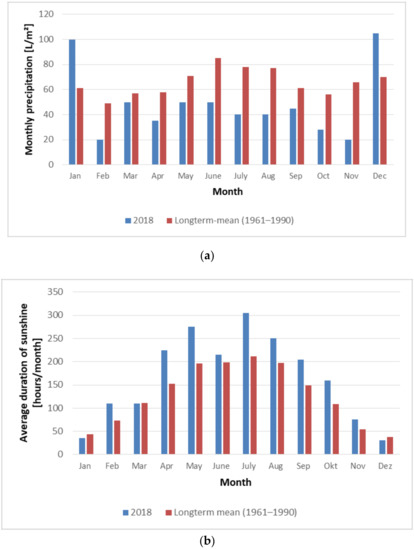