Hydrochemical Characteristic of Groundwater and Its Impact on Crop Yields in the Baojixia Irrigation Area, China
Previous Article in Journal

Hydrochemical Characteristics and Ion Sources of Precipitation in the Upper Reaches of the Shiyang River, China

The need for sustainable desalination arises from fast-occurring global warming and intensifying droughts due to increasing temperatures, particularly in the Middle East and North African (MENA) regions. Lack of water resources has meant that the countries in these regions have had to desalinate seawater through different sustainable technologies for food supplies and agricultural products. Greenhouses (GH) are used to protect crops from harsh climates, creating a controlled environment requiring less water. In order to have a sustainable resilient GH, a zero-liquid-discharge system (ZLD) was developed by using solar still (SS) desalination techniques, humidification-dehumidification (HDH), and rainwater harvesting. An experiment was designed and carried out by designing and manufacturing a wick type solar still, together with an HDH system, implemented into a GH. Using a pyrometer, the solar intensity was recorded, while the microclimate conditions (temperature and relative humidity) of the GH were also monitored. The GH model was tested in the UK and was shown to be a successful standalone model, providing its water requirements. In the UK, for one solar still with a surface area of 0.72 m2, maximum amount of 58 mL of distilled water was achieved per day. In Egypt, a maximum amount of 1090 mL water was collected per day, from each solar still. This difference is mainly due to the differences in the solar radiation intensity and duration in addition to the temperature variance. While dehumidification generated 7 L of distilled water, rainwater harvesting was added as another solution to the greenhouse in the UK, harvested a maximum of 7 L per day from one side (half the area of the greenhouse roof). This helped to compensate for the less distilled water from the solar stills. The results for the developed greenhouses showed how GHs in countries with different weather conditions could be standalone systems for their agricultural water requirement. View Full-Text
Keywords: desalination; solar still; humidification-dehumidification; zero liquid discharge; sustainability; agriculture GH desalination; solar still; humidification-dehumidification; zero liquid discharge; sustainability; agriculture GH
►▼ Show Figures 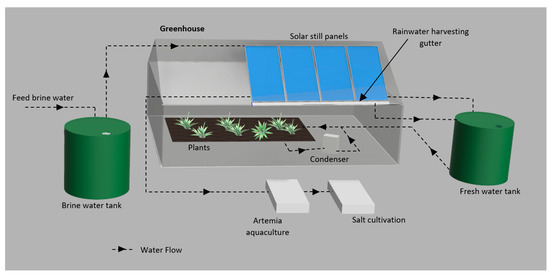