Diatoms are useful ecological and paleolimnological indicators routinely used to reconstruct past conditions and monitor environmental change. Despite this, diatom assemblages from lake sediment cores are often difficult to interpret due to a limited knowledge of the ecology of some species, some of which may originate from the adjacent limno-terrestrial landscape. Here, we compare diatom assemblages from two recently published Antarctic lake sediment cores collected from the northeast and southwest sides of Vega Island, Antarctic Peninsula. We further compare the sediment core assemblages with adjacent modern communities inhabiting four different limno-terrestrial habitat types to gauge the importance of landscape connectivity in determining paleo-assemblage structure. We found that diatom assemblage composition was significantly different between the two cores, and our survey of modern habitats further revealed habitat type to be an important factor determining the composition of limno-terrestrial samples. Differences in modern habitats were driven primarily by Chamaepinnularia krookiformis in mosses, Nitzschia paleacea in ponds, and Fistulifera pelliculosa in streams. When modern communities were compared with paleo-assemblages through ordination, the cored lake from the northeast side, which exhibited greater hydrological connectivity with its surroundings, clustered more closely with the adjacent modern samples. Meanwhile, the cored lake from the southwest side, which was more hydrologically isolated, formed a distinct cluster separate from the others. Overall, species richness and diversity were greater on the southwest side of the island than the northeast, and the known distributions of diatom taxa supported the notion that Vega Island was a transitional zone between the Maritime and Continental Antarctic bioregions. These results collectively suggested that while environmental and spatial controls may be influential in determining diatom community composition, the unique hydrogeological setting of individual waterbodies was an important consideration for determining the assemblage structure of lake cores. This paper furthermore expanded ongoing research of diatom diversity and distributions on maritime Antarctic islands, which will improve diatom-based interpretations for regional ecological monitoring and paleolimnology in the future. View Full-Text
Keywords: limnology; biogeography; streams; mosses; community ecology; Maritime Antarctic Region; Bacillariophyceae; polar biology; sediment core; littoral zone limnology; biogeography; streams; mosses; community ecology; Maritime Antarctic Region; Bacillariophyceae; polar biology; sediment core; littoral zone
►▼ Show Figures 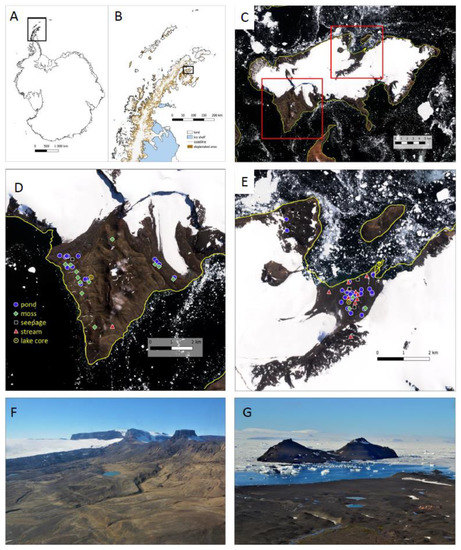