The Evolution and Sources of Major Ions in Hot Springs in the Triassic Carbonates of Chongqing, China
Next Article in Special Issue

The Selection of Rain Gauges and Rainfall Parameters in Estimating Intensity-Duration Thresholds for Landslide Occurrence: Case Study from Wayanad (India)

Rainfall-induced landslides are among the most devastating natural disasters in hilly terrains and the reduction of the related risk has become paramount for public authorities. Between the several possible approaches, one of the most used is the development of early warning systems, so as the population can be rapidly warned, and the loss related to landslide can be reduced. Early warning systems which can forecast such disasters must hence be developed for zones which are susceptible to landslides, and have to be based on reliable scientific bases such as the SIGMA (sistema integrato gestione monitoraggio allerta—integrated system for management, monitoring and alerting) model, which is used in the regional landslide warning system developed for Emilia Romagna in Italy. The model uses statistical distribution of cumulative rainfall values as input and rainfall thresholds are defined as multiples of standard deviation. In this paper, the SIGMA model has been applied to the Kalimpong town in the Darjeeling Himalayas, which is among the regions most affected by landslides. The objectives of the study is twofold: (i) the definition of local rainfall thresholds for landslide occurrences in the Kalimpong region; (ii) testing the applicability of the SIGMA model in a physical setting completely different from one of the areas where it was first conceived and developed. To achieve these purposes, a calibration dataset of daily rainfall and landslides from 2010 to 2015 has been used; the results have then been validated using 2016 and 2017 data, which represent an independent dataset from the calibration one. The validation showed that the model correctly predicted all the reported landslide events in the region. Statistically, the SIGMA model for Kalimpong town is found to have 92% efficiency with a likelihood ratio of 11.28. This performance was deemed satisfactory, thus SIGMA can be integrated with rainfall forecasting and can be used to develop a landslide early warning system. View Full-Text
Keywords: rainfall thresholds; early warning system; optimization; landslides rainfall thresholds; early warning system; optimization; landslides
►▼ Show Figures 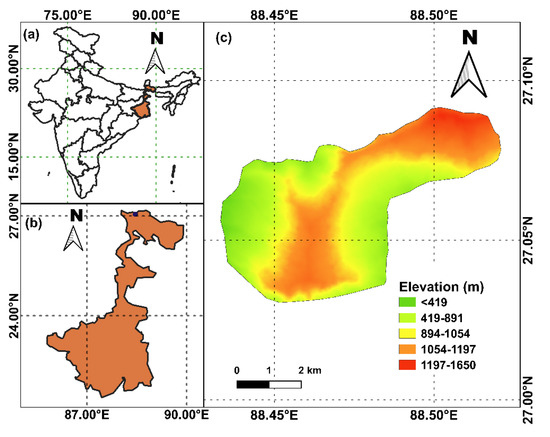