Trends of Runoff Variation and Effects of Main Causal Factors in Mun River, Thailand During 1980–2018
Previous Article in Journal

Precipitation Characteristic Analysis of the Zhoushan Archipelago: From the View of MSWEP and Rainfall Merging

Based on the long series of gauge rainfall data from 1979 to 2015, the performance of Multi-Source Weighted-Ensemble Precipitation (MSWEP) precipitation dataset in the Zhoushan Archipelago and its surrounding sea area in Southeast China was evaluated from a variety of perspectives, and then the Cressman scheme was used to merge MSWEP with surface gauge measurements. It was found that at the spatial scale of 0.1° × 0.1°, MSWEP correctly detected most of the daily rainfall events in the study area. The surface precipitation was generally underestimated, with a relative deviation no more than 10%, but there was a fairly high miss reporting on heavy precipitation. The performance of MSWEP is also obviously characterized with seasonal fluctuation. Compared with the gauge records interpolation results, the accuracy statistics of rainfall dataset generated by merging MSWEP with gauge observations is improved to a certain degree. Especially its comprehensive identification ability of the dry and wet state for daily precipitation has been obviously raised. In addition, the merged data has the mixed characteristics of rain gauge observations and MSWEP in spatial structure. This paper has deepened the understanding of the performance of MSWEP in islands and sea areas, and also strengthened the understanding of the marginal effect of merging gauge data with MSWEP, even other global precipitation datasets. View Full-Text
Keywords: MSWEP; rainfall merging; the Cressman scheme; the Zhoushan Archipelago MSWEP; rainfall merging; the Cressman scheme; the Zhoushan Archipelago
►▼ Show Figures 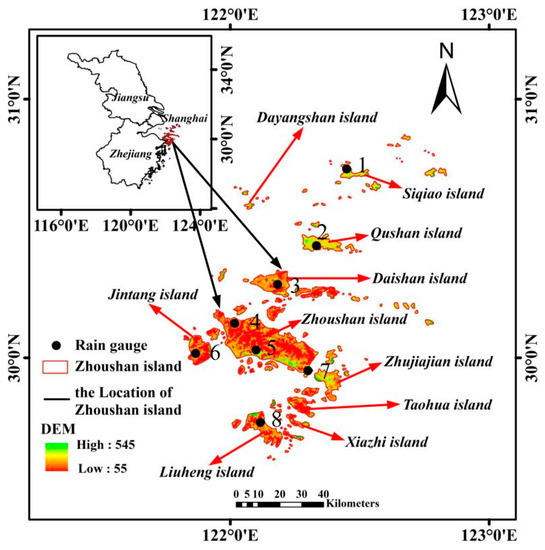