Xin’an River catchment is located in the east Asia humid monsoon area between 117°37′~118°56′ E, 29°25′~30°16′ N. The river originates from Wugujian Mountain at the junction of Xiuning County, Anhui province, and Jiangi province and routes into Qiandao Lake in Zhejiang province [26]. It borders Zhejiang province in the east and southeast and Jiangxi province in the west and southwest. The length of the main stream of the Xin’an River is about 359 km, and the study area is about 6219 km2 in this paper (Figure 1). The multi-year average precipitation in the basin is 1700.4 mm, which has a remarkably uneven seasonal distribution. The rainfall in the flood period (April to September) accounts for 70% of the total annual rainfall [27], which are prone to causing mountain flood disasters.
The sub-watershed division and river networks were carried out by the preprocessing module of the HEC-HMS model in the Xin’an River catchment, as shown in Figure 1. The observed streamflow data of Tunxi (2689 km2) and Linxi (589 km2) stations for flood events in the period 2007–2015 except the year 2014 was collected from Statistical Bulletin of Chinese Hydrology.

Wuding River catchment is located in the middle region of the Yellow River basin [28], between 108°18’~111°45’ E, 37°14’~39°35’ N, where it spreads a vast expanse of a loess plateau. The Wuding River belongs to the first-order branch of the Yellow River, which is the largest river in Yulin city of Shaanxi province. It originated from the northern area of Baiyu Mountain at the junction of Jingbian, Dingbian, and Wuqi counties in Shaanxi province and then flows into the main channel of the Yellow River through Hengshan, Yulin, Mizhi, and Suide counties in the province. The river has a total length of 491 km [29], and the study area of this paper is about 4000 km2 (also seen in the Figure 1). The river usually has a small flow, but high intensity rainfalls can also occur in a short period of time in the summer [30], which cause flash floods with high sediment concentration due to severe erosive sediment yield in the catchment.
With the same spatial analysis, we obtained the sub-watershed division and river networks in Wuding River catchment, as shown in the Figure 1. The observed streamflow data of the flood events at Qingyangcha (662 km2) and Suide (3893 km2) stations in the period 2006–2014 were also collected from Statistical Bulletin of Chinese Hydrology.

The TRMM (Tropical Rainfall Measuring Mission) and GPM (Global Precipitation Measurement) satellite rainfalls are used in this study. TRMM is the satellite project to undertake global rainfall monitoring [31], and GPM was built upon the TRMM project. They were jointly developed by NASA (US National Aeronautics and Space Administration) and Japan Aerospace Exploration Agency (JAXA) [32]. TRMM 3B42 V7, TRMM 3B42RT, and GPM IMERG “early run” and IMERG “late run” were downloaded from NASA’s Precipitation Measurement Missions website (https://pmm.nasa.gov/). Both TRMM 3B42 products have a 0.25° × 0.25° spatial resolution and 3-hour time step, while the GPM IMERG products have 0.1° × 0.1° spatial resolution and 0.5-hour time step.
The TRMM 3B42RT provides near-real-time precipitation data, and the data supplied by TRMM 3B42V7 is non-real time. The difference between them is that the TRMM 3B42RT near-real-time data was bias corrected using the CCA (Climatologic Calibration Analysis), whereas the TRMM 3B42V7 non-real time data was corrected by merging with gauge data from a few meteorological stations [33].
In addition, the system of GPM is run several times for each observation time, first giving a quick estimate (IMERG “early run”) and successively providing better estimates as more data arrive (IMERG “late run”). The final step uses monthly gauge data to create research-level products (IMERG “final run”). Flood forecasting requires real-time precipitation monitoring as much as possible. If we use the final run data, the longer lag time of the data is not beneficial to flood forecasting. IMERG “final run” is also difficult to meet the needs of flood forecasting in medium and small basins due to the quality of gauge data. For example, the gauge density is not enough or the gauge data are on monthly scale not hourly scale. Since the GPM satellites launched in 2014, GPM IMERG data were only adopted after 2014.
The observed hourly rainfall data used in this paper are also extracted from the Statistical Bulletin of Chinese Hydrology. There are respectively 39 rainfall stations and 25 rainfall stations distributed in the Xin’an River catchment and Wuding River catchment as shown in the Figure 1.

Correlation Coefficient (CC), Root Mean Squared Error (RMSE), Mean Error (ME), Mean Absolute Error (MAE), and Relative Bias (Bias) were used to quantitatively evaluate the accuracy of time series of the TRMM and GPM satellite precipitation products. The formulas of the indices are as follows: where is gauged rainfall at time i, mm; is the average of , mm; is satellite precipitation data at the same time, mm; is the average of , mm; and n is the total number of samples.
Correlation Coefficient (CC) reflects the linear correlation between satellite rainfall and gauged rainfall [34]. The larger the value is, the better the correlation between the satellite rainfall data and measured rainfall data is. Mean Error (ME) reflects the average difference between the satellite rainfall and measured rainfall, while Mean Absolute Error (MAE) represents average amplitude of the error. Although the Root Mean Squared Error (RMSE) also measures the size of the average error, it gives more weight to the larger error. Relative Bias (Bias) reflects the systematic bias of satellite rainfall data.
Three more indices, namely Probability of Detection (POD), False Alarm Ratio (FAR), and Critical Success Index (CSI), were selected to assess accuracy of spatial patterns of rainfall. They are calculated as follows: where H is the number of rainfall events observed and detected; M is the number of rainfall events observed but not detected; and F is the number of rainfall events detected but not observed. If the False Alarm Ratio (FAR) is smaller, the Probability of Detection (POD) and Critical Success Index (CSI) are higher and the satellite rainfall data have a better ability to estimate rainfall process.

The above evaluation indices are calculated for both the TRMM and GPM rainfall data at 3-hour time scales in the selected flood periods. Results as shown in the following Table 1 and Table 2, indicating that the accuracy of both the TRMM and GPM rainfalls is unsatisfactory at hourly time scale; thus, the direct use of these satellite data is difficult to meet the requirements of flood forecasting due to amplification effect of error in rainfall-runoff calculation. A method of merging satellite rainfall and gauged rainfall is developed to improve precision of rainfall monitoring and the potential hydrological applications in medium and small catchments. Firstly, the spatial resolution of GPM satellite rainfall and gauged rainfall are interpolated to 0.25° × 0.25°, which is same with the spatial resolution of TRMM satellite rainfall. Compared to the Quantile Mapping (QM), this method is simpler and more intuitive [35]. The merging steps are as follows:

4. Improvement of Flood Simulation by the Merged Rainfall

In this study, the HEC-HMS (The Hydrologic Engineering Center’s-Hydrologic Modeling System) model was used to simulate the floods processes both in the Xin’an River and Wuding River catchments. The rainfall-runoff model was developed by the Water Resources Research Center of the United States Army Engineering Corps in the 1990s [36]. For setting up the model, the SRTM 3 arc seconds DEM (Digital Elevation Model) is used by HEC-geoHMS to divide sub-catchments and relative parameters [37] for both the Xin’an River catchment and the Wuding River catchment. Hydrologic calculations of the model can be divided into four modules: runoff calculation, overland routing calculation, base flow calculation, and channel flow routing calculation [38]. For each module, the model provides several optional methods. The best suitable method can be selected, and the parameters will be validated according to the observed streamflow. In this study, SCS Curve Number Method, Synder Unit Hydrograph Method, Recession Method, and Muskingum Method were selected as the methods for each module of the model, which are used to calculate runoff and flow routing. The sensitive parameters include Lag Time, Muskingum K, and x. According to observed streamflow series, the model parameters were automatically optimized by the HEC-HMS model forced with gauged rainfall data. 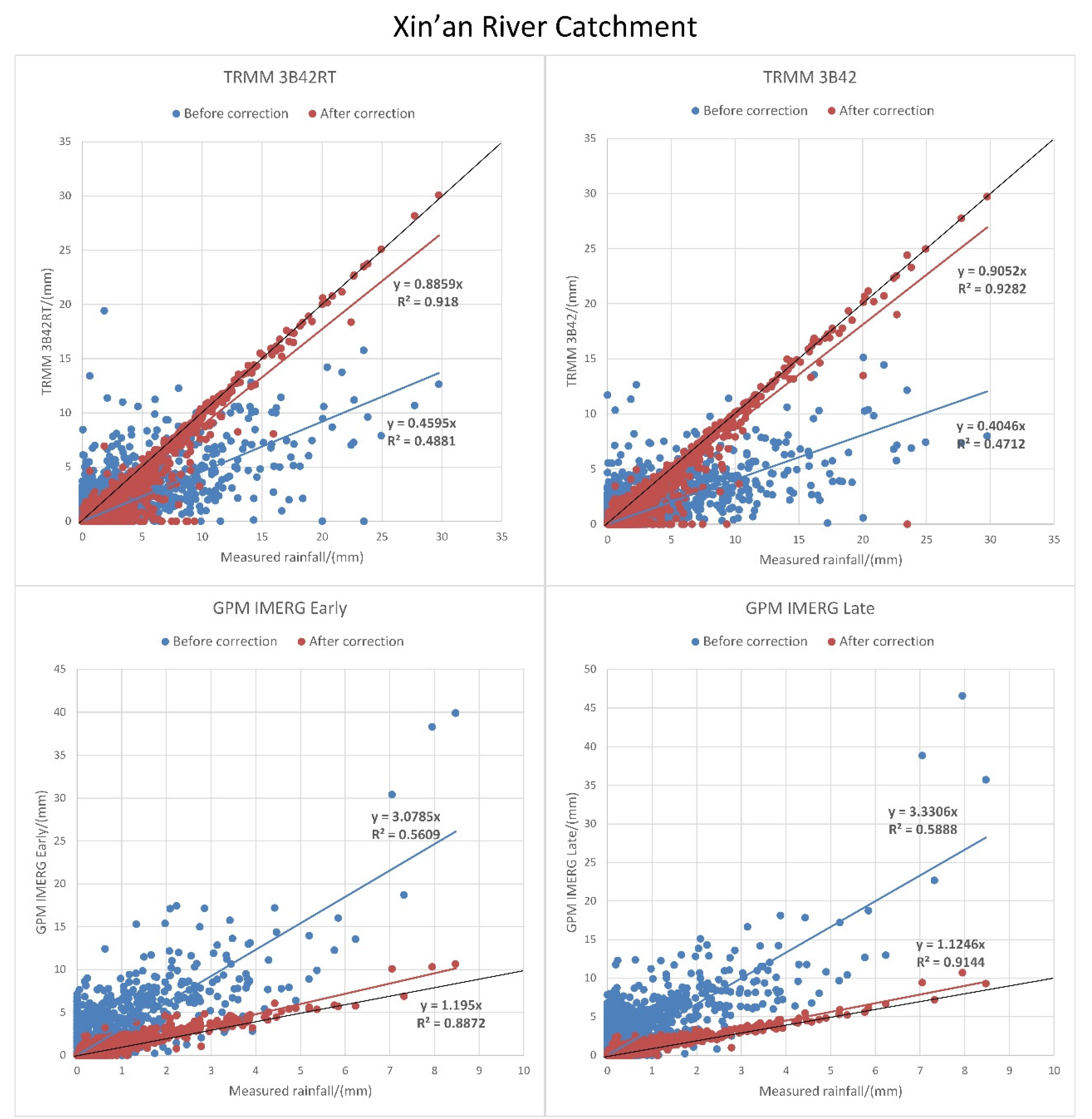 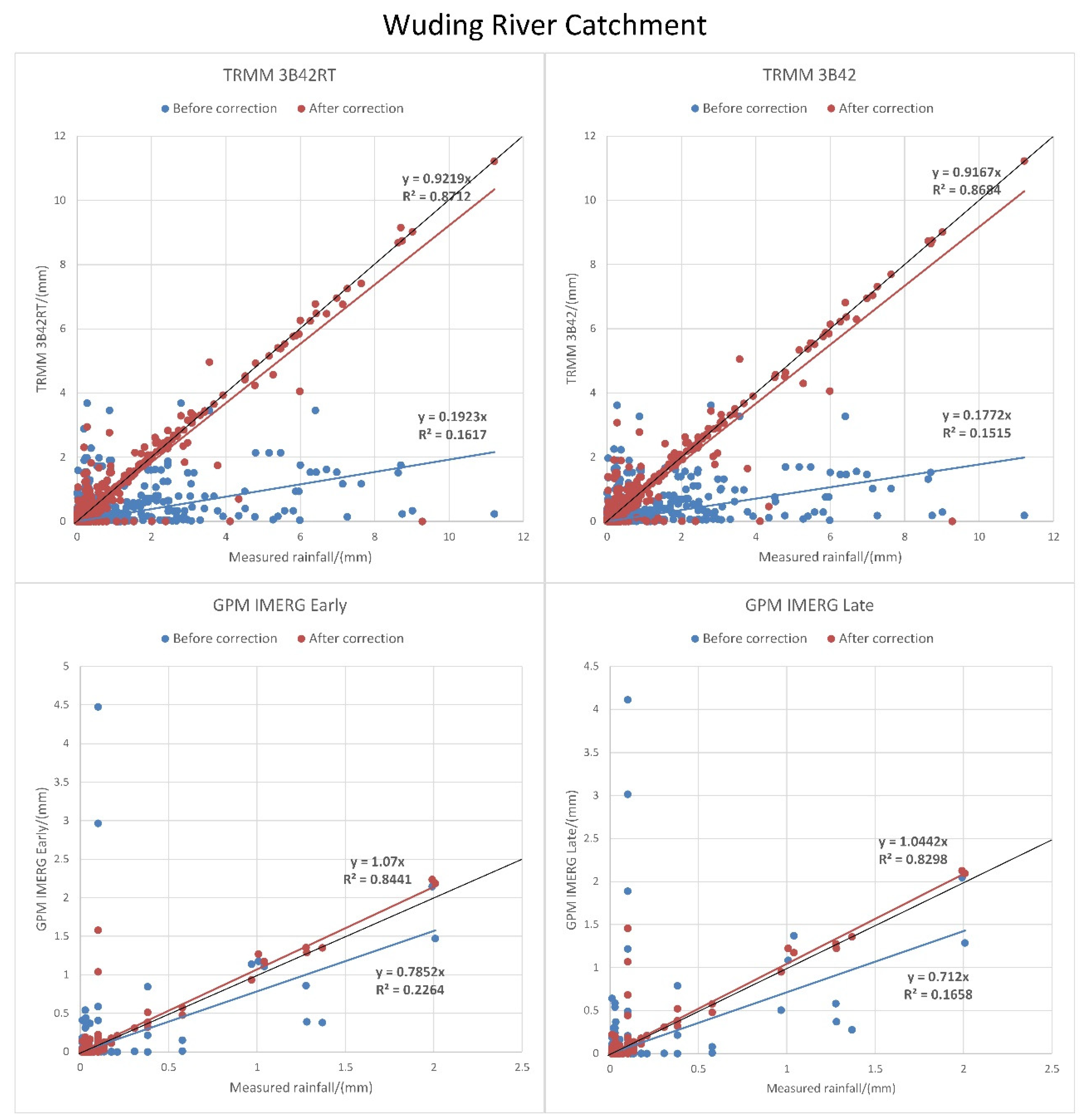 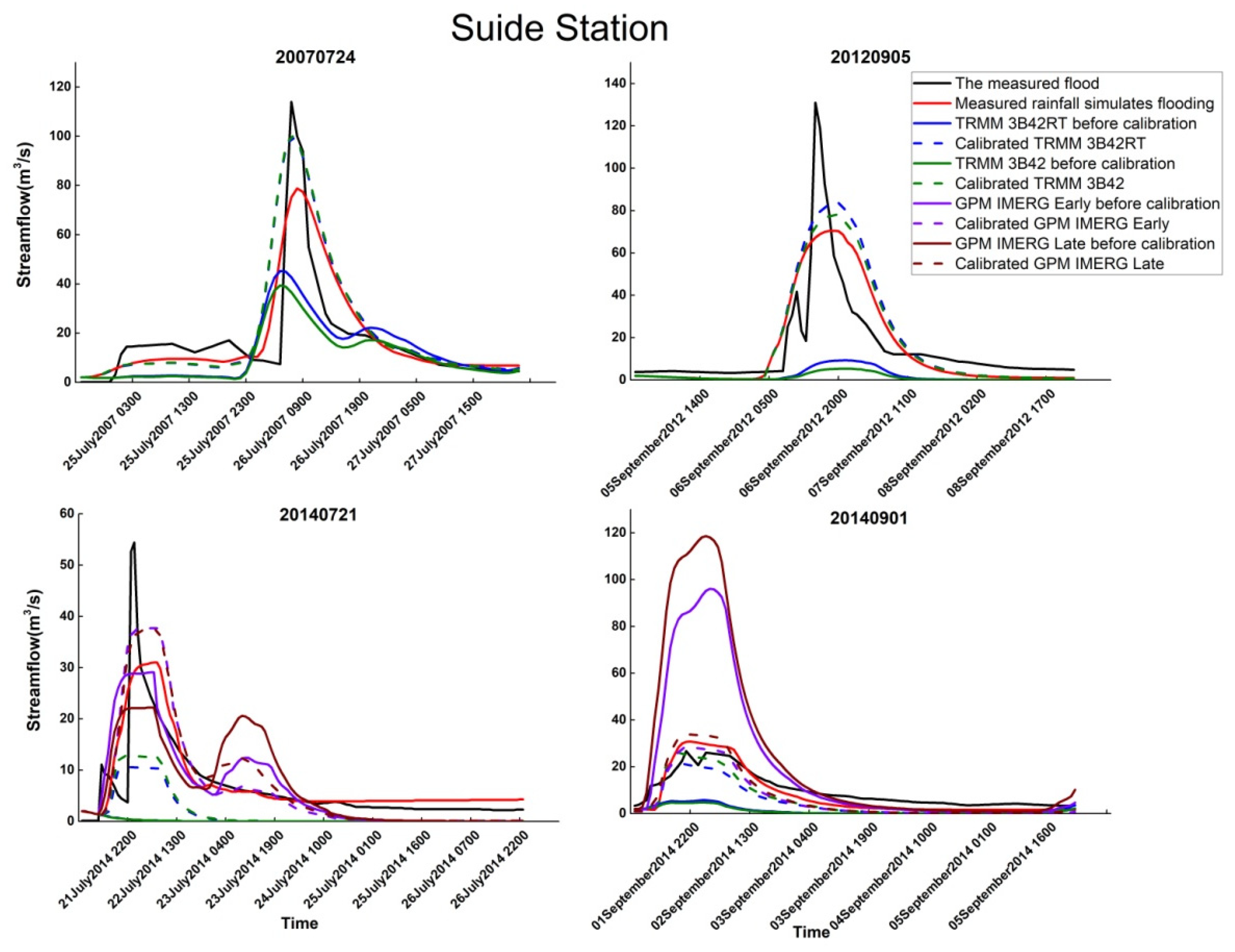