Arid and semi-arid ecosystems are characterized by patchy vegetation and variable resource availability. The interplant spaces of these ecosystems are very often covered by cyanobacteria-dominated biocrusts, which are the primary colonizers of terrestrial ecosystems and key in facilitating the succession of other biocrust organisms and plants. Cyanobacterial biocrusts regulate the horizontal and vertical fluxes of water, carbon and nutrients into and from the soil and play crucial hydrological, geomorphological and ecological roles in these ecosystems. In this paper, we analyze the influence of cyanobacterial biocrusts on water balance components (infiltration-runoff, evaporation, soil moisture and non-rainfall water inputs (NRWIs)) in representative semiarid ecosystems in southeastern Spain. The influence of cyanobacterial biocrusts, in two stages of their development, on runoff-infiltration was studied by rainfall simulation and in field plots under natural rainfall at different spatial scales. Results showed that cover, exopolysaccharide content, roughness, organic carbon, total nitrogen, available water holding capacity, aggregate stability, and other properties increased with the development of the cyanobacterial biocrust. Due to the effects on these soil properties, runoff generation was lower in well-developed than in incipient-cyanobacterial biocrusts under both simulated and natural rainfall and on different spatial scales. Runoff yield decreased at coarser spatial scales due to re-infiltration along the hillslope, thus decreasing hydrological connectivity. Soil moisture monitoring at 0.03 m depth revealed higher moisture content and slower soil water loss in plots covered by cyanobacterial biocrusts compared to bare soils. Non-rainfall water inputs were also higher under well-developed cyanobacterial biocrusts than in bare soils. Disturbance of cyanobacterial biocrusts seriously affected the water balance by increasing runoff, decreasing soil moisture and accelerating soil water loss, at the same time that led to a very significant increase in sediment yield. The recovery of biocrust cover after disturbance can be relatively fast, but its growth rate is strongly conditioned by microclimate. The results of this paper show the important influence of cyanobacterial biocrust in modulating the different processes supporting the capacity of these ecosystems to provide key services such as water regulation or erosion control, and also the important impacts of their anthropic disturbance. View Full-Text
Keywords: biological soil crust; arid; runoff; infiltration; soil water balance; dew biological soil crust; arid; runoff; infiltration; soil water balance; dew
►▼ Show Figures 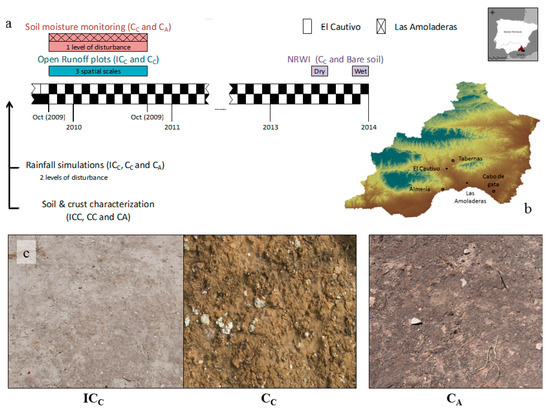