Coastal Flooding and Erosion under a Changing Climate: Implications at a Low-Lying Coast (Ebro Delta)

Storm surges are one of the main drivers for extreme flooding at the coastal areas. Such events can be characterized with the maximum level in an extreme storm surge event (surge peak), as well as the duration of the event. Surge projections come from a barotropic model for the 1950–2100 period, under a severe climate change scenario (RCP 8.5) at the northeastern Spanish coast. The relationship of extreme storm surges to three large-scale climate patterns was assessed: North Atlantic Oscillation (), East Atlantic Pattern (), and Scandinavian Pattern (). The statistical model was built using two different strategies. In Strategy #1, the joint probability density was characterized by a moving-average series of stationary Archimedean copula, whereas in Strategy #2, the joint probability density was characterized by a non-stationary probit copula. The parameters of the marginal distribution and the copula were defined with generalized additive models. The analysis showed that the mean values of surge peak and event duration were constant and were independent of the proposed climate patterns. However, the values of and influenced the threshold and the storminess of extreme events. According to Strategy #1, the variance of the surge peak and event duration increased with a fast shift of negative and a positive , respectively. Alternatively, Strategy #2 showed that the variance of the surge peak increased with a positive . Both strategies coincided in that the joint dependence of the maximum surge level and the duration of extreme surges ranged from low to medium degree. Its mean value was stationary, and its variability was linked to the geographical location. Finally, Strategy #2 helped determine that this dependence increased with negative . View Full-Text
Keywords: storm surge; Mediterranean; non-stationarity; copula; generalized additive model; probit storm surge; Mediterranean; non-stationarity; copula; generalized additive model; probit
►▼ Show Figures 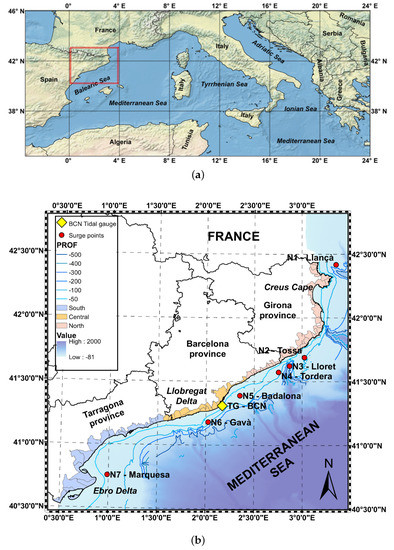