Headwaters’ Isotopic Signature as a Tracer of Stream Origins and Climatic Anomalies: Evidence from the Italian Alps in Summer 2018
Previous Article in Journal

Assessment of Anthropogenic Impact versus Climate Change on the Succession of the Diatom Community in Lugu Lake (Yunnan-Guizhou Plateau, China) Using the Sedimentary Record of Geochemical Elements

The lake ecosystems on the Yunnan-Guizhou Plateau in China have degraded in recent decades under the effects of anthropogenic activities and climate change. The human impact on the oligotrophic Lugu Lake aquatic ecosystem was evaluated using the sediment records of metals, nitrogen isotopes (δ15N) and magnetic susceptibility over the past 200 years. Three periods were identified based on the trace metal and δ15N records. During the first stage (1816–1976 AD), the concentrations of metals, δ15N and magnetic susceptibility were low with small variations. The anthropogenic contributions to the inputs were also small, except for Ni, reflecting minor human activities in the watershed, and no significant change was observed in the sediment record of the diatom assemblage. During the second stage (1976–2001 AD), the concentrations of Zn and δ15N increased, as well as the anthropogenic contribution of Zn. However, no significant change was detected in the anthropogenic sources of the other metals. These results reflect the low-level use of chemical fertilizers. The major shift in the sediment diatom assemblage during this stage was mainly attributed to regional climate change. During the third stage (2001–2010 AD), the concentrations of the sedimentary metals (Ni, Cr, Mn, Cu, Hg and Al) increased rapidly, with the exception of As and Zn, and a similar increasing trend was observed in the changes by anthropogenic sources of Ni, Cr, Mn and Cu. RDA (Redundancy Analysis) and variance partitioning analysis showed that the human impact and climate proxies independently explained 31.59% and 4.26% of the change of diatom community, respectively, and the interaction between climate change and human impact accounted for 18.61% of the change of diatom community. Tourism-dominated human activities, which were reflected in the metals profiles, facilitated the dominance of eutrophic species and reduced that of oligotrophic species. The development of tourism was likely the main driving force for the succession of diatom assemblages in the third stage. In summary, the anthropogenic input of trace metals in Lugu Lake is still at a low level. However, the significant growth trend in metals over the past decade is significantly related to the change in the lake ecosystem. Therefore, the effects of human activities, especially tourism, on the watershed should be controlled for the protection of the oligotrophic Lugu Lake. View Full-Text
Keywords: Lugu Lake; sediment record; anthropogenic impact; climate change; aquatic ecosystem Lugu Lake; sediment record; anthropogenic impact; climate change; aquatic ecosystem
►▼ Show Figures 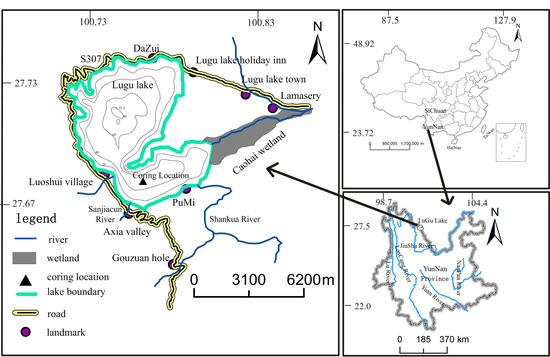