Evaluation of Marsh Terraces for Wetland Restoration: A Remote Sensing Approach
Next Article in Special Issue

A good understanding of the frequency and magnitude of lahars is essential for the assessment of torrential hazards in volcanic terrains. In many instances, however, data on past events is scarce or incomplete, such that the evaluation of possible future risks and/or the planning of adequate countermeasures can only be done with rather limited certainty. In this paper, we present a multiidisciplinary approach based on botanical field evidence and the numerical modelling of a post-eruptive lahar that occurred in 2012 on the northern slope of the Pico de Orizaba volcano, Mexico, with the aim of reconstructing the magnitude of the event. To this end, we used the debris-flow module of the rapid mass movement simulation tool RAMMS on a highly resolved digital terrain model obtained with an unmanned aerial vehicle. The modelling was calibrated with scars found in 19 Pinus hartwegii trees that served as paleo stage indicators (PSI) of lahar magnitude in a sector of Jamapa Gorge. Using this combined assessment and calibration of RAMMS, we obtain a peak discharge of 78 m3 s−1 for the 2012 lahar event which was likely triggered by torrential rainfall during hurricane “Ernesto”. Results also show that the deviation between the modelled lahar stage (depth) and the height of PSI in trees was up to ±0.43 m. We conclude that the combination of PSI and models can be successfully used on (subtropical) volcanoes to assess the frequency, and even more so to calibrate the magnitude of lahars. The added value of the approach is particularly obvious in catchments with very scarce or no hydrological data at all and could thus also be employed for the dating and modelling of older lahars. As such, the approach and the results obtained can be used directly to support disaster risk reduction strategies at Pico de Orizaba volcano, but also in other volcanic regions. View Full-Text
Keywords: lahar; Pico de Orizaba; paleostage indicators; tree-ring analysis; RAMMS program lahar; Pico de Orizaba; paleostage indicators; tree-ring analysis; RAMMS program
►▼ Show Figures 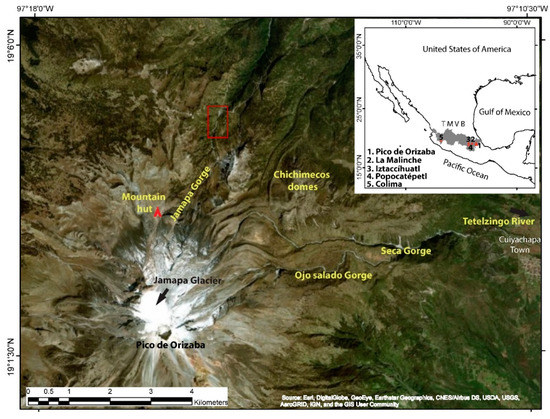