Evaluation in Carbon Dioxide Equivalent and CHG Emissions for Water and Energy Management in Water Users Associations. A Case Study in the Southeast of Spain
Previous Article in Special Issue

Hydrodynamic and Wave Responses During Storm Surges on the Southern Brazilian Coast: A Real-Time Forecast System

Hydrodynamic and Waves Response during Storm Surges on the Southern Brazilian Coast: A Hindcast Study

The Southern Brazilian Coast is highly susceptible to storm surges that often lead to coastal flooding and erosive processes, significantly impacting coastal communities. In addition, climate change is expected to result in expressive increases in wave heights due to more intense and frequent storms, which, in conjunction with sea-level rise (SLR), has the potential to exacerbate the impact of storm surges on coastal communities. The ability to predict and simulate such events provides a powerful tool for coastal risk reduction and adaptation. In this context, this study aims to investigate how accurately storm surge events can be simulated in the Southwest Atlantic Ocean employing the coupled ADCIRC+SWAN hydrodynamic and phase-averaged wave numerical modeling framework given the significant data scarcity constraints of the region. The model’s total water level (TWL) and significant wave height (Hs) outputs, driven by different sources of meteorological forcing, i.e., the Fifth Generation of ECMWF Atmospheric Reanalysis (ERA 5), the Climate Forecast System Version 2 (CFSv2), and the Global Forecast System (GFS), were validated for three recent storm events that affected the coast (2016, 2017, and 2019). In order to assess the potentially increasing storm surge impacts due to sea-level rise, a case study was implemented to locally evaluate the modeling approach using the most accurate model setup for two 2100 SLR projections (RCP 4.5 and 8.5). Despite a TWL underestimation in all sets of simulations, the CFSv2 model stood out as the most consistent meteorological forcing for the hindcasting of the storm surge and waves in the numerical model, with an RMSE range varying from 0.19 m to 0.37 m, and an RMSE of 0.56 m for Hs during the most significant event. ERA5 was highlighted as the second most accurate meteorological forcing, while adequately simulating the peak timings. The SLR study case demonstrated a possible increase of up to 82% in the TWL during the same event. Despite the limitations imposed by the lack of continuous and densely distributed observational data, as well as up to date topobathymetric datasets, the proposed framework was capable of expanding TWL and Hs information, previously available for a handful of gauge stations, to a spatially distributed and temporally unlimited scale. This more comprehensive understanding of such extreme events represents valuable knowledge for the potential implementation of more adequate coastal management and engineering practices for the Brazilian coastal zone, especially under changing climate conditions. View Full-Text
Keywords: numerical modeling; ADCIRC-SWAN; southwest Atlantic; sea-level rise; climate change numerical modeling; ADCIRC-SWAN; southwest Atlantic; sea-level rise; climate change
►▼ Show Figures 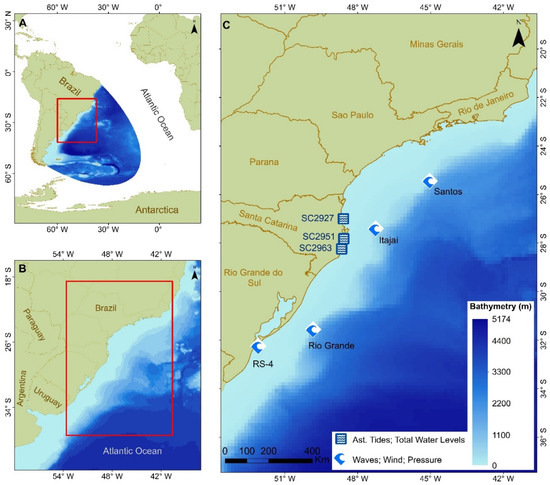