Urban flooding has become a significant issue due to the frequent occurrence of urban storms. More than 60% of the cities in China encountered flooding events in recent years [1]. Many studies were undertaken by researchers in the field of flood disasters [2,3,4,5]. Recently, new modeling methods were proposed in attempts at urban flood simulation [6,7,8]. Urban flood models are widely used as a reliable tool in flood management. High-accuracy flood simulations can effectively help managers to prevent and mitigate urban flood disasters. However, the simulation accuracy of urban flood models is easily affected by independent variables in the process of flood simulation [9], particularly terrain resolution, artificial land cover, and rainfall intensity. Hu et al. [10] previously analyzed 48 peer-reviewed journal articles published between 2015 and 2019 on the Web of Science™ database, studying the impact of rainfall input. Their findings were of great significance for the future development of urban flood models. Studies on the effect of terrain resolution and artificial land cover are also important for an improvement in simulation accuracy.
With regard to terrain resolution, previous studies mostly focused on mountainous and plain areas [11,12,13,14]. Recently, the effect of resolution on urban flood models attracted the attention of scholars. Xing et al. [15] recommended that simulations should be performed at resolutions higher than 5 m in hydrodynamic models. However, digital elevation model (DEM) data with a high resolution (finer than 5 m) and detailed information are often rare, unavailable, or expensive, especially for the remote cities of developing countries [16]. Other resolutions (30 m or lower) are more easily available; these models need to be properly evaluated. In order to understand the effect of input resolution on the simulation outcomes, Elaji and Ji [17] simulated urban runoff using different resolutions (3–30 m resolution DEMs with 6–30 m resolution images). Their results proved the good tolerance of their developed simulation approach for small variations in input parameters. However, a quantitative evaluation of this effect needs to be addressed in further work.
A thorough consideration of urban terrain, buildings, roads, water systems, pipe networks, and other factors allows accurately simulating the rainfall runoff process in urban areas [18]. Artificial land cover (e.g., roads and buildings) cannot be ignored due to its non-negligible effect on flooding [19,20]. Some scholars conducted relevant studies using hydrological or hydrodynamic models. Vojinovic et al. [21] explored the effect of different features such as roads and buildings on the simulation results in two-dimensional floodplains. As a function of the theory of early urban flood models, effect analyses of their results were limited. Building representations in different methods were also compared and discussed in urban flood models, such as building block (BB) and building resistance (BR) [22,23]. The BR method was deemed a good choice for urban flood simulations when detailed building geometry data were not available. The BB method was relatively easy to implement and could improve accuracy through the implementation of a relatively fine grid around buildings. The effect of roads was not considered, and the degree of effect on the simulation results was unclear in their urban flood model. Hence, there is a need to apply and evaluate different representation methods of buildings and roads, as well as provide suggestions with respect to appropriate methods in the modeling process.
This paper took the Jianye district, which has experienced extensive urbanization, as the study case; the results confirm the accuracy of the evaluation approach, suggesting its potential use for urban flood models in similar districts. The main aim of this paper was to explore and evaluate model accuracy as a function of terrain resolution and artificial land cover in the study area by establishing several modeling scenarios with varying DEM resolutions (17, 30, and 70 m), land-cover representation methods (BB, road drainage (RD), and BB + RD), and rainfall intensities (2 and 10 year return periods). Furthermore, real flood events were initially simulated as a model verification case, and hypothetic scenarios were simulated and compared. Two indicators were developed to evaluate the accuracy difference: relative depth accuracy (RDA) and relative area accuracy (RAA).

Jianye district, which has experienced extensive urbanization, is one of the major districts of Nanjing, located in the southwest (Figure 1). Nanjing belongs to the subtropical monsoon climate with abundant rainfall (annual precipitation, 1200 mm). According to rainfall characteristics in Nanjing from 1951 to 2017, the Keifer and Chu rainfall pattern method is recommended [24]. This paper used two return periods (2 and 10 years) with the Urban Drainage Design Specification and Urban Flood Control Design Specification, published by the Ministry of Construction and Ministry of Water Resources in China. Rainfall intensities and total rainfall are shown in Figure 2.
Jianye district is relatively complete and independent, including roads, buildings, green spaces, water systems, and other land cover. It features a flat terrain with a ground elevation of 5.5–7.5 m, as shown in Figure 1. In this paper, three terrain resolutions (17, 35, and 70 m) were resampled on the basis of the ASTER GDEM data collected on the Geospatial Data Cloud platform.

In this paper, the urban flood model was established by coupling a one-dimensional pipe network model and a two-dimensional surface flow model with the mature MIKE 21 model [25]. The sewer flow in the pipe network was considered as one-dimensional flow, solved by using the Saint-Venant equations. In a one-dimensional flow regime, it is assumed that the water body is incompressible and homogeneous. The bottom slope of the open channel is small, and the water surface is parallel to the bottom slope (the length was much longer than the inundation depth in this paper: L/H > 100). Saint-Venant equations were discretized using the six-point Abbott–Ionescu scheme and solved using the catch-up method. The ADI central difference scheme was used to solve the depth-averaged two-dimensional shallow water equations.
The vertical connection between the one-dimensional pipe network model and the two-dimensional surface flow model was established using a manhole and gutter inlet, whereas the weir flow equation and orifice equation were used to calculate the flow exchange.

ASTER GDEM elevation data were resampled to 17 m resolution through data reclassifying and depression filling in ARCGIS software. Road and building elevation data extracted from a satellite image map were merged with the resampled data using the MIKE solver. The terrain distribution map is shown in Figure 3.
The water resistance coefficients for different land cover according to the surface condition of the study area and software recommendations were as follows: road, 62.5 m1/3/s; green space, 25 m1/3/s; vacant land, 36 m1/3/s; building, 12.5 m1/3/s. The remaining parameters were as follows: dry boundary value, 0.002 m; wet boundary value, 0.003 m; eddy viscosity coefficient , where is the space interval and is the time step. The model parameters for different spatial resolutions were the same, regardless of the Coriolis force and other source terms.
The pipe network model was established on the basis of the measured data and relevant specifications. The sub-catchment area was divided according to node location using the Tyson polygon method. As shown in Figure 4, the impermeability of sub-catchment areas was obtained according to the runoff coefficients of different surfaces and the area-weighted average. The surface flow model and the pipe network model were coupled through vertical connections at manholes.
In this paper, a real flood event on 7 August 2017 was simulated using historical rainfall data (Figure 5). The model was tested via an investigation of inundation positions and simulation results. The validation result is shown in Figure 6. Fifteen inundation positions (Table 3) according to previous investigations were verified in the simulation results, thus indicating the good applicability of the established model.

4.3. Comparative Analysis of All Simulation Schemes

This paper took the Jianye district, which has experienced extensive urbanization, as the study area and focused on exploring and evaluating the effect of terrain resolution and artificial land cover on the simulation accuracy of urban flood models. The validated model was used to simulate hypothetic scenarios, which were developed using various resolutions (17, 35, and 70 m), representation methods (BB, RD, and BB + RD), and rainfall intensities (2 and 10 year return periods). RDA and RAA were calculated to evaluate the accuracy difference. Due to the extensive urbanization of the study area, the effect tendencies reflected in the results of this study could be helpful for flood models of similar urban districts. The most important study results based on Jianye district were as follows:

Conceptualization, Y.G.; methodology, Y.G. and X.Z.; supervision, Y.G.; writing—original draft, B.Z.; writing—review and editing, Y.G. and B.Z. All authors have read and agreed to the published version of the manuscript.

This research was funded by the National Natural Science Foundation of China (NSFC) (Grant No. 51979040). 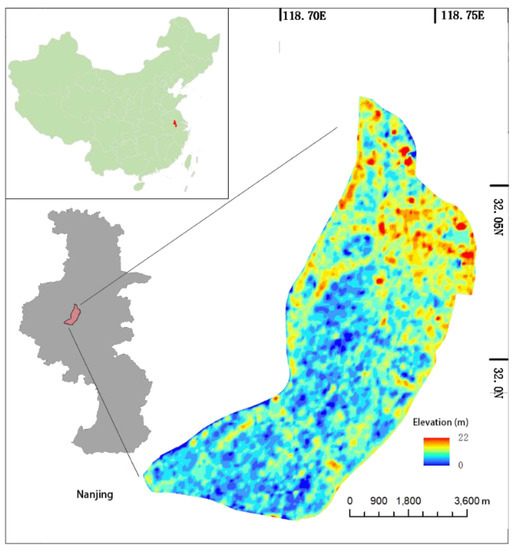 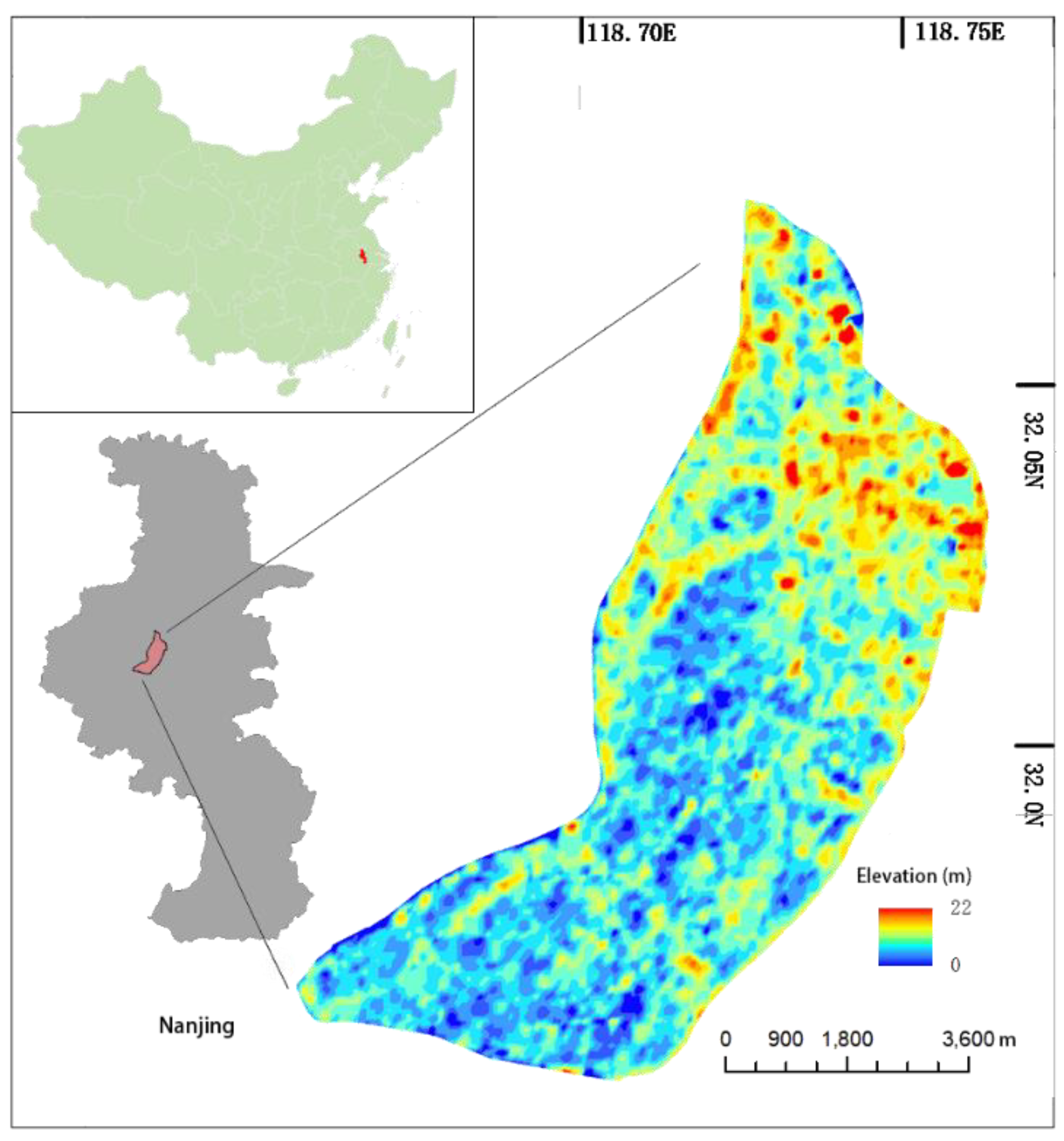 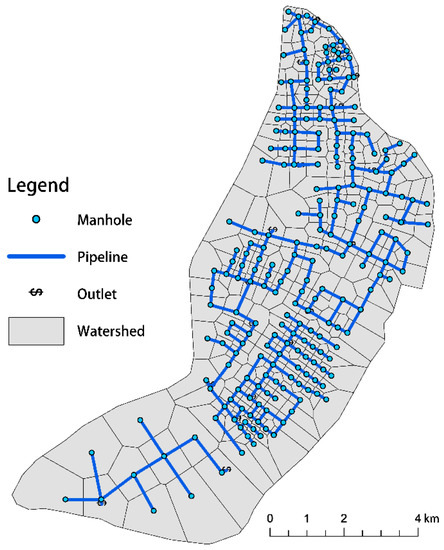 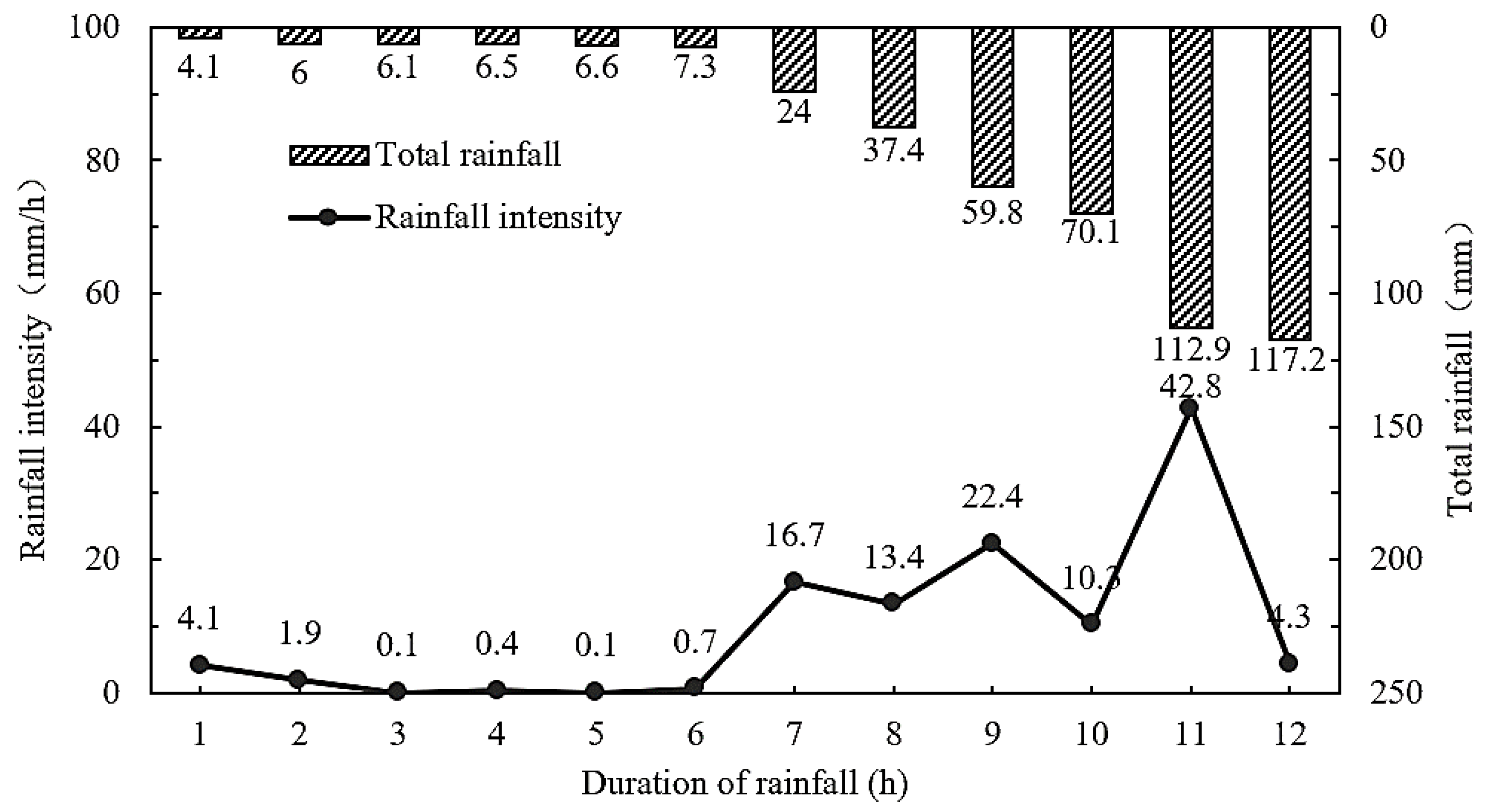 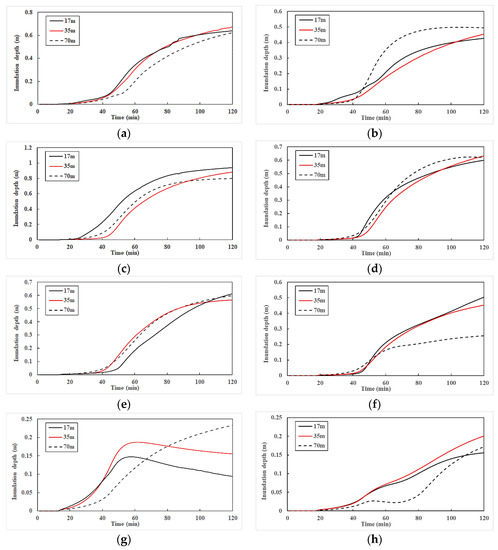 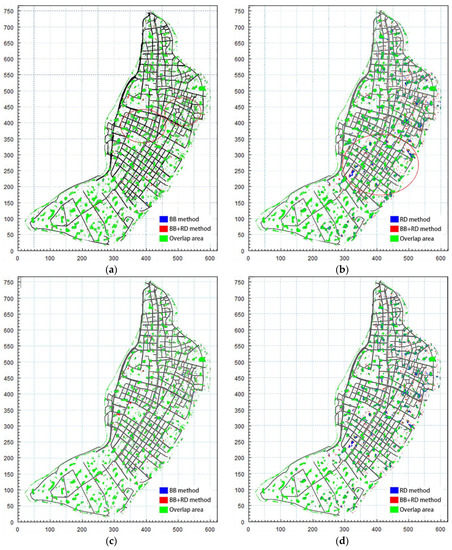 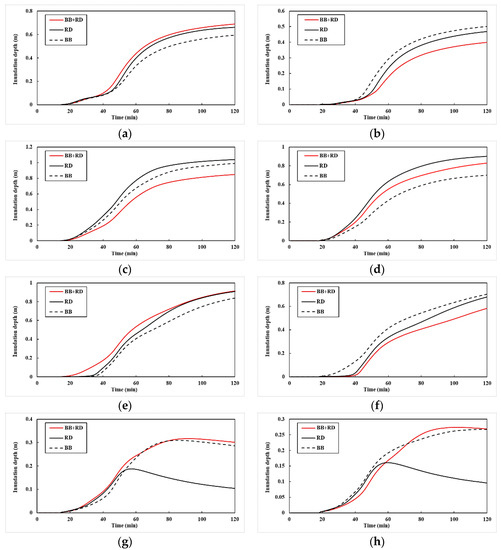 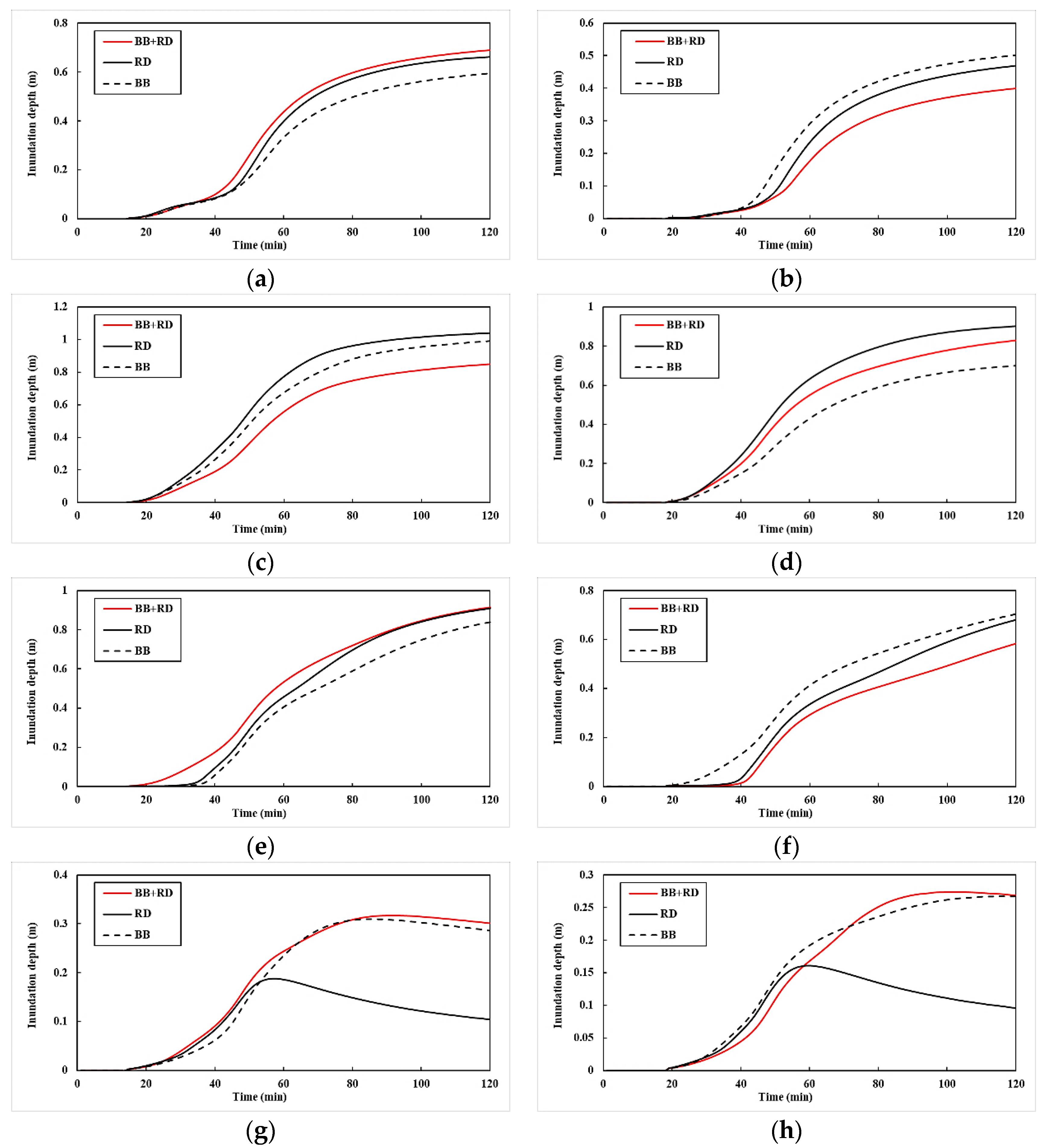 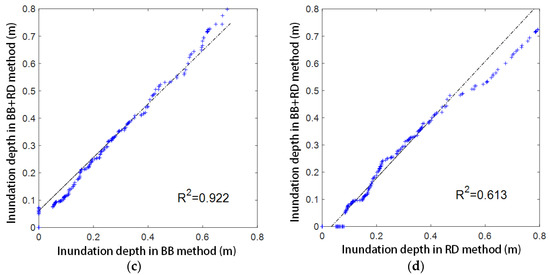 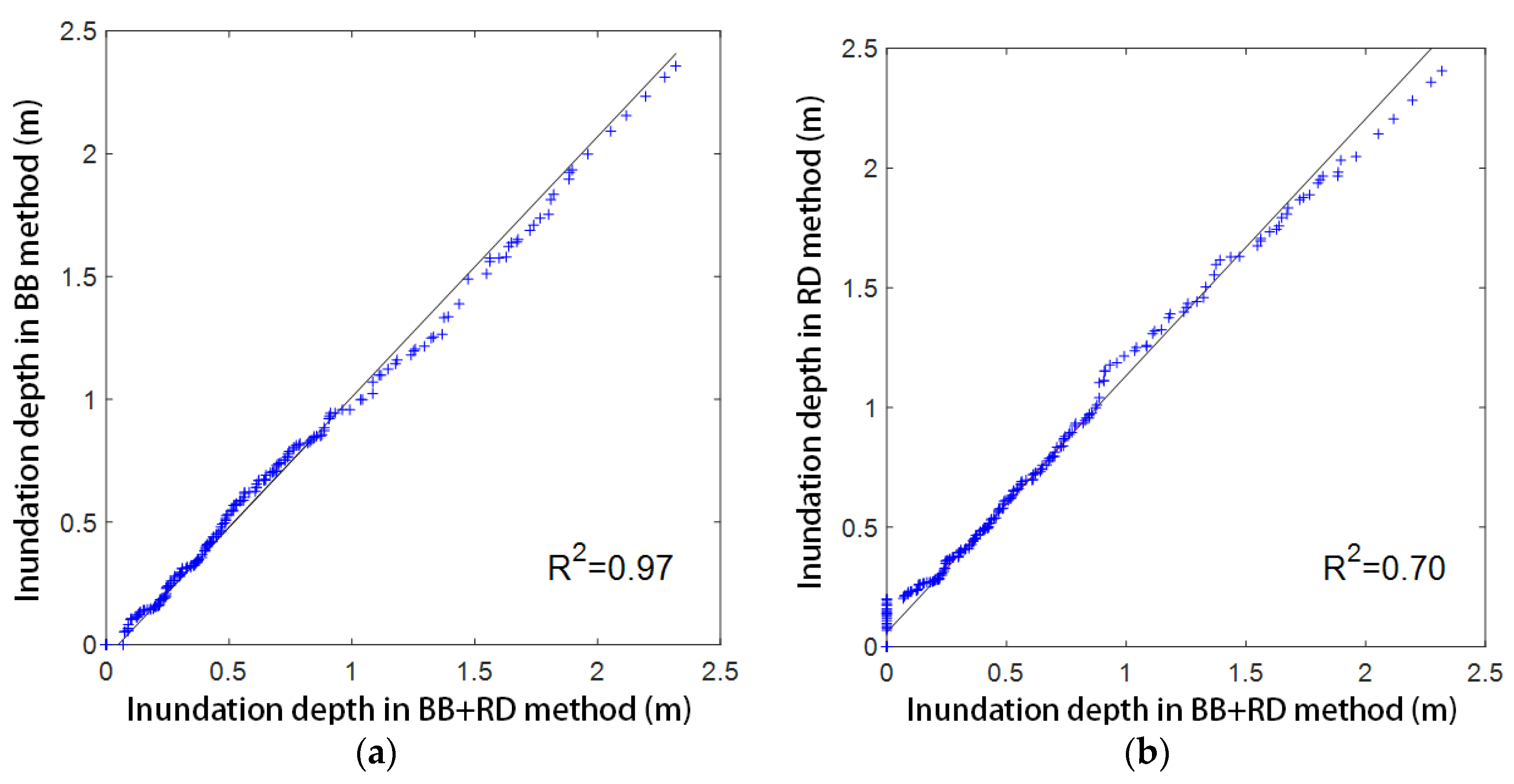