Holistic Design Approach of a Throttled Surge Tank: The Case of Refurbishment of Gondo High-Head Power Plant in Switzerland

Stream channel degradation is among the most widely documented symptoms of urban stream syndrome arising from watershed urbanization. Nevertheless, our present understanding of space and time scales associated with channel response to urbanization is poorly constrained and largely limited to assessments of non-cohesive systems. The purpose of this study is to assess the evolution of a cohesive, ephemeral river channel in response to watershed urbanization. The assessment of historical images document the stable, pre-urbanized channel conditions from 1870 to 1930. Historical assessments revealed a 131% increase in urbanized watershed area from 1930 to 1992, and a minimal increase in urbanized extent from 1992 to 2012. A 2012 lidar dataset was used to generate the modern long-channel profile, to reconstruct cross-channel profiles observed in 2002, and to estimate the volume flux of sediment removed from the channel from 1930 to 1992, and from 1992 to 2012. The long-channel profile reveals incision of up to 35 m in response to urbanization from 1930 to 1992. Cross-channel profiles reveal incision and widening of 2.5 and 3 m, respectively, from 2002 to 2012. Volume flux estimates indicate erosion rates of 9000 m3/yr during the first 62 years of the study period, and a flux of 4000 m3/yr after installation of stormwater control measures in 1992. Collectively, our findings highlight a cohesive channel that has undergone substantial incision and widening at a rate of ~0.20 m/yr since 1930, and the channel continues to adjust. Hence, we contend that the channel has not yet attained a new equilibrium “shape” at 82 years after peak land use change within the watershed, and that the channel will continue to adjust its shape until this new balance is achieved. View Full-Text
Keywords: watershed urbanization; cohesive river; morphology watershed urbanization; cohesive river; morphology
►▼ Show Figures 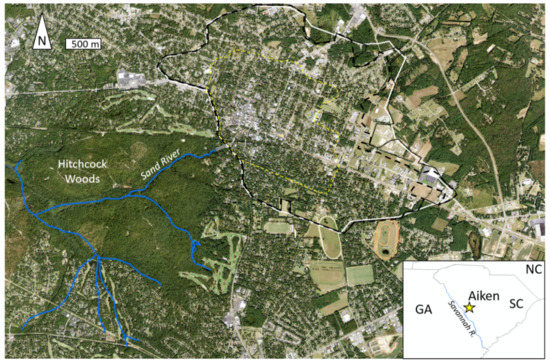