Saltwater contamination seriously affects water quality and land productivity of reclaimed farmlands along the Venice Lagoon, Italy. To characterize the hydrogeochemical dynamics involved in this phenomenon, a three-year study was carried out in an experimental field located at the southern margin of the Venice Lagoon. Soil matric potential, quality of soil pore water and groundwater, and soil physical and chemical properties were monitored at five monitoring stations. Relationships between Cl−, Na+, Mg2+, Ca2+, K+, SO42−, Br− ionic concentrations, and electrical conductivity of the water samples with the soil characteristics (e.g., texture, exchangeable cations) were investigated. Soil water flux direction was calculated and related to ion concentrations. Moreover, specific molar ratios (Mg/Ca, Na/Cl, Cl/Br, and SO4/Cl) were calculated to identify the main drivers affecting salinity in the field. The study confirmed that the experimental site was strongly affected by soil and water salinity, and two major contamination dynamics were identified. The first one was mainly driven by seawater intrusion from the near lagoon and salty watercourses, while the second was derived by the interactions between the peaty soil and salts that were originally in place, since the area was only reclaimed a few decades ago. The latter highlighted the potentiality of the experimental field to become an acidic sulfate environment. Ionic ratios were implemented and proved to be an important tool for the identification of salinity origin. View Full-Text
Keywords: seawater intrusion; coastal aquifer; salinization; coastal farmland; hydrogeochemistry seawater intrusion; coastal aquifer; salinization; coastal farmland; hydrogeochemistry
►▼ Show Figures 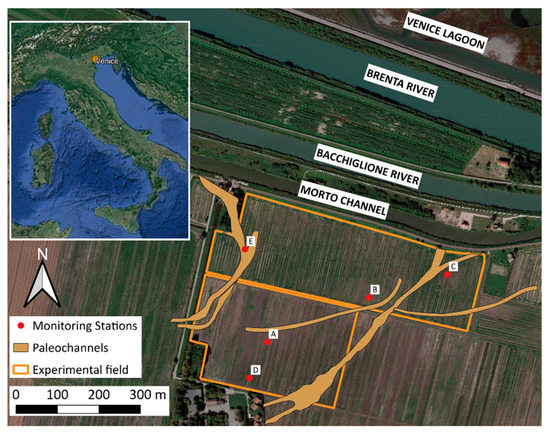