The Mediterranean region is one of the most water-scarce areas worldwide and is considered a climate-change hotspot. To assure the viability and competitiveness of irrigated agriculture, it is vital to implement strategies that can maximize water saving without compromising yield. Deficit irrigation (DI) for cultivating drought-tolerant species such as almond (Prunus dulcis (Mill.) D.A. Webb) can help in achieving this goal, while at the same time improving fruit chemical composition. This work evaluated the effect of DI techniques and cultivars on the chemical composition of almonds (cvs. Marta, Guara, and Lauranne) in order to elucidate the most suitable irrigation dose under water-scarcity scenarios. Three irrigation regimes were imposed: a control treatment (FI), which was fully irrigated, receiving 100% of the irrigation requirement (IR), and two sustained-deficit irrigation (SDI) strategies that received 75% (SDI75) and 65% (SDI65) of IR. Significant differences among cultivars and irrigation treatments were observed for antioxidant activity and organic acid, sugar, and fatty acid content, which were increased by the SDI strategies. In addition, highly significant correlations were found between leaf-water potential and components such as fumaric acid, sugars, and fatty acids. In terms of the cultivars, cv. Marta showed the highest antioxidant activity, cv. Guara was the richest in organic acids, and cv. Lauranne had the highest fatty acid content. Consequently, SDI strategies improved almond quality parameters related to their nutritional and sensory composition, with significant water savings (reductions of 25–35%) and without important yield loss. View Full-Text
Keywords: water stress; bioactive compounds; HydroSOStainable products; fatty acids; Prunus dulcis water stress; bioactive compounds; HydroSOStainable products; fatty acids; Prunus dulcis
►▼ Show Figures 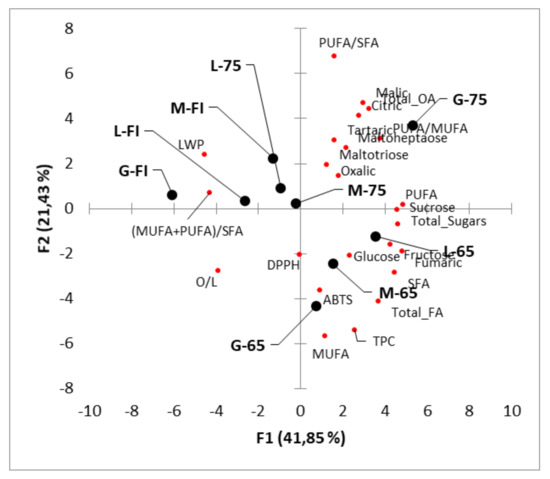