The common carp (Cyprinus carpio) is an invasive species in the rivers and waterways of southeastern Australia, and it has been implicated in the serious decline of many native fish species. Over the past 50 years, various control options have been explored, and to date, these have been ineffective or cost-prohibitive. Most recently, cyprinid herpesvirus 3 (CyHV-3) has been proposed as a biocontrol agent because of its high specificity and mortality rate. However, the virus is known to be only effective in a permissive water temperature range of approximately 16–28 °C. To define when this occurs, we undertook a hydrological reconstruction of five diverse river catchments (>130,000 km2) of southeastern Australia over three decades. This confirmed, in the studied areas, that while water temperatures are permissive from spring through to autumn, the time of year that this starts and ends is highly variable, interannually, and with strong latitudinal and altitudinal gradients between and within catchments. The results show that the virus should be effective with respect to water temperature throughout the water temperature range that carp occur in most of southeastern Australia. However, detailed water temperature estimation would still be required to determine the exact week of the start of release in any given catchment. Referring to observations in wild carp populations, we point out the limitation of developing a “release strategy” based solely on water temperature modelling and the need to incorporate fish biology and ecology into this planning. View Full-Text
Keywords: biocontrol; common carp; cyprinid herpesvirus 3; hydrology; Murray–Darling Basin; water temperature modelling biocontrol; common carp; cyprinid herpesvirus 3; hydrology; Murray–Darling Basin; water temperature modelling
►▼ Show Figures 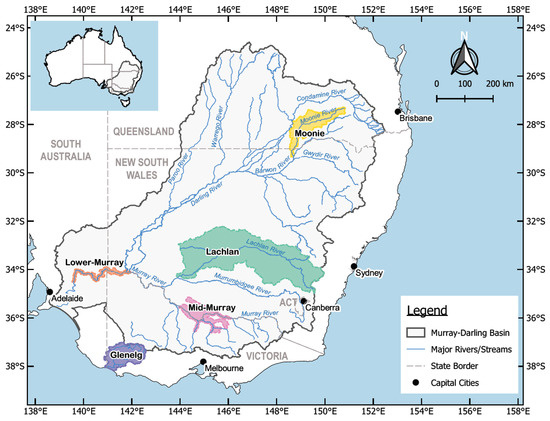