Evaluation of Multiple Responses Associated with Arsenic Tolerance and Accumulation in Pteris vittata L. Plants Exposed to High As Concentrations under Hydroponics

Comparison of Terrestrial Water Storage Changes Derived from GRACE/GRACE-FO and Swarm: A Case Study in the Amazon River Basin

The mass changes in the Earth’s surface internally derived from the Gravity Recovery and Climate Experiment (GRACE) and the GRACE Follow-On (GRACE-FO) missions have played an important role in the research of various geophysical phenomena. However, the one-year data gap between these two missions has broken the continuity of this geophysical research. In order to assess the feasibility of using the Swarm time-variable gravity field (TVGF) to bridge the data gap, we compared Swarm with the GRACE/GRACE-FO models in terms of model accuracy, observation noise and inverted terrestrial water storage change (TWSC). The results of the comparison showed that the difference between the degree-error root mean square (RMS) of the two models is small, within degree 10. The correlation between the spherical harmonic coefficients of the two models is also relatively high, below degree 17. The observation noise values of GRACE/GRACE-FO are smaller than those of Swarm. Therefore, the latter model requires a larger filter radius to lower these noise levels. According to the correlation coefficients and the time series map of TWSC in the Amazon River basin, the results of GRACE and Swarm are similar. In addition, the TWSC signals were further analyzed. The long-term trend changes of TWSC derived from GRACE/GRACE-FO and the International Combination Service for Time-variable Gravity Fields (COST-G)-Swarm over the period from December 2013 to May 2020 were −0.72 and −1.05 cm/year, respectively. The annual amplitudes of two models are 15.65 and 15.39 cm, respectively. The corresponding annual phases are −1.36 and −1.33 rad, respectively. Our results verified that the Swarm TVGF has the potential to extract TWSC signals in the Amazon River basin and can serve as a complement to GRACE/GRACE-FO data for detecting TWSC in local areas. View Full-Text
Keywords: GRACE; Swarm; GRACE-FO; Amazon River basin; terrestrial water storage change; time-variable gravity field; data gap GRACE; Swarm; GRACE-FO; Amazon River basin; terrestrial water storage change; time-variable gravity field; data gap
►▼ Show Figures 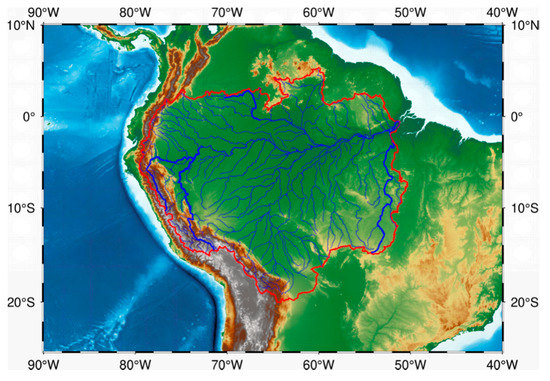