Aquatic Insects and Benthic Diatoms: A History of Biotic Relationships in Freshwater Ecosystems

The most important environmental characteristic in streams is flow. Due to the force of water current, most ecological processes and taxonomic richness in streams mainly occur in the riverbed. Benthic algae (mainly diatoms) and benthic macroinvertebrates (mainly aquatic insects) are among the most important groups in running water biodiversity, but relatively few studies have investigated their complex relationships. Here, we review the multifaceted interactions between these two important groups of lotic organisms. As the consumption of benthic algae, especially diatoms, was one of the earliest and most common trophic habits among aquatic insects, they then had to adapt to the particular habitat occupied by the algae. The environmental needs of diatoms have morphologically and behaviorally shaped their scrapers, leading to impressive evolutionary convergences between even very distant groups. Other less evident interactions are represented by the importance of insects, both in preimaginal and adult stages, in diatom dispersion. In addition, the top-down control of diatoms by their grazers contributes to their spatial organization and functional composition within the periphyton. Indeed, relationships between aquatic insects and diatoms are an important topic of study, scarcely investigated, the onset of which, hundreds of millions of years ago, has profoundly influenced the evolution of stream biological communities. View Full-Text
Keywords: coevolution; epizoosis; grazing; periphyton; scrapers coevolution; epizoosis; grazing; periphyton; scrapers
►▼ Show Figures 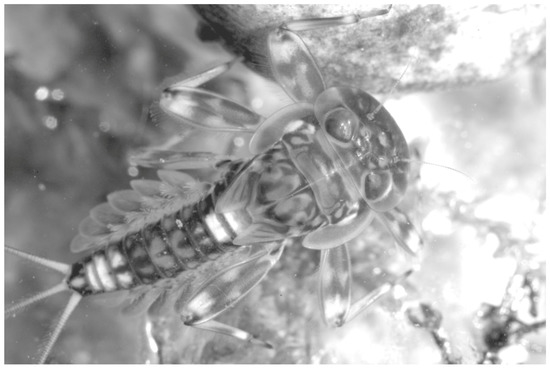