Distributions, Relationship and Assessment of Major Ions and Potentially Toxic Elements in Waters of Bosten Lake, the Former Largest Inland and Freshwater Lake of China
Next Article in Special Issue

Eleven basins in Illinois, Iowa, Minnesota, and Wisconsin were selected for this study (Table 1, Figure 1). The basins fall within the forecasting region of the North Central River Forecasting Center (NCRFC). This region is characterized primarily by forested hills and lakes in Minnesota and Wisconsin and plains and farmlands in Illinois and Iowa. The uppermost forecast points on the rivers were selected to eliminate the need to model the inflow of water from upstream locations.
The study period spans 14 June–5 October 2018. To be selected, the streamflow events had to have evidence of a sharp increase in streamflow due to forecasted precipitation, and the observed maximum discharge had to exceed a value higher than the 75% exceedance of the June–September streamflow climatology for that basin based on the available data from the United States Geological Survey (USGS). A total of 109 events were examined across the 11 basins, with 33 of the events exceeding the action stage.

Ensemble streamflow forecasts were generated using the spatially lumped Sacramento Soil Moisture Accounting model (SAC-SMA) [44], which is the forecast model used by the NCRFC. Inputs to the SAC-SMA are basin-averaged precipitation and potential evapotranspiration, and the output is basin discharge. The SAC-SMA accounts for water storage and flows in the subsurface using a two-layer soil structure. Each zone has free water storages that account for water drainage by gravity and tension water storages that account for evaporation and transpiration. Evaporation and transpiration are calculated based on the potential evapotranspiration for the time step and the available water in the tension storage. Water inflow to the stream channel is a combination of surface runoff, flow from the upper soil zone, and flow from the lower soil zones, which are computed as a function of soil storages, percolation capacities, and precipitation rates and controlled by 13 primary parameters [45]. Channel inflow is routed using a unit hydrograph to calculate basin discharge.
The model was applied using the 6-hour time step used by the NCRFC for operations. Basin-specific model parameters and unit hydrographs were obtained from the NCRFC for each study basin. The SAC-SMA model states were initialized using a 5-day spin-up period starting from states obtained from the NCRFC for a date 5 days prior to the forecasts followed by precipitation input up to the forecast start date. In initial testing, it was found that a short spin-up period of about 4–8 timesteps was needed for the simulated discharge to reach observed discharges values primarily due to uncertainty in the states of the routing routine.

To evaluate the performance of the forecasting technique, error (the difference between the forecasted and observed values), percent difference (PD), and the rank probability score (RPS) were computed. The PD is the average difference between the observed peak discharge (Qobs) and the forecasted peak discharge (Qfcst) divided by the observed peak discharge for a set of N forecasts:
PD was calculated for each probability of exceedance value and averaged by event and basin.
RPS provides an overall measure error for a set (M) of multi-category probabilistic forecasts [46,47,48,49] and is calculated as: where J is the number of forecast categories, F is the cumulative distribution of the forecast probability across the forecast categories, and O is the cumulative distribution of the probability of the observed event across the forecast categories where the value is either 0 (not observed) or 1 (observed).
The following four flow categories were used based on discharge thresholds defined by the NCRFC for each basin (as in [29]): (1) flood event, defined as the peak discharge exceeding the minor flood discharge; (2) action stage, defined as the peak discharge exceeding the action stage discharge but lower than the minor flood discharge; (3) 50% of the action stage, defined as a the peak discharge greater than half of the action stage but less than the action stage; and (4) nonevent, defined as the peak discharge occurring at less than 50% of the action stage. When comparing NCRFC, HRRRE, and HREF, forecast probabilities for each flow category were calculated using the discharge associated with the 5%, 50%, and 95% exceedance probabilities, as these are the exceedance probabilities used by the NCRFC. A linear interpolation was used to find the forecast probability for the four discharge thresholds. RPS values range from 0 to 1, with 0 indicating a perfect forecast.
To compare the skill of the forecasts created in this study using HRRRE and HREF PQPFs to those issued operationally, RPSs and relative percentage frequency were also computed for probabilistic discharge forecasts generated by the NCRFC. Relative percentage frequency is the frequency of occurrence for a given probability of exceedance. For example, for a reliable forecasting technique, out of 100 rainfall events, it would be expected that the observed rainfall would exceed the 25% probability of exceedance approximately 25 times, while for the 90% probability of exceedance, this would occur approximately 90 times. The NCRFC generates its probability of discharge exceedance forecasts using a 46-member ensemble produced by the Weather Prediction Center (WPC). This ensemble includes members from the Short-Range Ensemble Forecast (SREF) system (both ARW and NMMB), GEFS (Global Ensemble Forecast System), and ECMWF (European Center for Medium-Range Weather Forecasts) ensembles, and the deterministic runs of the GFS, NAM, WRF Hi-res ARW, WRF Hi-Res NMMB, and ECMWF models [50]. The forecasts also take into account WPC’s own QPF forecast and the non-time lagged HREF members. WPC creates rainfall forecasts at 9z and 21z, while the NCRFC generates the probability discharge forecasts at 18z out to 168 h. Thus, NCRFC uses the 9z rainfall forecasts from WPC to make the probability streamflow forecasts. In total, 79 forecasts out of the 109 forecasts generated from the HRRRE and HREF forecasts across seven shared basins were used to compare the NCRFC forecasts to those generated with our PQPF technique.
Although a purely apples-to-apples comparison of our forecasts to operational forecasts was not possible because the forecasts were made at different times, to have the most appropriate comparison possible, the NCRFC probability forecasts closest in time to the HRRRE and HREF run times were used. For example, if 00 UTC HRRRE or HREF output was used, the 18 UTC NCRFC probability forecast generated six hours beforehand was selected, and this occurred on 23 occasions. If 12 UTC HRRRE or HREF output were used, archived radar imagery from the University Corporation for Atmospheric Research [51] was examined to see if any significant rainfall occurred during the 12–18 UTC period. If there was no rainfall in the basin during this period, the NCRFC probability forecasts generated at 18 UTC (six hours after the HRRRE and HREF initializations) were selected, which happened in 41 of the HRRRE and HREF events initialized at 12 UTC. If rainfall was present in the basin before 18 UTC, the previous 18 UTC forecast (18 h prior) was used, which happened 15 times. Thus, this approach resulted in selecting NCRFC forecasts issued before the HRRRE and HREF forecasts almost half the time, with those forecasts issued after the HRRRE and HREF the other half of the time, so any error related to longer lead times for one forecast versus another should be relatively small. Additional factors may influence differences in forecast skill such as the NCRFC forecasts using the much larger WPC forecast ensemble of 46 members compared to HRRRE’s 9 and HREF’s 8 members. In the results that follow, discharge forecasts based on the different probability of exceedance values derived from HRRRE and HREF PQPF or issued by the NCRFC will be identified using the abbreviation of HRRRE/HREF/NCRFC-__% where the percentage value refers to the exceedance value.

This study examined a technique that derived rainfall time series for different probabilities of exceedance from ensemble PQPF and used it as input to the SAC-SMA hydrologic model to generate ensemble streamflow forecasts. Two different convection-allowing ensembles, HRRRE and HREF, were tested for 109 events across 11 small-scale basins throughout the Upper Midwest. A variety of different techniques were used to analyze forecasts of peak discharge, and comparisons were made with probabilistic streamflow forecasts generated by the NCRFC.
The HRRRE-based forecasts had the best ability to predict streamflow as indicated by the lowest average RPS of 0.32, and the best agreement between the predicted exceedance probabilities and the frequency that observed discharges exceeded these values. HRRRE likely performed better than HREF because it had lower predicted precipitation amounts for all of the probability of exceedance values examined, which were more similar to the observed rainfall. For HREF-based forecasts, the higher predicted precipitation amounts led to discharge forecasts that, on average, overpredicted the peak discharge. Finally, the NCRFC forecasts frequently underpredicted observed discharge, resulting in the worst RPSs and an increase in the number of times the observed discharges exceeded forecasted discharges associated with the exceedance probabilities. A case study focused on the 14 June Ames flood event suggests that the forecasting technique presented here may provide improved information compared to current forecasting methods to give emergency personnel and the public early information about the possibility of streamflow rises.
The discharge values associated with low probability of exceedance forecasts for both the HRRRE- and HREF-based forecasts were unreasonably large, with no observations having discharges as high as those predicted. The high rainfall amounts associated with low probabilities of exceedance are applied at all grid points within a basin, resulting in unreasonably high discharge forecasts. This problem was especially prevalent for the Root River, the largest basin examined, indicating that the overprediction worsens with basin size, as would be expected due to the application of the same exceedance amounts at all grid points in a basin.
This problem could be reduced in the future by calibrating the probability of exceedance values, such as by adjusting them to match observed frequencies during a training period, or by decreasing rainfall amounts associated with given probabilities of exceedance so that the magnitude of the predicted discharges would be reduced, or by calibration of the streamflow forecasts related to the exceedance values themselves. Two simple preliminary tests applied to the streamflow forecasts resulted in improvements in skill for the HREF-based forecast, with smaller improvements for the HRRRE-based one. Another refinement that might improve this technique would be to use an analysis of the spatial distribution of QPE from multiple warm-season rainfall events to determine the typical areal pattern of precipitation. This analysis of the spatial distribution would require the ability to distinguish between different types of convective systems occurring in the model output. Then, the distribution pattern could be used to adjust the rainfall amounts associated with PQPF values over the basins. Combining these techniques would allow the use of multiple different exceedance values in the spatial averaging, instead of a single blanket exceedance probability. This would allow more accurate precipitation forcing to be fed into the hydrologic model during each timestep and take advantage of the presumed value added by the analysis that enters into the PQPF that is absent from the raw QPF members.

The author would like to thank the North Central River Forecast Center, especially Brian Connelly, for providing the initial conditions data for the SAC-SMA model and the probability forecasts from the NCRFC. 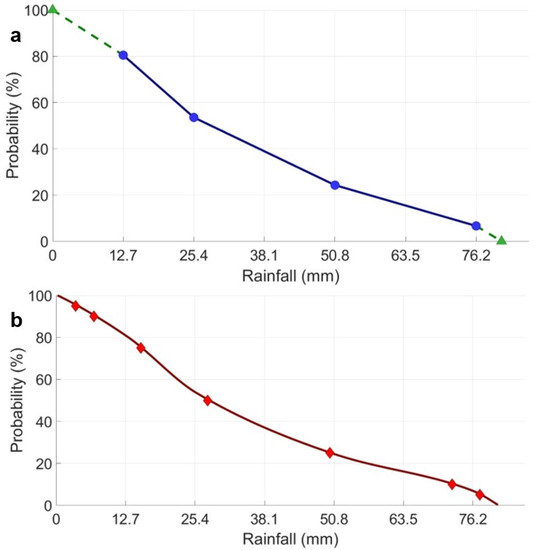 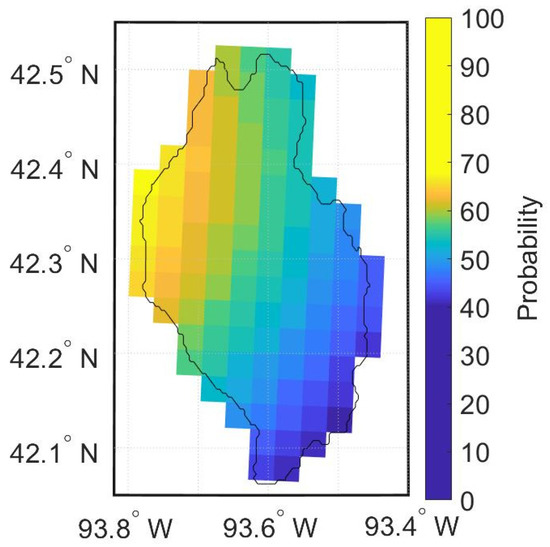 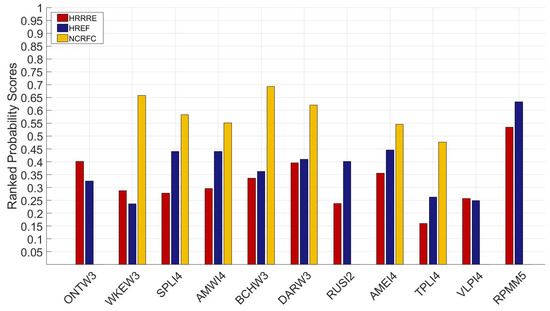 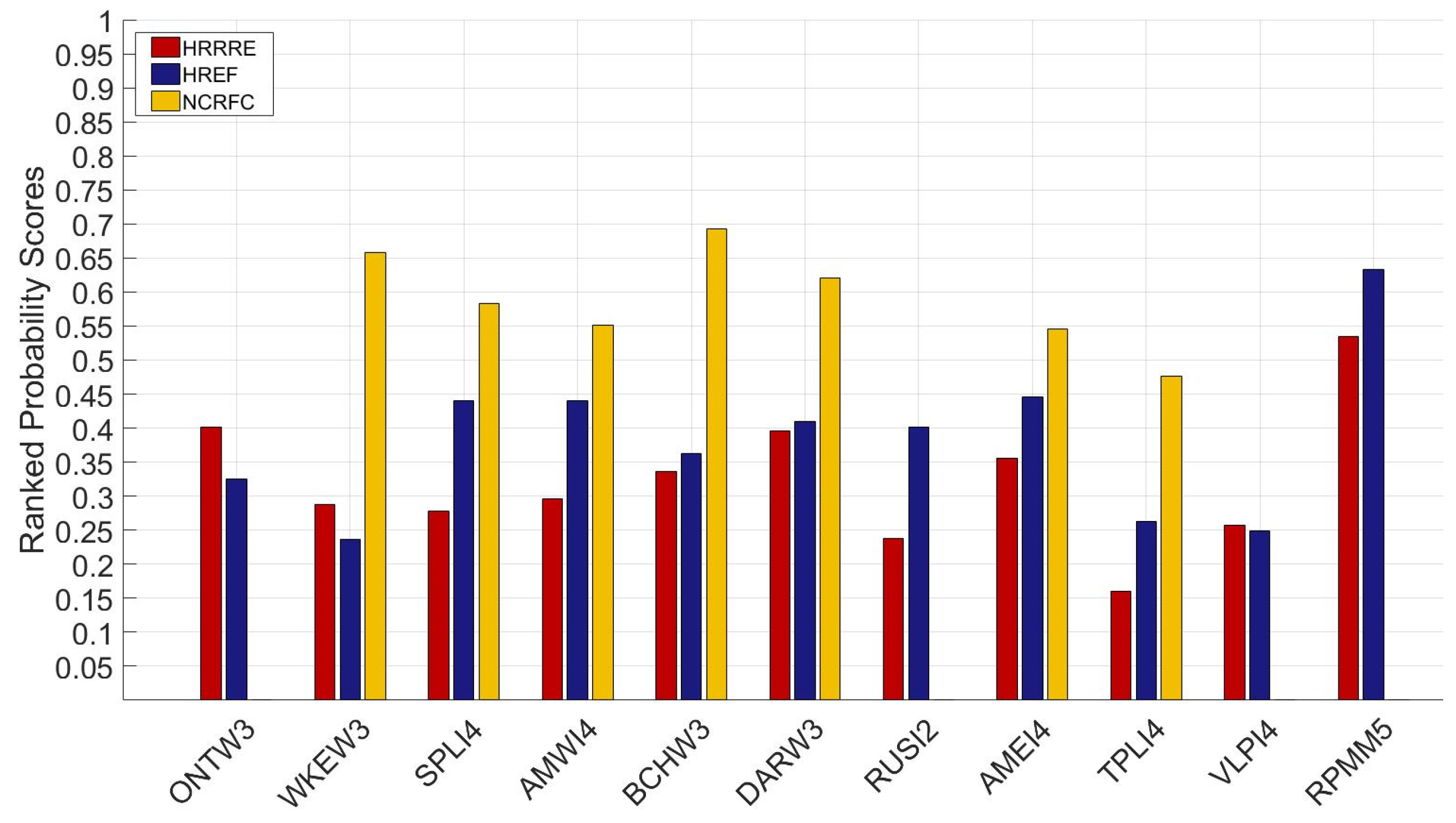 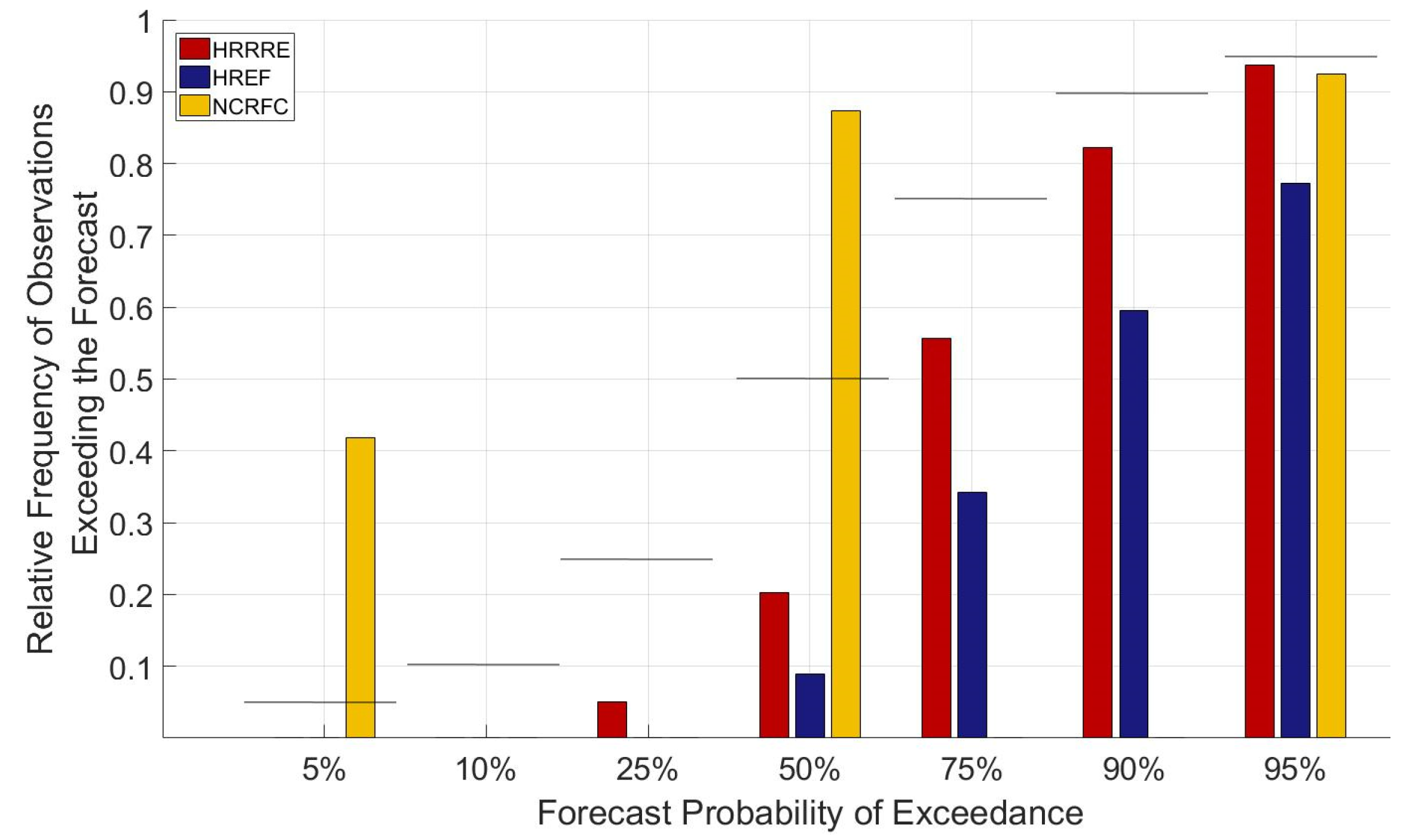