Simulating the Impact of Climate Change with Different Reservoir Operating Strategies on Sedimentation of the Mangla Reservoir, Northern Pakistan
Next Article in Special Issue

In view of the important role to in revealing climate wet/dry tendency, Standardized Precipitation Index (SPI) was applied to identify wetness/dryness trends and their relationship with large-scale climate oscillations in the Yangtze River Delta (YRD) from 1957 to 2016. The daily precipitation in 43 meteorological stations was used to calculate SPI time series for a time scale of 12 months. The results indicate that there are three dominant geographic sub-regions of SPI-12 modes. Increasing trends dominate, except for some of the northern regions. High frequencies of wet and dry events are mainly located in the southern regions and part of the northwestern and southeastern regions, respectively. Temporally, large-scale dry events mainly happened in the 1960s–1970s, and wet events in the 1990s and the 2010s. They show a tendency towards more wet conditions of the regional climate in the YRD. The climate variations are primarily controlled by large-scale atmospheric oscillations. The North Atlantic Oscillation (NAO) and Southern Oscillation Index (SOI) have much higher influence on the variation of SPI in the mid and east; whereas the Pacific Decadal Oscillation (PDO) and North Pacific Index (NP) show higher correlations with SPI in the northern regions of the YRD. View Full-Text
Keywords: standardized precipitation index (SPI); climate tendency; frequencies of wet/dry events; climate oscillations; Yangtze River Delta standardized precipitation index (SPI); climate tendency; frequencies of wet/dry events; climate oscillations; Yangtze River Delta
►▼ Show Figures 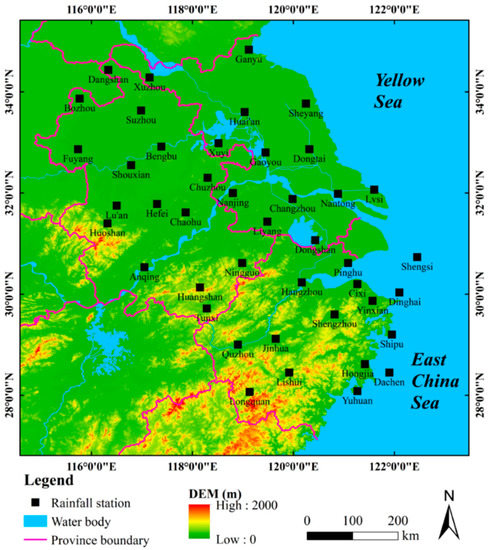