The Groundwater Demand for Industrial Uses in Areas with Access to Drinking Publicly-Supplied Water: A Microdata Analysis
Next Article in Special Issue

Building a System Dynamics Model to Support Water Management: A Case Study of the Semiarid Region in the Brazilian Northeast

Yunnan province is in southwest China. Its vertical terrain decreases from highest elevations of more than 5000 m in the northwest to low elevations of less than 100 m in the south. As shown in Figure 1, Jinasha River, Lancang/Mekong River and Nu/Salween River travel across this province, supplying extensive hydropower [32]. Yunnan’s installed hydropower capacity reached 66,660 MW in 2018, about 19% of China’s total installed hydropower capacity, and about 71% of the province’s total installed power capacity and 85% of its electricity generation. As a powerhouse of “West to East Power Transmission”, about half of hydrogeneration is transmitted to eastern coastal provinces like Guangdong and Guangxi. Hydropower is vital to Yunnan and other provinces receiving electricity from Yunnan.
With its geographic location and complex topography, Yunnan’s hydrology is controlled by the dry continental monsoon in winter, and influenced by southwest and East Asian monsoons in summer [33]. It is sensitive to climate change [34]. Therefore, it is important to evaluate influences of climate change on Yunnan’s hydropower generation.
Lancang cascaded hydropower system (LCCHS) and Jinsha cascaded hydropower system (JSCHS) are the main power sources of Yunnan, representing more than 60% of Yunnan’s total installed hydropower capacity and generation. They illustrate the effects of climate change on Yunnan’s hydropower, so we mainly concentrate on these two CHSs in this study. The location and basic information on hydropower stations in these two CHSs appear in Figure 1 and Table 1.

In this study, monthly precipitation for 1961 to 2016 was obtained from China Meteorological Data Service Center (https://data.cma.cn) and China Hydrology Data Project [35]. Historical inflow data were collected by the hydropower stations.
Many GCMs provide projected climate change datasets. However, most models have coarse spatial resolutions, and their results need to be downscaled for regional scale studies. However, lack of sufficient historical data in China often hinders the use of these datasets. The US National Aeronautics Space Administration (NASA) Earth Exchange Global Daily Downscaled Projections (NEX-GDDP) provide downscaled projected climate change data for Representative Concentration Pathways (RCP) of RCP4.5 and RCP8.5 from 21 GCMs, which were produced and distributed under Coupled Model Intercomparison Project Phase 5 (CMIP5). The high spatial resolution of 0.25 degrees (0.25° × 0.25°, about 25 km × 25 km) and daily temporal resolution makes this regional study feasible. Each climate projection contains daily precipitation, maximum temperature, and minimum temperature. In this study, 5 GCMs for both the low emissions scenario of RCP4.5 and the high emissions scenario of RCP8.5 were obtained from NEX-GDDP. These 5 GCMs are from different countries or institutes that have relative independence and have been used in some studies for China [36,37], this study tries to use these models to show the hydrology trends and analyze hydropower generation trends under climate change scenarios. The basic information of these datasets appears in Table 2. This study focuses on climate change effects to long term monthly hydropower operation, so daily climate change data is aggregated to monthly values, then the grid data is transformed to meteorological station data by bilinear interpolation.

Figure 3a shows precipitation change between the projected 2020–2100 annual average and the historical 1961–2016 annual average, and Figure 3b shows monthly precipitation change between the projected 2020–2100 monthly average and the historical 1961–2016 monthly average in Jinsha catchment. These two figures show similar changes with the Lancang River.

Backpropagation neural networks (BPNN) are black-box models and have no physical properties. However, they do not require a lot of physical property data and are easy to use, and have been widely used in forecasting streamflow [38,39]. The runoff in both Lancang River and Jinsha River is mainly from rainfall and groundwater, with little glacier and snowmelt runoff for the middle and lower reaches of these rivers [25,40,41]. Therefore, this paper takes the monthly precipitation of each meteorological station in the upstream of each hydropower station and the previous monthly inflow as inputs, without considering temperature change effects on seasonal streamflow. A three-layer BPNN precipitation-runoff model is built for each hydropower station to forecast streamflow under each GCMs. Observed data from 1961 to 2000 is used to calibrate, and observed data from 2001 to 2016 is used to test these models. Widely used statistical indicators are adopted to evaluate model performance: coefficient of correlation (R), Nash Sutcliffe efficiency (NSE), and mean absolute percentage error (MAPE), as defined in Equations (1)–(3). where is the sample size, and and are the observed inflow and the predicted inflow of sample i, respectively. and are the mean value of observed inflow and predicted inflow, respectively.
The training and validation statistical values of each station appear in Table 3. The values show high R (about 0.95) and NSE (0.9), and good MAPE (about 15%) in each station.

The inflow for each station under each GCM and scenario is projected with the trained model and the meteorological data. For the first stations of each CHS (Gongguoqiao on LCCHS, Liyuan on JSCHS), Figure 4 and Figure 5 show the monthly inflow change between the projected 2020–2100 monthly average and historical 1961–2016 monthly average; Figure 6 and Figure 7 show the projected yearly inflow. Figure 4 shows that inflow of Gongguoqiao increases during May to July in GCMs of RCP4.5 and increases during May to October in RCP8.5. Meanwhile, Figure 5 shows that inflow at Liyuan station increases from March to June and decreases from July to September. Since both stations are the first station of each CHS, the inflow changes are not exactly the same as the basins’ average precipitation. Figure 6 and Figure 7 show that streamflow varies greatly for different projections, but most projections show growth trends consistent with trends of precipitation. Moreover, Table 4 shows the statistical values of historical yearly inflow and projected yearly inflow, showing that the standard deviation (SD.) and coefficient of variation (C.V) of yearly inflow also tend to be larger in most GCMs, indicating more variable inflow in the future.

The main function of most reservoirs in southwest China is to generate electricity. The operating objective is set to maximize long-term power generation with a monthly time step while satisfying various constraints. The overall objective is: where is the total electricity generation with the unit of kWh. T is the number of periods. is the number of hydropower plants. is the time length of period with the unit of hours. is the power output of plant at period with the unit of kW, which can be expressed as: where is the generation efficiency of plant at water head , which is obtained by interpolation of the water head generation efficiency curve of the hydropower plant offered by the power dispatching department. and are the sum turbine flow and head of plant at period , respectively.
The constraints are:

Dynamic programming (DP) can guarantee global optimal solutions to multi-stage decision problems and is widely used in water resources problems [42,43]. However, its computation burden increases exponentially with the problem scale, and so can only approximately solve large-scale problems. The progressive optimality algorithm (POA) is a variant of DP, which divides the multi-stage decision problem into a sequence of two-stage subproblems to reduce computation burden [44,45,46]. This paper uses POA to calculate operation scheduling under climate change. The POA for this operation problem is as follows:
This approach quickly provides a locally optimal solution and is widely employed for this region’s hydropower operations [44,45,47,48].

Figure 8 and Table 5 show maximized generation and output for the LCCHS and JSCHS. Both show hydroelectricity generation increases in all climate change projections and show some features:

Table 6 shows some statistics on energy and water spills, average annual storage range and average annual inflow range. Figure 9a,b shows the monthly average percentage of inflow, generation and spillage of all GCMs; Figure 9c,d shows the peak generation (generation of the flood season from June to October) and spillage distribution; Figure 9e,f shows the yearly average spill for each station. There are some clear insights to be drawn from these:

Figure 10 shows the generation of the most severe single- and multi-year droughts which had less incoming streamflow than the historical average for each GCM under different scenarios compared to historical values. More droughts occur in most cases. (1) Generation in the year with the worst drought is less than the historical minimum in all cases in both CHSs; some decrease by about 31% compared to the historical average. (2) Larger multi-year reductions in generation occur in some cases in both CHSs. In some cases, the multi-year drought is so severe that yearly generation decreases by 18% for five successive years. For example, the most severe successive two-year drought decreases generation by 26% and 18% in MRI-CGCM3 under RCP4.5 in LCCHS and JSCHS, respectively. Successive five-year and eight-year droughts decrease generation by 15% in some cases, which is much more severe than the historical average. (3) Effects of multi-year droughts on LCCHS are more serious than their impact on JSCHS in most cases. Since hydropower generation represents more than 80% of Yunnan’s total power generation, this may sometimes result in the generation of insufficient electricity, seriously impacting the electricity supply under climate change. Furthermore, nearly half of Yunnan’s hydroelectricity is transferred to eastern provinces of China like Guangdong and Guangxi, and this proportion may grow with continued hydropower growth in Yunnan. The transferred electricity may fall dramatically in acute drought years under climate change with large-scale impacts.

This paper tries to suggest adaptations for CHSs like JSCHS and LCCHS in the face of climate change. Different basins have specific characteristics and may be affected by climate change differently. Therefore, different measures may be needed, accordingly.

(1)
The results show that hydropower generation is prone to increase in all projections, especially under the scenario of RCP8.5, and could become more variable under climate change. Generation in severe drought may be much lower, especially in JSCHS, due to lack of seasonal reservoir storage capacity.
(2)
The max yearly spill and its SD. for most projections is much larger than with historical hydrology in both CHSs, showing that annual spill is prone to fluctuate more with climate change.
(3)
Both CHSs will face more droughts, and consecutive multi-year droughts may cause severe adverse effects on electricity supply and export in Yunnan.
(4)
The planned Longpan large reservoir in upper Jinsha can increase power generation, reduce spill and alleviate uneven output during flood seasons and dry seasons remarkably. Adding turbine capacity to the Gongguoqiao plant on LCCHS can increase generation slightly, but reduces spill much more. Such solutions may be useful to help alleviate adverse effects of climate change.

Conceptualization, B.L. and J.R.L.; Methodology, B.L.; Data curation, L.L.; Resources, S.L., G.L. and C.C. All authors have read and agreed to the published version of the manuscript. 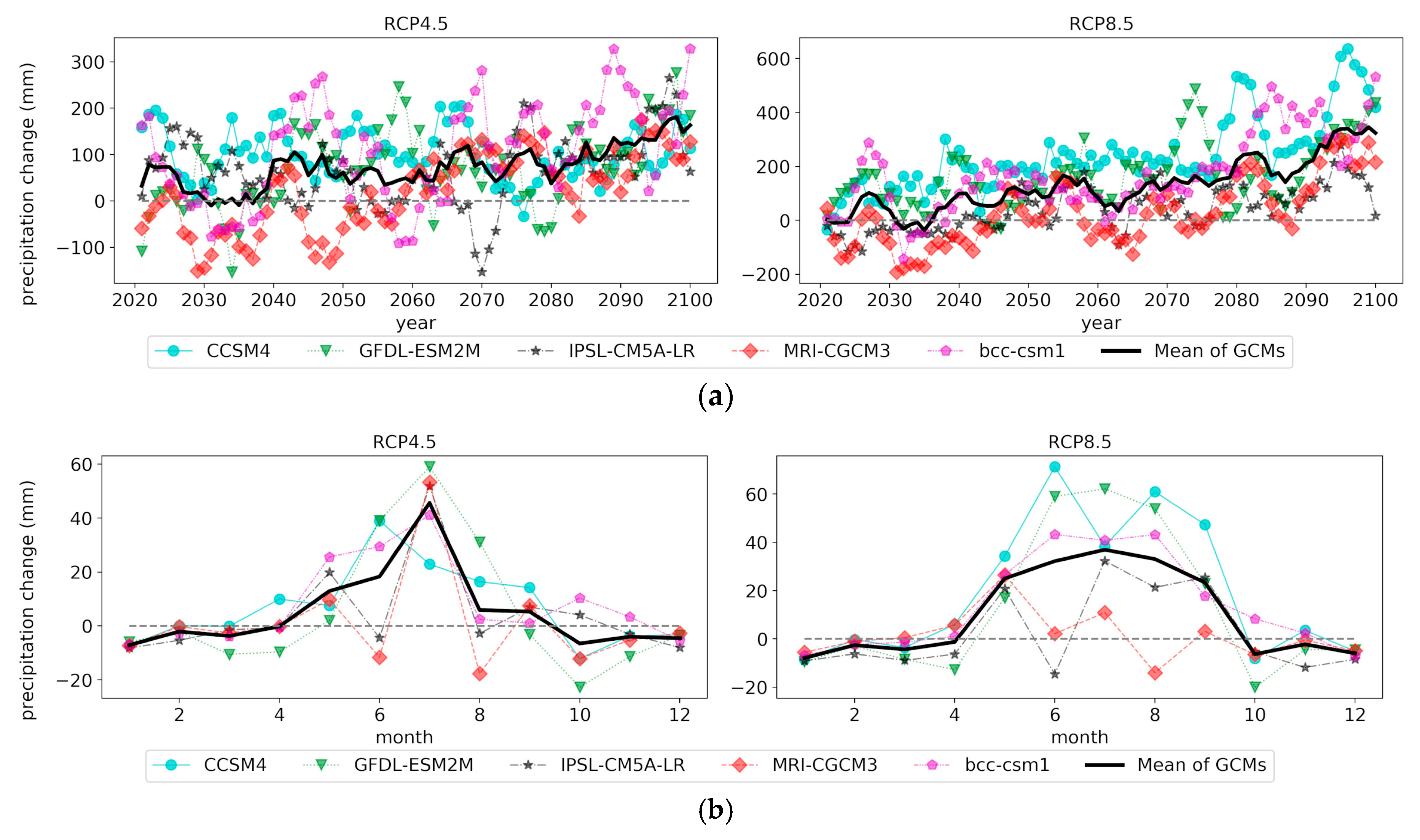 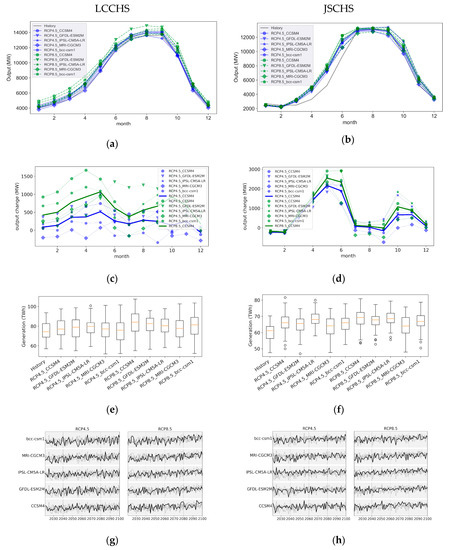 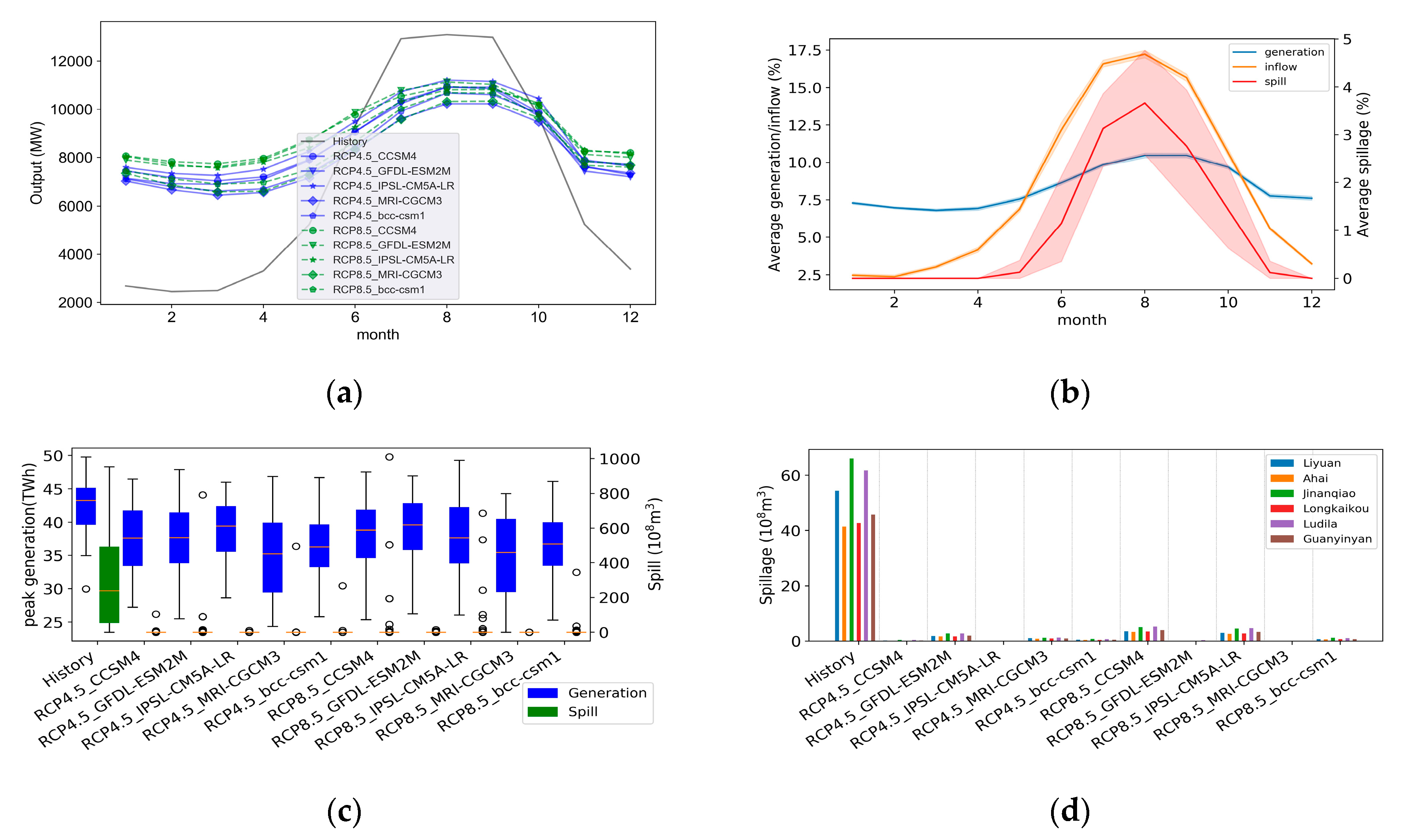