Physical Experiment and Modeling of the Transport and Deposition of Polydisperse Particles in Stormwater: Effects of a Depth-Dependent Initial Filter Coefficient
Next Article in Special Issue

Nitrogen and Phosphorus Loads in Greek Rivers: Implications for Management in Compliance with the Water Framework Directive
Previous Article in Journal

Water Quality and Hydromorphological Variability in Greek Rivers: A Nationwide Assessment with Implications for Management

Flood Risk Assessment of the Wadi Nu’man Basin, Mecca, Saudi Arabia (During the Period, 1988–2019) Based on the Integration of Geomatics and Hydraulic Modeling: A Case Study

This study aims to assess the impact of flash floods in the Wadi Nu’man basin on urban areas, east of Mecca, which are subjected to frequent floods, during the period from 1988–2019. By producing and analyzing the maps of the regions, an integrated approach to geomatics and hydraulic modelling is employed. The following maps are used: Flood-prone urbanity from 1988–2019, a flood risk map of Wadi Nu’man based on a risk matrix map, and a map of the proposed protection measures and alternatives in the study area. In order to achieve these goals, changes in the land use in the Wadi Nu’man basin were monitored by analyzing successive satellite images, taken by the US satellite, Landsat, in 1988, 1998, 2013, and 2019. Using a supervised classification, with the maximum likelihood method of ERDAS IMAGINE 2016, GIS was used in the production and analysis of soil maps, and geological and hydrological groups of drainage basins, as well as the hydrological model (HEC-HMS), were applied in calculating the hydrograph curve of the Wadi Nu’man basin. The flood water volumes and flow rates were estimated based on the SCS unit hydrograph, and the rain depth was analyzed and estimated for different periods. The hydraulic modeling program (HEC-RAS) was employed, when developing a two-dimensional model to calculate the speed, depth, and spread of the flood, in order to apply the risk matrix method. The recommendations based on this study give priority to the implementation of a flood prevention plan and the protection of infrastructure by maintaining the existing flood drainage facilities and establishing new drainage facilities to protect lives, property, and infrastructure. View Full-Text
Keywords: geomatics; wadi Nu’man basin; Mecca; hydraulic modelling; flood risk; urban areas; risk matrix geomatics; wadi Nu’man basin; Mecca; hydraulic modelling; flood risk; urban areas; risk matrix
►▼ Show Figures 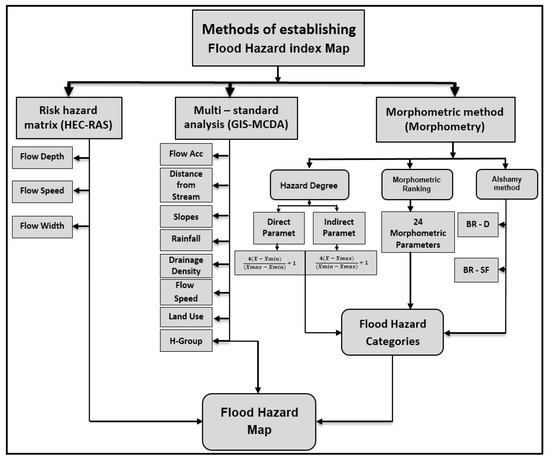