The Stable Isotopic Composition of Different Water Bodies at the Soil–Plant–Atmosphere Continuum (SPAC) of the Western Loess Plateau, China
Next Article in Special Issue

The surface circulation and the thermohaline properties of the water masses of the eastern Levantine Sea (Mediterranean Sea) were monitored with mobile autonomous systems (surface drifters and gliders) during the period September 2016–August 2017. The drifters provided data for more than a year and revealed complex circulation features at scales ranging from the basin scale to the sub-mesoscale. Three drifters were captured in a semi-permanent gyre (Cyprus Eddy) allowing a quantitative study of its kinematics. During the experiment, three gliders were operated, in two different periods: September to December 2016 and February to March 2017. The autonomous instruments crossed the prevailing sub-basin structures several times. The collected in-situ observations were analyzed and interpreted in concert with remote sensing products (sea surface temperature and altimetry). The evolution of some of the prevailing features confirmed the complexity of the circulation of the basin. The Cyprus Eddy is the most persistent anticyclone, moving its geographical position and sometimes merging with the North Shikmona Eddy in a bigger structure. The gliders sampled this wide anticyclonic feature revealing its vertical structure in the two different periods. In fall, in stratified conditions, a high salinity core is evident below the thermocline. The isopycnals are characterized by an upward bending over the high salinity lens and a downward bending below it, typical of an anticyclonic modewater eddy. In winter, the core disappears following the vertical mixing that, homogenizes the upper Cyprus Eddy water down to 300 m. View Full-Text
Keywords: Mediterranean Sea; drifters; sub-basin-scale eddies; gliders Mediterranean Sea; drifters; sub-basin-scale eddies; gliders
►▼ Show Figures 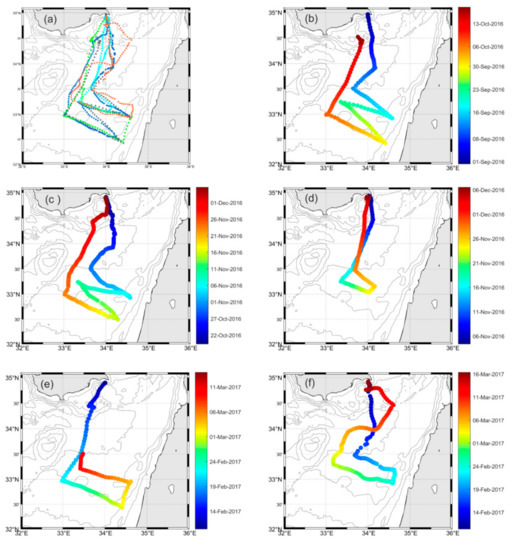