Scour at Bridge Foundations in Supercritical Flows: An Analysis of Knowledge Gaps
Next Article in Special Issue

Southern Adriatic (Eastern Mediterranean Sea) is a region strongly dominated by large-scale oceanographic processes and local open-ocean dense water formation. In this study, picoplankton biomass, distribution, and activity were examined during two oceanographic cruises and analyzed in relation to environmental parameters and hydrographic conditions comparing pre and post-winter phases (December 2015, April 2016). Picoplankton density with the domination of autotrophic biomasses was higher in the pre-winter phase when significant amounts of picoaoutotrophs were also found in the meso-and bathy-pelagic layers, while Synechococcus dominated the picoautotrophic group. Higher values of bacterial production and domination of High Nucleic Acid content bacteria (HNA bacteria) were found in deep waters, especially during the post-winter phase, suggesting that bacteria can have an active role in the deep-sea environment. Aerobic anoxygenic phototrophic bacteria accounted for a small proportion of total heterotrophic bacteria but contributed up to 4% of bacterial carbon content. Changes in the picoplankton community were mainly driven by nutrient availability, heterotrophic nanoflagellates abundance, and water mass movements and mixing. Our results suggest that autotrophic and heterotrophic members of the picoplankton community are an important carbon source in the food web in the deep-sea, as well as in the epipelagic layer. Besides, viral lysis may affect the activity of the picoplankton community and enrich the water column with dissolved organic carbon. View Full-Text
Keywords: picoplankton community; deep-sea; Southern Adriatic; Mediterranean Sea picoplankton community; deep-sea; Southern Adriatic; Mediterranean Sea
►▼ Show Figures 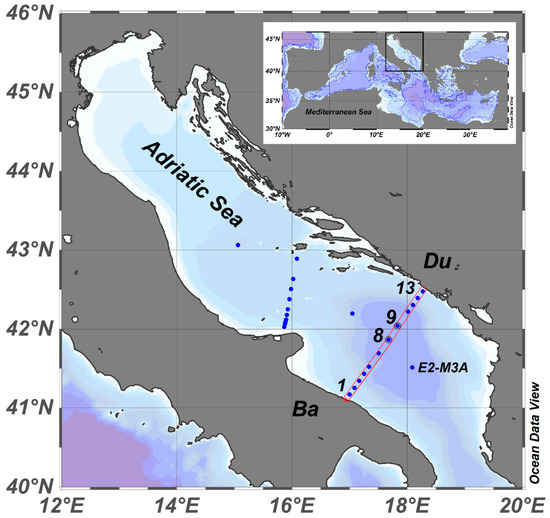