The single-well push-pull tracer test is a convenient and cost-effective tool to estimate hydrogeological properties of a subsurface aquifer system. However, it has a limitation that test results can be affected by various experimental designs. In this study, a series of laboratory-scale push-pull tracer tests were conducted under various conditions controlling input tracer density, pumping rate, drift time, and hydraulic gradient. Based on the laboratory test results, numerical simulations were performed to evaluate the effects of density-induced plume sinking and pumping rate on the proper estimation of groundwater background linear velocity. Laboratory tests and numerical simulations indicated that the actual linear velocity was underestimated for the higher concentration of the input tracer because solute travel distance and direction during drift time were dominantly affected by the plume density. During the pulling phase, reasonable pumping rates were needed to extract the majority of injected tracer mass to obtain a genuine center of mass time (tcom). This study presents a graph showing reasonable pumping rates for different combinations of plume density and background groundwater velocity. The results indicate that careful consideration must be given to the design and interpretation of push-pull tracer tests. View Full-Text
Keywords: push-pull test; tracer test; groundwater velocity; density; pumping rate push-pull test; tracer test; groundwater velocity; density; pumping rate
►▼ Show Figures 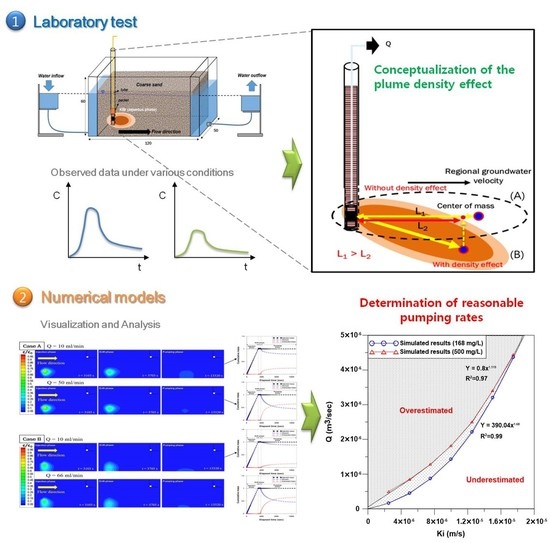