Community Engagement in WASH Emergencies: Understanding Barriers and Enablers Based on Action Research from Bangladesh and the Democratic Republic of Congo (DRC)

Sodium hypochlorite (NaOCl) and sodium dichloroisocyanurate (NaDCC) are commonly used for household water treatment (HWT); chlorine dioxide (ClO2) is a potential new HWT option. We compared the residual maintenance of NaOCl, NaDCC, and ClO2 over 24 hours using recommended dosages (2 and 4 mg/L) in waters of varying turbidity (0–300 NTU, from kaolin clay or creek-bottom sediments) and total organic carbon (TOC) concentrations (0–100 mg/L), for a total of 324 reactors. NaOCl and NaDCC had similar free chlorine decay rates, and ClO2 decayed more rapidly across all of the tested conditions. Little variability was observed across clay-based turbidity levels and TOC concentrations. With a dosage of 2 mg/L, a residual ≥0.2 mg/L was maintained at 30 NTU for NaOCl and 100 NTU for NaDCC; for ClO2, 4 mg/L were required to maintain ≥0.2 mg/L under all conditions except at zero turbidity. Comparisons with data from the literature suggest that the three compounds would inactivate E. coli, rotavirus, and Giardia cysts within 1 hour under all conditions, except 300 NTU for NaOCl and NaDCC. All three disinfectants are similarly efficacious for this usage; however, differences are seen in decay rates that may influence disinfectant selection depending on water storage time.
Keywords: chlorination; chlorine; chlorine dioxide; decay; disinfection; household water treatment; sodium dichloroisocyanurate; sodium hypochlorite; residual chlorination; chlorine; chlorine dioxide; decay; disinfection; household water treatment; sodium dichloroisocyanurate; sodium hypochlorite; residual

From June to December 2016, we prepared 10-L reactors with two types of added turbidity at five different turbidity levels and three added TOC concentrations, then treated these with one of three disinfectants at the CDC/WHO recommended dosage (Figure 1), and measured the disinfectant residual at 1, 2, 4, 8, and 24 hours after disinfectant addition. As there was no difference in the turbidity type at 0 NTU, 162 conditions were tested in duplicate, for a total of 324 reactors.

To represent various turbidity types seen in surface water used for drinking in low-resource settings, reactors were spiked with laboratory-grade white kaolin clay (Lion China Clay USP, Charles B. Chrystal Co., Larchmont, NY, US) or creek bottom sediments collected from the Mystic River (Medford, MA, US). The 0, 10, 30, 100, and 300 NTU targets were set to be consistent with previous research and with chlorine dose breakpoints [16,32,33]. Pre-testing was conducted to determine the amount of clay/sediments required to obtain turbidity targets in reactors using a calibrated Hach 2100 portable turbidimeter (Loveland, CO, US).
Twenty-four hours before each testing day, creek bottom sediments were collected from a consistent location on the Mystic River. Using a plastic scoop, one inch of the soil layer where the river met the bank was removed to eliminate any rocks. The softer soil below was then scooped into a gallon-sized Ziploc™ bag (Racine, WI, US) and transported to the laboratory. On each testing day, clay or sediments were added, and the turbidity was confirmed to be within 10% of the target. If any results were outside this range, the reactor was recreated.

To obtain the desired added TOC concentration, an appropriate amount of 10,000 mg/L TOC stock solution comprised of 1,2 bensenedicarboxylic acid, monopotassium salt (2.11% wt) and phosphoric acid (0.27% wt) was pipetted into each reactor (Hach, Loveland, CO, USA) [34]. The 0, 10, and 100 mg/L concentrations were selected to encompass the range of naturally occurring waters [35]. After addition, each opaque reactor was covered with cardboard to protect the TOC molecules from light.

The CDC/WHO recommended dosages of 2 and 4 mg/L for clear and turbid water, respectively, were tested for each disinfectant under all turbidity and TOC conditions. To determine the volume of the NaOCl solution (“bleach”) to add to reactors, the Hach digital titration method 8209 (Loveland, CO, USA) was used to measure the total chlorine concentration in a laboratory-grade NaOCl solution (Val Tech, Zelienople, PA, US) and the dilution factors were calculated. For NaDCC, the number of non-expired Aquatabs™-brand tablets (Medentech, Ireland) to add to the reactors was calculated, and the dosages were confirmed by measuring the total chlorine residual five minutes after addition to chlorine demand-free water, using a calibrated LaMotte 1200 colorimeter with DPD-1 and DPD-3 (N,N-diethylparaphenylene diamine) tablets (Chestertown, MD, USA). Pre-testing was conducted with chlorine demand-free water to determine the appropriate volume of liquid ClO2 product (Xinix AB, Rosersberg, Sweden) to add to the reactors in order to achieve target dosages. The determined dosages were added and confirmed using the colorimeter with DPD-1.

Immediately before disinfectant addition, the temperature and pH in each reactor were measured using a thermometer and a calibrated Hanna multi-meter (Bedfordshire, UK). After disinfectant addition, FCR or ClO2 were measured at 0, 1, 2, 4, 8, and 24 hours using the LaMotte colorimeter following methods approved by the United States Environmental Protection Agency (EPA) for disinfectant residual testing, namely the Standard Method 4500-Cl-G for FCR, and 4500-ClO2-D for ClO2 [36,37]. Please note that for ClO2 measurements, we did not use glycine as recommended in Standard Method 4500-ClO2-D, because this is intended to neutralize free chlorine, which was not present in the MilliQ water used in our experiments. Standard Methods include zeroing the colorimeter with the water sample as a blank before adding the DPD-1 to minimize turbidity/TOC interference in the test.
Measurements were reported in mg/L at two significant digits, as determined to be the accuracy and precision of the meter in previous research [38]. Temperature, pH, and turbidity were measured 24 hours after addition (as described above). All meters were calibrated daily.

All data were entered and graphs prepared in Microsoft Excel (Redmond, WA, US). Statistical analyses were run in STATA 14.1 (StataCorp LP, College Station, TX, US). FCR and ClO2 decays were evaluated by fitting the mean of the duplicate measurements obtained at 0, 1, 2, 4, 8, and 24 hours for each disinfectant, dosage, turbidity type, turbidity level, and added TOC concentration to a first-order model.
Three different metrics were then used to assess the results: 1) Whether decay rates differed between tested compounds; 2) whether measured residual concentrations exceeded the WHO/CDC-recommended minimum for FCR of 0.2 mg/L after 24 hours; and, 3) whether the dose and contact time (CT-factor) were sufficient to inactivate representative bacteria, virus, and protozoa. Each of these metrics is further described below.
First-order decay constants k were determined by fitting the following first-order decay equation for each dosage, turbidity type, and turbidity level: where Ct is the FCR concentration at time t (in hours), and C0 the initial FCR concentration.
Disinfectant decay rates were compared using an analysis of covariance (ANCOVA) with both time and the natural log of residual concentrations as covariates. Tukey’s post-hoc tests were used to determine which disinfectants differed, if any.
For each dosage, type, and turbidity, the measured residual after 24 hours was compared to the CDC/WHO guideline target of a minimum of 0.2 mg/L. A particular point of investigation was assessing “policy-relevant” differences, where one disinfectant met the minimum concentration and another did not.
Lastly, to compare disinfectant efficacy in disinfecting water, we calculated the CT-factors. The CT-factor is the multiple of the disinfectant concentration and the exposure time, and quantifies the contact time and the dose needed to inactivate the organisms [39]. CT-factors were calculated for the 1-hour and 24-hour time points for all of the tested combinations of turbidity and dosage by multiplying the measured FCR or chlorine dioxide residual concentration at each point by 60 minutes (for the 1-hour time point) or 1,440 minutes (for the 24-hour time point), respectively. Please note this is a conservative calculation, as the residual concentration at the end time point was used for the whole time.
These results were compared to known CT-factors for selected bacteria (Escherichia coli), virus (human rotavirus), and protozoa (Giardia lamblia). We chose E. coli because it is the standard bacteria to use for water quality analysis [17], human rotavirus because it is the etiologic agent most responsible for childhood diarrhea in developing countries [40], and Giardia cysts because they are common, and chlorination is not effective against any of the Cryptosporidium spp. [39].

In total, 324 reactors were tested (as shown in Figure 1 in Methods). All reactors met the desired criteria for turbidity on first creation, except for three (0.9%), which were prepared again.

Free chlorine decays over time in all of the samples (Figure 2). There is little variation between samples with different added TOC concentrations and different turbidities created with clay (Figure 3, Figure S1). As such, samples with creek bottom sediments at the added TOC concentration 10 mg/L are presented in Figure 2 (please note all data and results are available from the authors). As can be seen, NaOCl and NaDCC decay curves appear similar, with increasing decay at increasing turbidities, and chlorine dioxide decays more rapidly across all turbidities.
First-order decay constants k are calculated from duplicates across the three added TOC levels (n = 6) for each dosage and turbidity condition (Table 2). Significant differences between disinfectants (p ≤ 0.0004) are detected for all dosage and turbidity conditions by ANCOVA. Post-hoc test results indicate that ClO2 decay rates are significantly different from those of NaOCl and NaDCC under all but two cases (for both dosages at a turbidity of 100 NTU from creek-bottom sediments). NaOCl and NaDCC decay rates are statistically significantly different under 5 out of 18 cases, at both dosages with 30 and 100 NTU sediment and at 4 mg/L dosage with 300 NTU sediment. All p-values from the post-hoc test are reported in Table S1.

For NaOCl and NaDCC, the mean FCR concentrations after 24 hours are ≥0.2 mg/L in all reactors without added turbidity and with clay-based turbidity (Table 3). Residuals are <0.2 mg/L in all reactors with sediments at 300 NTU, and for three of the four conditions at 100 NTU (at both dosages for NaOCl, at the low dosage only for NaDCC).
For ClO2, 7 of 9 cases at 2 mg/L dosage have <0.2 mg/L, the two remaining cases (no turbidity and 300 NTU clay) have <0.3 mg/L. At 4 mg/L dosage, 8 of 9 cases are ≥0.2 mg/L, with the exception of the 300 NTU sediment. Upon observation, ClO2 is more consistent across each turbidity type and level than NaOCl and NaDCC.

The following are available online at https://www.mdpi.com/2073-4441/11/6/1309/s1, Table S1: Comparison of disinfectants: p-values from the post-hoc Tukey test. Table S2: Calculated CT factors for the three disinfectants under all tested conditions. Figure S1: Disinfectant residual concentration over time at varying turbidity from clay and varying added TOC for the 4 mg/L dosage.

This research received no external funding. It was supported by the Tufts Summer Scholars program and the Cataldo Fellowship (both internal research support programs at Tufts University). 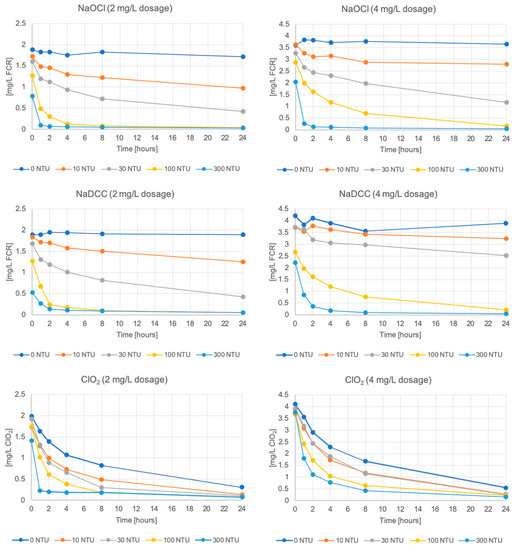