A two-dimensional wave model coupled with ice dynamics is developed to evaluate ice effects on shallow water wave propagation on a beach and in a channel. The nonlinear Boussinesq equations with ice effects are derived and solved by the hybrid technique of the Godunov-type finite volume method and finite difference method with the third-order Runge–Kutta method for time integration. The shock capturing method enables the model to simulate complex flows over irregular topography. The model is capable of simulating wave propagations accurately, including non-hydrostatic water pressure and wave dispersions. The ice dynamic module utilizes a Lagrangian discrete parcel method, based on smoothed particle hydrodynamics. The Boussinesq wave model is validated with an analytical solution of water surface oscillation in a parabolic container, an analytical solitary wave propagation in a flat channel, and experimental data on tsunami wave propagations. The validated model is then applied to investigate the interaction between ice and tsunami wave propagation, in terms of ice attenuation on tsunami wave propagations over a beach, ice deposition on the beach driven by the tsunami wave, and ice jam formation and release in a coastal channel with the intrusion of the tsunami wave. The simulated results demonstrated the interactions between tsunami waves and surface ice, including the maximum run up, ice movement along the beach, and ice jamming in a channel. View Full-Text
Keywords: Boussinesq model; ice dynamics; ice jam; tsunami wave; ice–wave interactions Boussinesq model; ice dynamics; ice jam; tsunami wave; ice–wave interactions
►▼ Show Figures 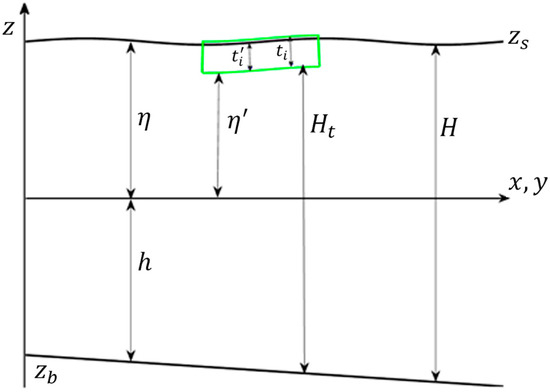