Strategies, Processes, and Results for the Future Water Supply of the Växjö Municipality: Evaluation of an Evidence-Based Case Study of Long-Term Strategies within the Water and Wastewater Sector in Sweden
Previous Article in Journal

Review of the Quantitative Resilience Methods in Water Distribution Networks

Urban rivers are valuable elements of urban ecosystems and play a key role in urban socio-economic development. Unfortunately, the functional integrity of urban rivers is being threatened by extensive human activities associated with the social development. Urban river health evaluation is important, as it may provide policy makers with information that is fundamental for river governance and the protection of urban ecosystems. To this purpose, we first constructed an urban river health assessment index system based on the pressure–state–response (PSR) framework. Secondly, we developed an urban river health index (uRHI) using the improved fuzzy matter–element extension assessment model. Finally, we used the uRHI to assess the health state of the Jialu River from 2008 to 2017 in Zhengzhou City, China. The results indicate that the health state of the Jialu River was improved from an unhealthy state in 2008 to a sub-healthy state in 2017. The pressure, state, and response subsystems developed towards a healthier state from 2008 to 2017, thanks to the implementation of a number of actions by the local government. However, the overall health status of the Jialu River is still relatively low. The Jialu River also faces several pressures, such as substantial Chemical Oxygen Demand (COD) emissions and sewage discharge. This paper concludes that it is necessary to further strengthen the health management of the Jialu River and the protection of Zhengzhou’s water environment. View Full-Text
Keywords: urban river health; PSR framework; improved fuzzy matter-element extension model; Jialu River urban river health; PSR framework; improved fuzzy matter-element extension model; Jialu River
►▼ Show Figures 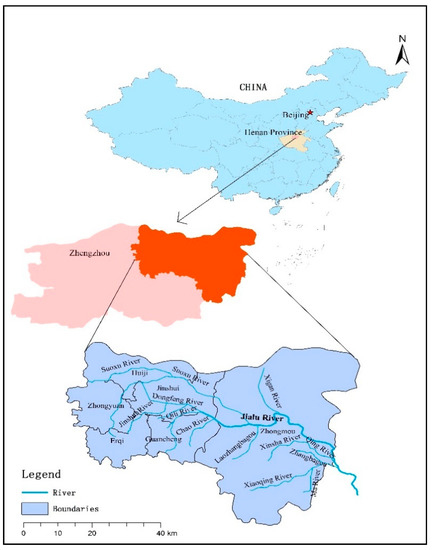