Infiltration and groundwater have been widely considered as the main factors that cause shallow landslides; however, the effect of runoff has received less attention. In this study, an in-house physical-process-based shallow landslide model is developed to demonstrate the influence of runoff. The model is controlled by coupling the shallow water equation (dynamic) and Richards’ equation. An infinite slope stability analysis is applied to evaluate the possibility of regional landslides. A real, small catchment topography is adopted as a demonstration example. The simulation illustrates the variations of runoff and the factor of safety (FS) during a storm. The results indicate that, after the surface becomes saturated, the FS may keep varying due to the increasing pressure head, which is caused by increasing surface water depth. This phenomenon most likely occurs downstream where the slopes easily accumulate water. The depth of the surface water may also be a factor of slope failure. Therefore, it is essential to increase the accuracy of calculating the runoff depth when assessing regional shallow landslides. View Full-Text
Keywords: shallow landslides; unsaturated soil; rainfall–runoff; physical model shallow landslides; unsaturated soil; rainfall–runoff; physical model
►▼ Show Figures 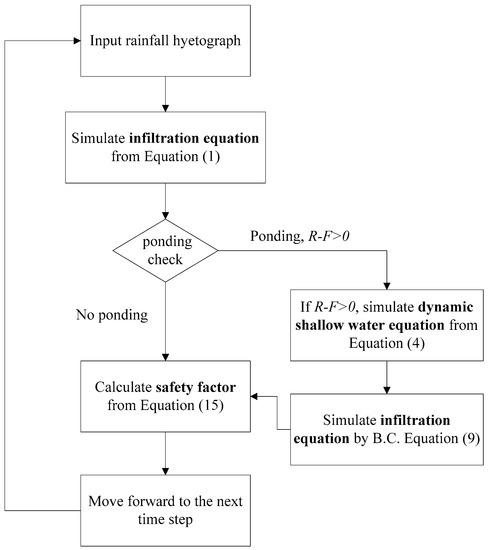