Soil salt crusts have been shown to have a strong influence on evaporation and water movement in soils, and this has attracted considerable attention. However, there is little information available on these processes during flooding. The objective of this study was to investigate the evaporation rate, variation in the groundwater table, and soil water content of salt-crusted soil flooded by five floodwater depths: 2 mm (Treatment A), 6 mm (Treatment B), 10 mm (Treatment C) 14 mm (Treatment D), and 18 mm (Treatment E). The experiments were carried out using repacked homogeneous silt loam soil columns in the laboratory. The experimental results showed that salt crust formation led to a low evaporation rate. The salt crust tended to form a dome, and some breakage occurred when the salt crust was dry. The broken crust increased the evaporation rate, indicating that the evaporation occurred below the crust. The soil moisture did not significantly change in the soil profile from 20 to 70 cm during the experimental period, which indicated that the existence of the evaporation front located in a layer very close to the surface. The evaporation rate rapidly increased when floodwater was added to the soils and returned to its previous low value after the salt crust reformed. However, before the salt crust reformed, there was a total water loss of 2.1, 4.3, 6.6, 10.1, and 13.8 mm for treatments A, B, C, D, and E, respectively, indicating that only a portion of the floodwater evaporated; another portion of the floodwater was discharged into the groundwater, causing the groundwater table to rise, although only by a small amount (6 mm). Therefore, the groundwater recharge caused by flooding should be considered. Otherwise, groundwater consumption may be overestimated. View Full-Text
Keywords: soil salinization; soil precipitation; groundwater consumption; soil water content soil salinization; soil precipitation; groundwater consumption; soil water content
►▼ Show Figures 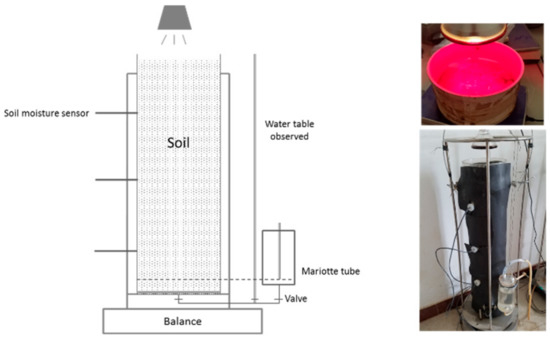