Looking Beyond Energy Efficiency: An Applied Review of Water Desalination Technologies and an Introduction to Capillary-Driven Desalination

Most notable emerging water desalination technologies and related publications, as examined by the authors, investigate opportunities to increase energy efficiency of the process. In this paper, the authors reason that improving energy efficiency is only one route to produce more cost-effective potable water with fewer emissions. In fact, the grade of energy that is used to desalinate water plays an equally important role in its economic viability and overall emission reduction. This paper provides a critical review of desalination strategies with emphasis on means of using low-grade energy rather than solely focusing on reaching the thermodynamic energy limit. Herein, it is argued that large-scale commercial desalination technologies have by-and-large reached their engineering potential. They are now mostly limited by the fundamental process design rather than process optimization, which has very limited room for improvement without foundational change to the process itself. The conventional approach toward more energy efficient water desalination is to shift from thermal technologies to reverse osmosis (RO). However, RO suffers from three fundamental issues: (1) it is very sensitive to high-salinity water, (2) it is not suitable for zero liquid discharge and is therefore environmentally challenging, and (3) it is not compatible with low-grade energy. From extensive research and review of existing commercial and lab-scale technologies, the authors propose that a fundamental shift is needed to make water desalination more affordable and economical. Future directions may include novel ideas such as taking advantage of energy localization, surficial/interfacial evaporation, and capillary action. Here, some emerging technologies are discussed along with the viability of incorporating low-grade energy and its economic consequences. Finally, a new process is discussed and characterized for water desalination driven by capillary action. The latter has great significance for using low-grade energy and its substantial potential to generate salinity/blue energy. View Full-Text
Keywords: capillary-driven desalination; energy grade; viable desalination; emerging technologies capillary-driven desalination; energy grade; viable desalination; emerging technologies
►▼ Show Figures 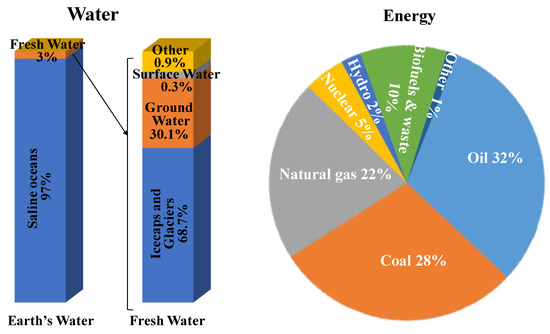 Ahmadvand, S.; Abbasi, B.; Azarfar, B.; Elhashimi, M.; Zhang, X.; Abbasi, B. Looking Beyond Energy Efficiency: An Applied Review of Water Desalination Technologies and an Introduction to Capillary-Driven Desalination. Water 2019, 11, 696.


Ahmadvand S, Abbasi B, Azarfar B, Elhashimi M, Zhang X, Abbasi B. Looking Beyond Energy Efficiency: An Applied Review of Water Desalination Technologies and an Introduction to Capillary-Driven Desalination. Water. 2019; 11(4):696.