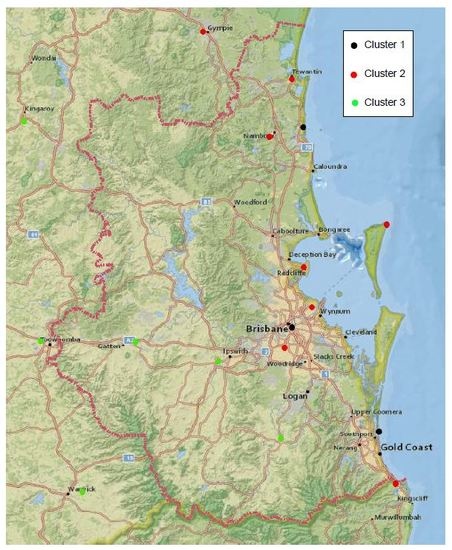 Southeast Queensland was selected as the study area. Southeast Queensland has an extensive meteorological station network with measurements taken in daily, 3 h, 30 min and 1 min (pluviography) formats. For this study, pluviographic rainfall data for 17 stations were collected from the Weather Station Directory of the Bureau of Meteorology (BoM), Australia, for the period between 2011 and 2015 primarily based on the availability of data. The stations used for this analysis and their geographical information are presented in Table 1.

Hierarchical clustering initially considers every single object as an individual cluster and successively merges the closest next cluster based on the Euclidean distance, as given in Equation (1), until they form a single cluster. This formation is typically presented in a dendrogram, which displays all sub-clusters and the order in which they merge. The proximity among the clusters is defined by three different approaches, namely, simple link, complete link and group average. Single link defines the proximities of the clusters based on the Euclidean distance between the closest two points of different clusters while the complete link defines the proximities based on the farthest points of different clusters. The group average determines the average pairwise Euclidean distance (for all objects) to measure the proximity of clusters.

The delineation of homogeneous regions in southeast Queensland was carried out using the conventional approach and the modified approach specifically designed to suit the requirements for WSUD, considering event-based rainfall characteristics.

In the conventional approach, the rainfall data of a set of the selected meteorological stations are tested for homogeneity purely based on the probabilistic characteristics of the continuous rainfall records. The method does not necessarily consider probabilistic characteristics of individual rainfall events.
Firstly, we performed the Hosking–Wallis heterogeneous test for the selected 17 stations in SEQ. The statistical indexes of heterogeneity, H1 and H2, were calculated for 500 simulations of realizations using the R-package ‘homtests’ [32]. The results suggested that the entire region could be treated as homogeneous, with H1 = 0.6483 and H2 = 0.9142. The codes executed to run the package are provided in Appendix A.

The entire southeast Queensland can be treated as a homogeneous region based on the conventional (continuous-rainfall) approach. However, based on individual rainfall characteristics such as antecedent dry days, maximum rainfall intensity, total rainfall and duration of the rainfall events, there were two separate homogeneous regions identified.
This implies that although the characteristics of the continuous rainfall data between stations were statistically similar, the event-based characteristics can have significant differences among stations. Therefore, the conventional approach in delineating rainfall homogeneous regions may be misleading in the context of Water Sensitive Urban Design. The newly proposed approach in this study is technically more robust and provides reliable results.
The outcomes of this study can also be broadly related in any rainfall homogeneous assessment. The most common use of homogeneous testing is regional frequency estimations. Many of the regional frequency analyses are based on the conventional Hosking and Wallis [1] regionalization approach including the revised Intensity-Frequency-Duration (IFD) estimates for Australia [34], where stations were grouped with the assumption that all the stations in the homogeneous regions have a similar probability distribution with a single scaling factor. However, as discussed, the current approach does not check the homogeneity based on individual rainfall characteristics. Therefore, the method adopted in this study can be effectively used in identifying homogeneous regions in the regional frequency analysis especially for studies that depend on the event-based characteristics of rainfall such as Water Sensitive Urban Design.
The newly proposed approach for identifying homogeneous rainfall region is more suitable in studies related to climate change. This is because the common outcomes from studies related to future rainfall trends suggest that although not many changes are expected in the overall rainfall characteristics, the rainfall patterns and characteristics are expected to change significantly in the future. Therefore, it will be more appropriate to apply the approach presented in this study in defining the rainfall homogeneous regions in the context of climate change.

The authors acknowledge the support of High Performance Computing and Advanced Research Computing group of the Queensland University of Technology.