Cost of Urban Wastewater Treatment and Ecotaxes: Evidence from Municipalities in Southern Europe
Next Article in Special Issue

The control of pressure at a remote critical node using a pressure control valve is a highly effective way to attain pressure management. To perform real-time control, various kinds of controllers can be used, including flow-dependent controllers. These controllers calculate valve setting adjustment based both on the deviation of the pressure from the set-point and on the flow rate at the valve site. After putting all the flow-dependent controllers present in the scientific literature within the same framework, this paper presents a numerical comparison of their performance under realistic conditions of stochastic demand. Two controllers were selected for the comparison, namely the simple LCF (parameter-less proportional controller with known constant pressure control valve flow); and LVF (parameter-less controller with known variable pressure control valve flow), which uses a flow rate forecast. Indeed, this study considered an upgrade of LVF, in which the flow rate forecast was tailored to the conditions of stochastic demand. The application in a specific example network proved the performance of these controllers to be quite similar, although LCF was preferable due to its simple structure. For LCF, the average pressure at the critical node had a clear relationship to the consumption pattern. LVF outperformed when the hourly variation dominates the fluctuations in the flow. The conditions under which this out-performance occurred are comprehensively discussed. View Full-Text
Keywords: hydraulic modelling; pressure control valve; pressure management; remote real-time control; stochastic consumption; water distribution system hydraulic modelling; pressure control valve; pressure management; remote real-time control; stochastic consumption; water distribution system
►▼ Show Figures 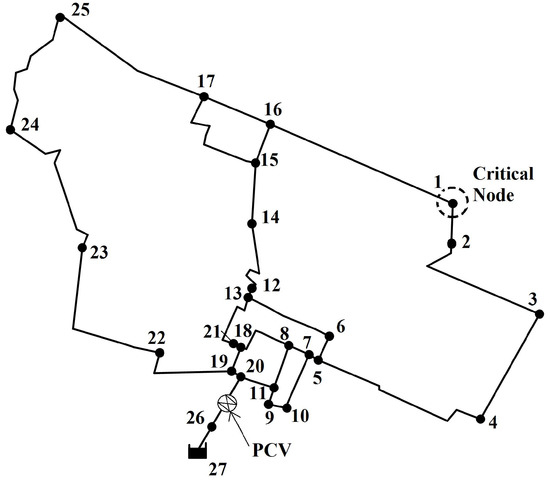