Anthropogenic Changes in a Mediterranean Coastal Wetland during the Last Century—The Case of Gialova Lagoon, Messinia, Greece
Next Article in Special Issue

This study assessed the uncertainty in the spatial pattern of rainfall trends in six widely used monthly gridded rainfall datasets for 1979–2010. Bangladesh is considered as the case study area where changes in rainfall are the highest concern due to global warming-induced climate change. The evaluation was based on the ability of the gridded data to estimate the spatial patterns of the magnitude and significance of annual and seasonal rainfall trends estimated using Mann–Kendall (MK) and modified MK (mMK) tests at 34 gauges. A set of statistical indices including Kling–Gupta efficiency, modified index of agreement (md), skill score (SS), and Jaccard similarity index (JSI) were used. The results showed a large variation in the spatial patterns of rainfall trends obtained using different gridded datasets. Global Precipitation Climatology Centre (GPCC) data was found to be the most suitable rainfall data for the assessment of annual and seasonal rainfall trends in Bangladesh which showed a JSI, md, and SS of 22%, 0.61, and 0.73, respectively, when compared with the observed annual trend. Assessment of long-term trend in rainfall (1901–2017) using mMK test revealed no change in annual rainfall and changes in seasonal rainfall only at a few grid points in Bangladesh over the last century. View Full-Text
Keywords: trend analysis; gridded rainfall data; Mann–Kendall test; Jaccard similarity index trend analysis; gridded rainfall data; Mann–Kendall test; Jaccard similarity index
►▼ Show Figures 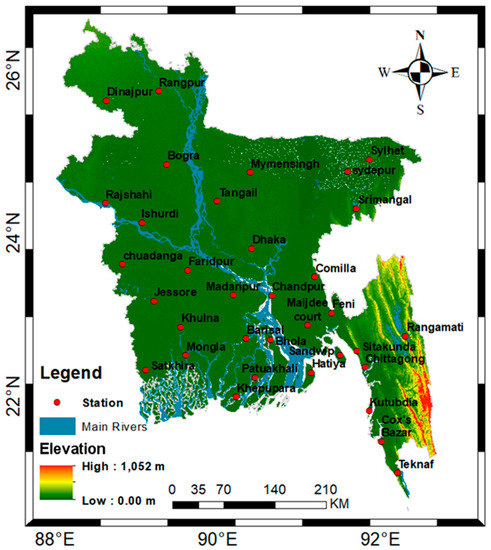